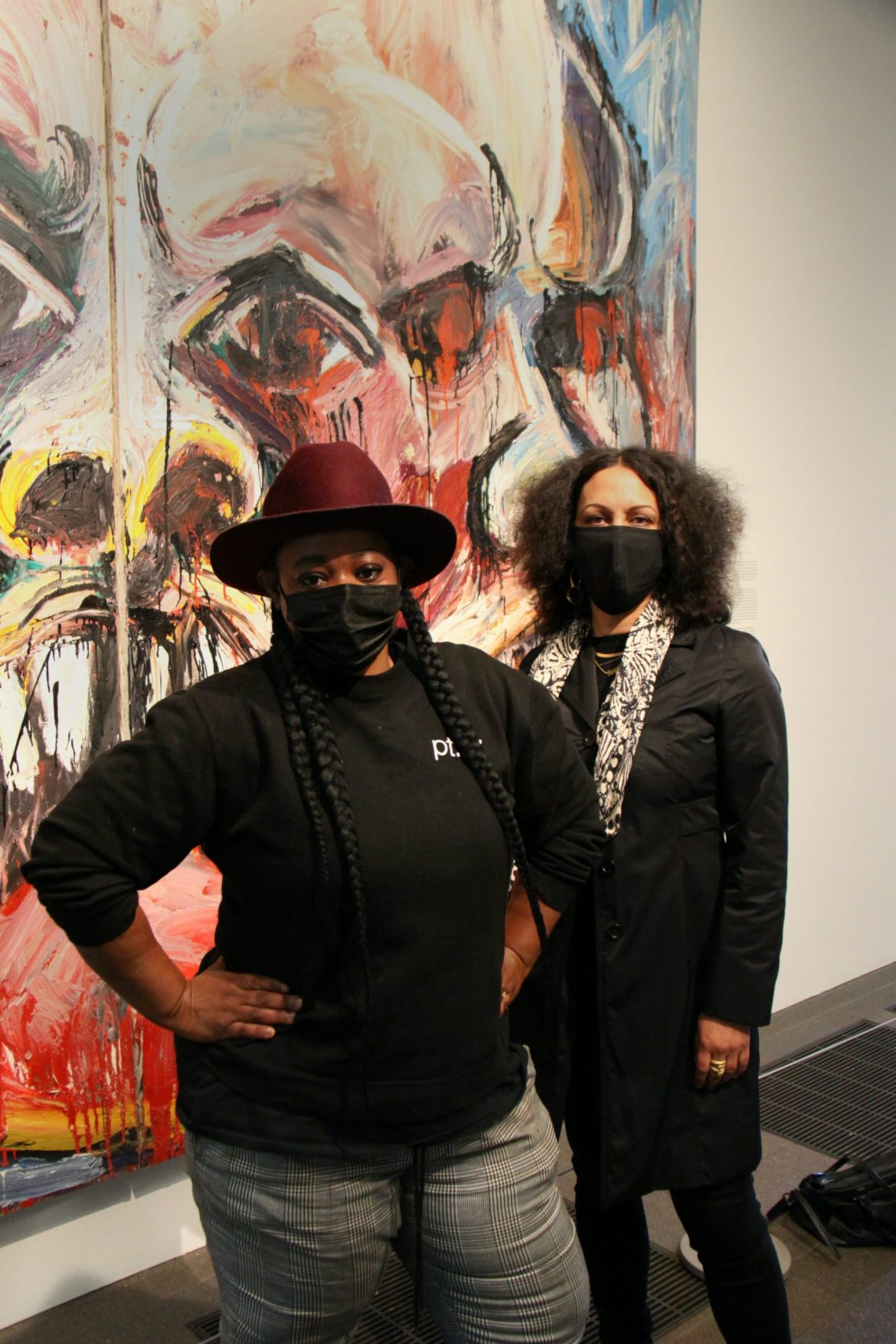 See Black Womxn co-founders Tahirah Rasheed and Angela Hennessy in front of Mike Henderson's "The Scream" at the de Young Museum in March 2021. See Black Womxn is partnering with the museum for a series of online discussions called "There Are Black Women in the Future." (Courtesy of Fine Arts Museums)

See Black Womxn began as a campaign by artists and activists in San Francisco to center and promote the work of Black women and Black women’s expression of humanity in their own narratives. San Francisco’s de Young Museum has partnered with #SeeBlackWomxn in a five-part weekly virtual series called “There Are Black Women in the Future” as a contribution to Virtual Wednesdays on YouTube.

The founders of See Black Womxn hope to make a long-term impact and open up the dialogue about the place of Black art in the landscape.

“This is a time when the Black artist, and Black art, is being scooped up by museums and galleries and event spaces,” co-founder and sculpture artist Dana King says. “We’re ‘it’ right now. But what is the impact of that? The long-term impact of that for Black artists right now? Because of all the global reckoning that’s occurred, protests around the world on the backs of traumatic incidents that have been happening for Black folks. We’re going to talk about that.”

The virtual experience, “There Are Black Women in the Future,” addresses the many questions about not just the impact on Black art but also Black womxn in art. In recent history, however, Black women’s art has not been prioritized.

Years after Dr. Maya Angelou’s passing, the City of San Francisco wanted to honor the poet and civil rights activist, placing a monument outside the San Francisco Public Library’s Main Library at 100 Larkin St. In a city with a diminishing Black population, it was also noted there is a lack of Black art in city sculptures. It was time to honor one of the city’s more prominent contributors to not only Black history but also American history. Dr. Angelou spent her formative years living in the Bay Area and went on to become San Francisco’s first Black female streetcar conductor, prior to her acting and writing career.

In 2019, Lava Thomas’ design for the monument to Dr. Angelou was selected for the project and then was later rejected by Supervisor Catherine Stefani, the legislative sponsor for the San Francisco Arts Commission project. A complaint asserted that Stefani had interfered with the process in favor of another artist. As a result, See Black Womxn was formed to advocate for the voices of Black women artists. In 2020, Thomas was re-awarded the project design, with an apology from Stefani.

“There Are Black Women in the Future” examines Black woman’s aesthetics and experiences using art from the past, as well as exploring what potentially is the future of Black art. The four See Black Womxn co-founders Tahirah Rasheed (also the co-founder of Calexo), Dana King, Angela Hennessy and Jamani Montague act as facilitators for the events, driving the panel discussions about Black arts and how Black women view themselves in the art.

“The goal of it is to speak honestly and authentically about our experiences and where, or if, there’s any alignment and to recognize that,” King says. “This is programming for us, by us.”

The first virtual event premiered March 10 and featured “Black Reactions,” a group of Black women panelists reacting to art from the de Young Museum’s collection and elsewhere. The subsequent episodes will feature a different Black experience through artistic expression — “Black Art Worlds” on April 14, “Black Deaths” on May 12, “Black Feminist Futures” on June 9 and “Black Forums” on July 21.

“The people that I’ve invited to participate are curators, they’re educators, they are makers,” King says. “They know who they are, and they know the work. They know how this rolls.”

The design of the program features Black womxn having an engaging conversation about art and the community impact. Rasheed opened the first virtual event with a mantra, “See Black women, hear Black women, trust Black women, love Black women, protect Black women, pay Black women.” Each phrase acts as a call to action for communities to work toward equity for Black women in spaces where we may become marginalized or silenced.

The theme song for the programming and the introduction song is “Earth Is Ghetto” by Aliah Sheffield, an internet hit song because of the relatable lyrics asking aliens to pick her up because the planet Earth is no longer tolerable or inhabitable.

March’s theme “Black Reactions” followed the viral trend of reaction videos, and the panel reacted to and discussed art.

The panelists, Chicago art appraiser Clinee Hedspeth, artist Olka Baldeh and entrepreneur Kamilah Mathais, all expressed their experiences through art and what they were seeing and posed questions about inspiration from their own experiences.

“We’re asking if it [the work of art] is representative for conveying and saying something about the experience of Black womxn, knowing the role of Black women in the arts,” she says. “Because a lot of times experiences might have been invisibilized or something that you were seeing might have even been stolen from black woman.”

* The Virtual Wednesday event will be released monthly and has begun March 10 with the final release occurring July 21. All virtual offerings will be available on the Fine Arts Museum of San Francisco’s YouTube page at https://www.youtube.com/channel/UCfYMP1FoFPlxUwed1BkWz5Q.