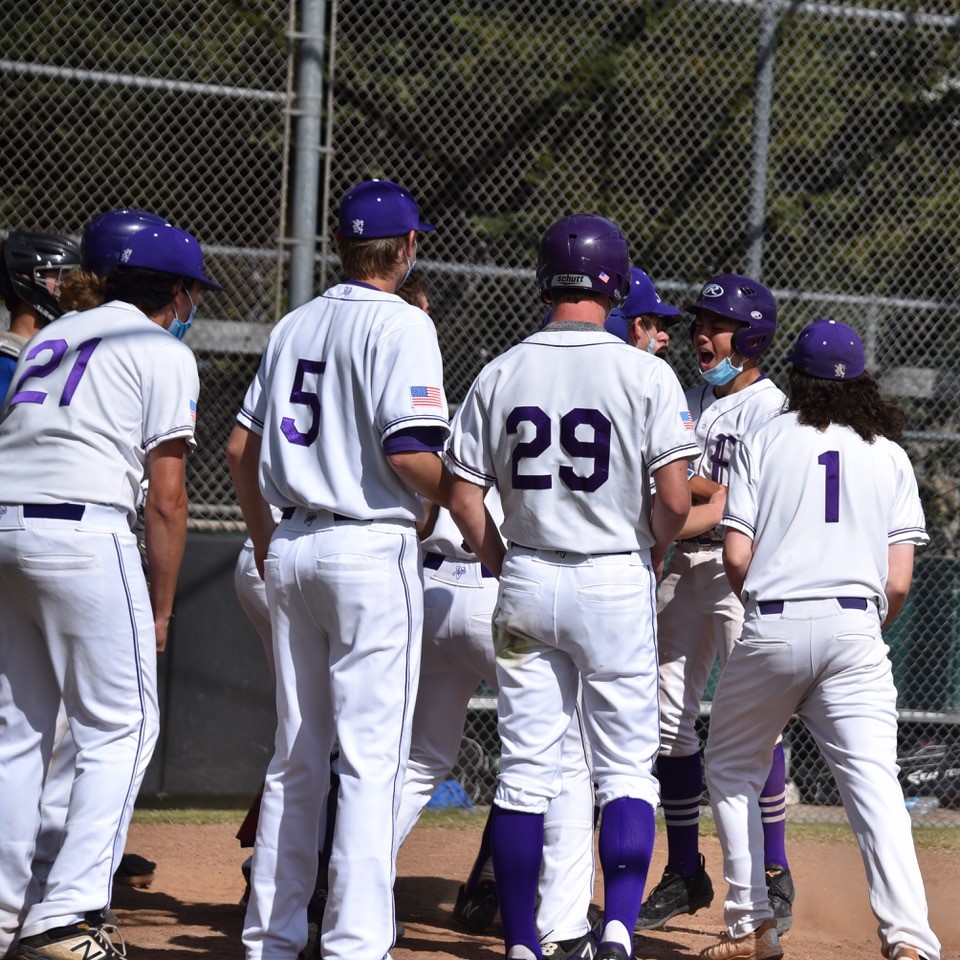 The Highlanders experienced three different types of games the week of March 29: A rout of Mt. Eden, a tough loss to Berkeley, and an exhilarating win against St. Joes. Piedmont’s record now stands at 6-2 for the season.

Playing at Mt. Eden on March 29, the Highlanders scored three in the top of the 1st and never looked back, winning 12-3. Third baseman Lars Derr had four of Piedmont’s 12 hits, scoring and driving in two. Second baseman Michael Aikawa had a hit, run, and RBI. Centerfielder Ben Levinson added a hit, two runs and two RBIs. Shortstop Nico DeFazio had a hit and an RBI. Catcher Davis Alazraqui notched a hit, scored one, and drove in two. Evan McConathy had a hit and a run, while brother Ryan McConathy added a hit and an RBI. And first baseman Garren Riley had two hits and scored two runs.

On the mound against the Monarchs, Alex Tafapolsky got the win, allowing just one hit and striking out four in four innings. Will Sprague followed with two innings, and Aiden Mitchell finished up in the seventh.

The Berkeley game was a pitching duel, with Berkeley starter Luca McKerley throwing a three-hit, 12-strikeout gem for the Yellow Jackets, who won 4-0. Piedmont starter Cal Barna pitched well, giving up four runs but only three hits over 4 and 2/3 innings, with eight strikeouts. Reliever Julian Scherman was impressive again, with three strikeouts in his 1 and 1/3 innings of work.

The Highlanders’ hits against Berkeley came from Aikawa, Mitchell, Evan McConathy, and Derr, who doubled off McKerley.

St. Joes was the game of the week, and likely the whole season so far. Piedmont fell behind 5-1 early, as a few costly errors combined with good St Joes at-bats to plate one in the first and four in the second. As in the Hayward game when the Highlanders came back from a 12-1 deficit, coach Eric Olson exhorted the team to chip away at the lead. And it worked again.

DeFazio drove in Aikawa with an infield single in the 3rd to make it 5-2. Sprague hit a hard line drive to left in the 4th, scoring Evan McConathy and narrowing St. Joes’ lead to 5-3. Barna lined a double to the left field fence in the 5th, plating Derr with Piedmont’s fourth run.

The Highlanders’ defense steadied after the tough first two innings, and starter Levinson held St. Joes scoreless from the 3rd through the 5th. He finished giving up five hits and striking out 10. Scherman worked around a lead-off double in the 6th, striking out two to keep the deficit at one run.

St. Joe’s starter Emmett Phinney also left after five innings, and reliever James Martin looked in control in Piedmont’s half of the 6th, retiring the first two batters. But Sprague drew a walk on a close full-count pitch, bringing up lead-off hitter Aikawa. Although not the biggest guy on the team, you wouldn’t know it as the sophomore launched Martin’s low fastball into the bright blue afternoon sky. The only question was whether the ball would hit high up on the wall and tie the game, or go over to put Piedmont ahead. Seconds later, the answer came as the ball bounced across the Wildwood playground behind Witter field, and Aikawa’s teammates swarmed him at the plate.

Barna struck out one in the 7th and earned the save. Scherman picked up the win in the 6-5 final.

Asked after the game if he thought he had that kind of power, Aikawa answered succinctly, “Yes. I had hit a ball high up on the fence during practice the day before, so I wasn’t that surprised. It was a great feeling to help my guys out like that and beat a really good St. Joes team.”

The Highlanders have four upcoming games, playing away at El Cerrito on April 6 and Encinal on April 7, then returning home to face Encinal again on April 9 and Castro Valley on April 10.