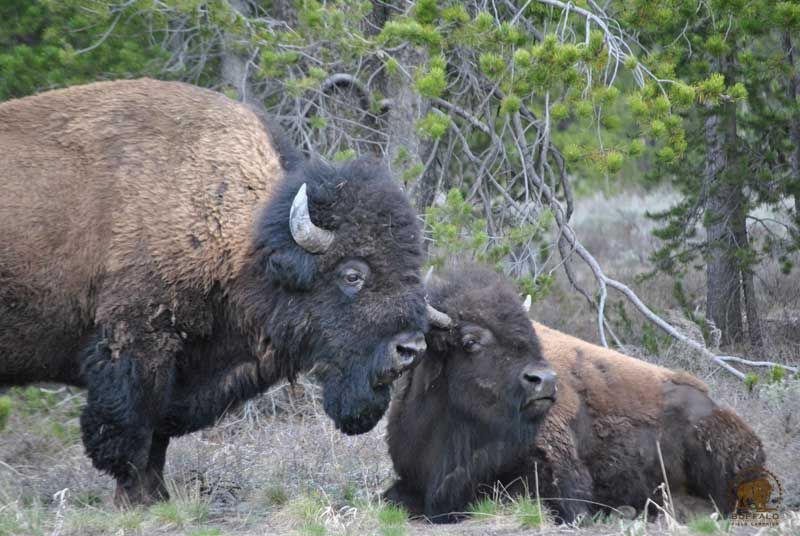 Directors Larry Laverty of Oakland and director Isaac Pingree of Alameda take a historical look at the past and the concerning future of the buffalo with their short, “Where Buffalo Roam.” (Courtesy of the Livable Planet Film Festival)

The shuttering of the San Francisco Green Film Festival, an unfortunate casualty attributed to the pandemic, left the Bay Area with a crater-sized hole given how this region prides itself on its forward thinking on environmental matters.

Never fear, the Livable Planet Film Festival is here, geared to entertain and enlighten. While it might seem like a bizarre time to start a film festival, Chris Metzler sees logic to it. He and Jeff Ross co-founded the fest.

“The pandemic might seem like a stranger time to launch a new film festival, but if there is one thing COVID-19 has highlighted is how interconnected we are in the world and how we have to work together to solve the big problems the Earth is facing,” Metzler says.

Appropriately launching on Earth Day (April 22), the SF IndieFest production will stream 67 indie features and short features through May 2. You can choose to purchase individual tickets ($10), score a festival pass ($45-$120) and support the fest with a donor pass ($220).

The programming reflects the feisty originality that defines SF IndieFest’s annual productions, which includes the genre fave Another Hole in the Head and SF DocFest, amongst others.

We felt that embracing character-driven and artful stories … might encourage folks to appreciate the planet we’re all living on and then decide to take action.

“We at SF IndieFest have always been a punk-rock style sort of organization, whether it be with the films we put on screen or how we work as a team,” Metzler says. “So in producing an environmental film festival like Livable Planet, we wanted to embrace the idea of keeping alive the independent spirit that launched the green movement.”

That’s reflected in how the program ventures away from the traditional.

“The films in the program run the gamut in regards to style, with the style originating from the filmmaker’s vision not so much focused on the issue,” he says. “Yeah, the issues are important, but we felt that embracing character-driven and artful stories, it might encourage folks to appreciate the planet we’re all living on and then decide to take action. Too often environmental films get the bad rap that [they are] all about shaming the audience and an ‘eat your vegetables they are good for you’ ethos.

“Instead, in watching the films we are sharing at Livable Planet, we wanted folks to wind up feeling hopeful and be entertained, maybe even laugh.”

A schedule with all the green goodies can be found at https://livableplanet2021.eventive.org/welcome.

This week’s Pass the Remote sinks its roots deep into the program. Here are a few recommendations:

The opening night feature — and awards contender — is a must. Nominated for a Truer Than Fiction award in this year’s Film Independent Spirit Awards, it’s a thoughtful, bracing and illuminating meditation on the Puerto Rico of today, as well as before and after Hurricane Maria powered though and ripped it apart. Filmmaker Cecilia Aldarondo and crew hang out with farmers, Bitcoin entrepreneurs, uneasy residents and luxury real-estate sellers — to name but a few — offering divergent thoughts and desires. What she uncovers by allowing the cameras to roll provides more clarity on this remarkable land and its remarkable people, both challenged by the interests of others. It’s dynamite. (Producer Ines Hofmann Kanna is an Oakland resident.) (For tickets, https://livableplanet2021.eventive.org/films/60105f186d26212edde486fa)

Double-dog dare you to wedge yourself into those skinny jeans and then watch the festival’s inspired Midnight Movie pick. Canadian director and co-writer Elza Kephart scores with her third feature, a bloody good and just bloody satire on big business apparel lines talking the talk about socially conscious clothing but deluding the masses and putting their profit over people who make the items. A trendy clothing store becomes the site for an unveiling of a new pair of “killer” jeans, ones possessed by an angry spirit out to kill. It’s a fleet 77 minutes and worth every second. (For tickets, https://livableplanet2021.eventive.org/films/60539968b9086800688ee080)

The delicate, complex and brittle balancing act required when supporting up-for-extinction marine life and other interests is the focus of David Abel and Andy Laub’s climate-change documentary. A 2020 Jackson Wild award winner — the equivalent of the Oscars for nature films — it receives the Centerpiece treatment. (For tickets, https://livableplanet2021.eventive.org/films/60490366fe834600521b83f9)

Stanford alums Lauren DeFilippo and Katherine Gorringe probe a topic we know well: how isolation affects us. But instead of viewing it from the perspective of a pandemic, their documentary follows six volunteers participating in a NASA simulation to see the effects astronauts might experience while venturing to Mars. The well-received documentary is the fest’s closing night feature. (For tickets, https://livableplanet2021.eventive.org/films/602694b34de70a003e5f8c50)

“I see only with my feet and my stick,” says French crab fisherman Christophe Leboucher, who is blind. He ventures out from March to November to capture crabs and lobsters cliffs in Etretat. Director Martin Benoist joins him on the hunt in an immersive midsize (52 minute) documentary that makes you feel like you’re there with both of them. It’s well-shot and compelling. (For tickets, https://livableplanet2021.eventive.org/films/603d5d9bbc4d7d0037e116cc)

“Eye of the Storm”

Beloved landscape artist James Morrison doesn’t give up on his creative passion even as his sight deteriorates in Anthony Baxter’s lovely tribute to him. This sensitive and emotional documentary captures the scope of his work, which included paintings that illustrate climate change, as well as the latter part of Morrison’s life when the Scottish artist strove to make that one final work — inside his studio and not outside. “Eye of the Storm” is a tender tale told well. (For tickets, https://livableplanet2021.eventive.org/films/606dd2e2b65b2e0030de69bc)

“What Should I Put in My Coffee?”

Prepare to rethink putting a splash of dairy into that morning cup of coffee after watching Jon Lanthier’s habit-changing documentary. Lanthier springboards from exploring that one issue to discussions on dairy farms and big-picture environmental issues by traveling through parts of the Pacific Northwest. It’s entertaining and might just find you switching to oat milk instead. (For tickets, https://livableplanet2021.eventive.org/films/603e85aa0a676a00750066d9)

“Tule Elk: The Killing of a Native Species”

Berkeley-born environmental author Kenneth Brower provides context and insight to Filipe DeAndrade’s eight-minute eyebrow-raiser. It focuses on the killing of tule elk in Point Reyes National Seashore, a plan to help clear the area for dairy cow grazing. Prepare to get that dander up. (For tickets, https://livableplanet2021.eventive.org/films/603d60b24b7bf4006b164945)

While directors Metzler, Quinn Costello and Jeff Springer were in Louisiana swamps chasing after nutria for their outstanding 2017 documentary “Rodents of Unusual Size,” they encountered Adam Morales. The result is this bittersweet short (three minutes) about the lone Spanish moss harvester. (For tickets, https://livableplanet2021.eventive.org/films/603d7b3acf5e04005a0557b0)