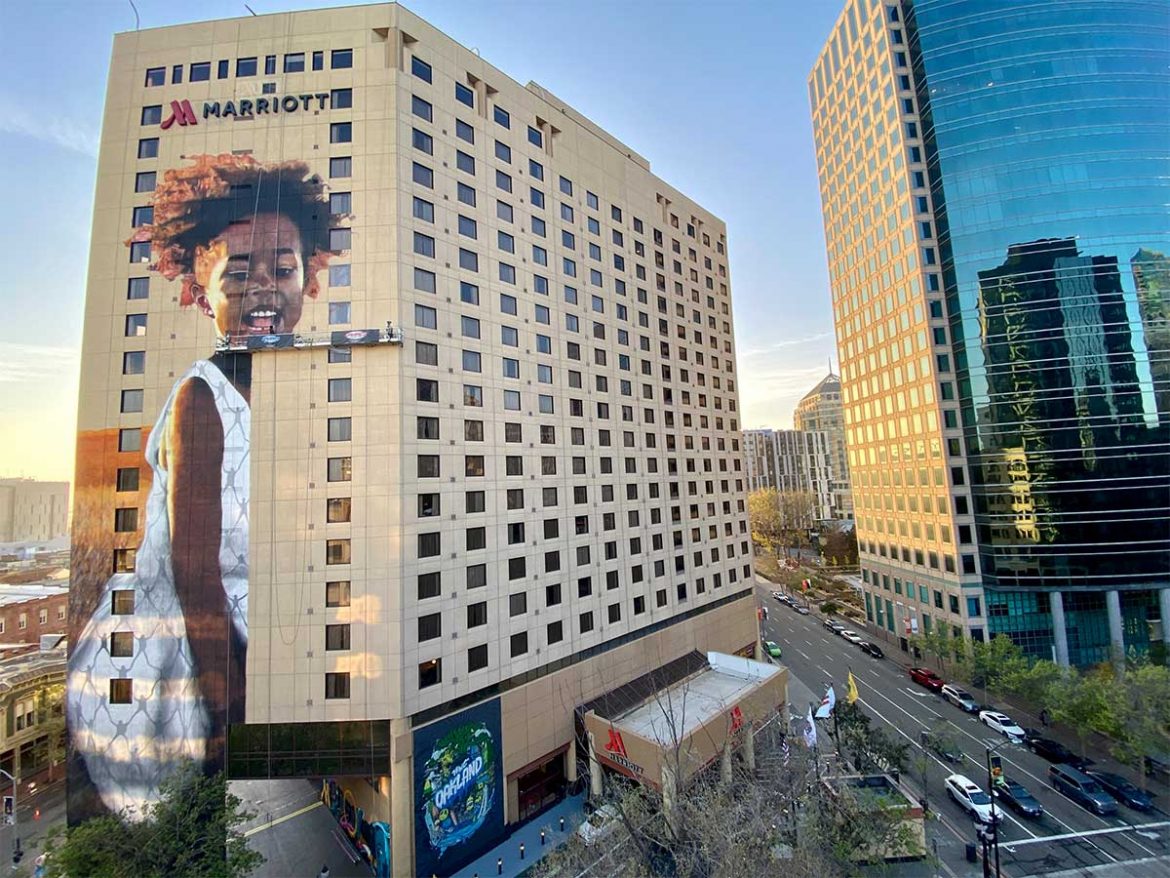 Work proceeds April 8 on a 21-story mural being painted on the side of the Oakland Marriott City Center at 1001 Broadway to bring attention to the global hunger crisis. The mural, which was dedicated Friday, is the city's tallest public artwork. (Photo courtesy of Street Art for Mankind)

The tallest mural in Oakland was completed this past week to bring attention to hunger, which the COVID-19 pandemic has exacerbated all over the world.

The 190-foot-tall mural by artist Victor Ash is painted on the side of the Oakland Marriott City Center at 1001 Broadway.

Food insecurity has been a problem for many people, especially minority groups, in Oakland who have suffered job loss or reduced hours due to the COVID-19 pandemic.

“The issue of hunger in the U.S. is particularly prominent in African American communities,” said Audrey Decker, whose organization Street Art for Mankind created the mural with partners Kellogg’s Company and the World Food Program USA.

According to the U.S. Department of Agriculture, Black people are twice as likely as non-Hispanic white people to face hunger. Nearly 24 percent of the population or about 100,000 people in Oakland identify as Black, according to the U.S. Census Bureau.

The mural depicts a Black girl running in a wheat field and holding a baton of wheat as a symbol of hope to pass to the next generation, Decker said.

“We are always trying to bring hope,” Decker said of the murals by Street Art for Mankind.

Decker also noted the pattern on the girl’s dress, which is open to individual interpretation. An interpretation exists, but Decker declined to disclose it, letting people discover one for themselves.

The mural is the tallest Ash has painted. He paints alone with the help of two people who help move the 40-foot platform he is on.

Decker said Ash paints like a printer, square foot by square foot. Residents may have noticed that he painted the left side of the mural first.

Oakland’s mural is just the third of six to be created in the U.S. by Street Art for Mankind and its partners.

The first was completed in New Orleans and a second in Houston. The last three will be created in Washington, D.C., Detroit and Battle Creek, Michigan, where Kellogg’s Company is based.

All the murals are dedicated to the United Nations’ Sustainable Development Goal 2, which is Zero Hunger. The U.N. World Food Programme, which won the 2020 Nobel Peace Prize, began its biggest operation ever last year, aiming to feed up to 138 million people this year.

Decker called the murals, “Big art for big heart” and “food for the soul.”

Mayor Libby Schaaf and others helped inaugurate the mural on Friday.