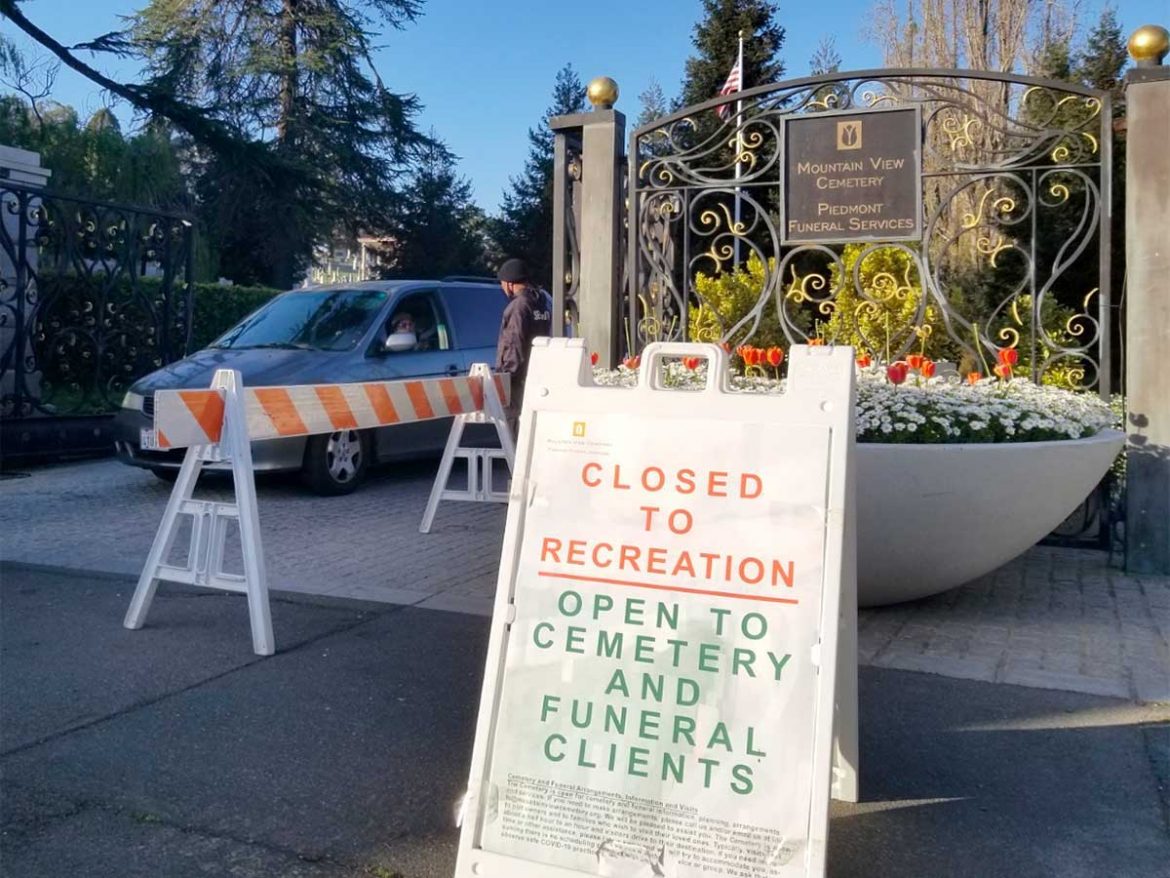 As public health restrictions prompted by the COVID-19 pandemic are being lifted all around the Bay Area, managers of one of Oakland’s most beloved gathering places — the historic Mountain View Cemetery — are working on a plan to allow the general public back in.

For more than a year now, the cemetery — which is also a favorite spot for walkers, cyclists and even picnickers — has been closed due to “COVID-19 and other operational reasons,” according to a statement on the cemetery’s website.

Over the past few months, fans of the cemetery have grown increasingly upset over what they see as an unnecessary public lock-out.

Letters to the editors of local publications have been published, emails to news outlets have been sent, articles have been written and local elected officials contacted, all in an effort to find out why the general public has been prevented from enjoying the cemetery’s picturesque environs and stunning views.

Plan for a ‘pilot’ reopening

On Friday, a lawyer for the privately-owned cemetery’s board of directors said in an email that they are “in favor of a pilot reopening to the public” and would likely have more details this week about when and how such a plan might work.

The news left at least one vocal Oakland resident hopeful for better access in the weeks to come, but also worried that cemetery managers could still leave room for future closures.

“The concept of a ‘pilot’ reopening still feels like a bit of a rebuke to the public. Like we have to behave ourselves or we’ll get locked out again or something,” said Brandy Olson, whose parents are buried at Mountain View and who has been visiting the cemetery regularly for years.

“I still object to their language and tone,” Olson said.

Early on in the pandemic, Olson said she reached out to the cemetery management about why, when other parks and open spaces were allowing people to partake in socially distanced activities, Mountain View remained closed.

She said those interactions were “unfriendly, accusatory and just stern.”

“They’d mostly just say ‘we’re not a park’ and hang up,” said Olson, who has been reaching out to like-minded residents in an effort to galvanize more public support for re-opening.

She said she believes the cemetery is using COVID-19 as an excuse and is holding the public use of the cemetery hostage in an on-going dispute with the city.

While the general public has been kept out, Olson and others with loved ones buried at Mountain View Cemetery have been able to visit gravesites, but only for a half-hour at a time, she said.

In a response to media coverage of the closure, Mountain View General Manager and Chief Executive Officer Jeff Lindeman posted a rebuttal on the cemetery website last December saying part of the problem is that the city of Oakland and complaints from neighbors “cost the cemetery millions of dollars in project delays, construction disruption, attorneys’ fees and costs,” among other things.

He also said keeping the meandering lanes and idyllic plots open to the public costs “well into six figures every year,” in part because people leave trash behind, cut fences to gain access, run their dogs off leash, scrawl graffiti and generally behave in ways that require staff time and money to remedy.

Lindeman urged people to reach out to Oakland Mayor Libby Schaaf and ask her to intervene on the cemetery’s behalf.

Schaaf has indeed heard from the public about the closure, according to spokesman Justin Berton.

“Our office has heard from residents who want the space to reopen and while the mayor is respectful to every business that has been challenged during the pandemic, she is also eager to see the cemetery return to its pre-pandemic policies,” Berton said in a statement.

The 226-acre cemetery, designed in 1863 by Frederick Law Olmsted — he also designed New York’s Central Park and San Francisco’s Golden Gate Park — has long been popular with walkers, joggers, picnickers, dogwalkers and people who just like to enjoy the park-like atmosphere.