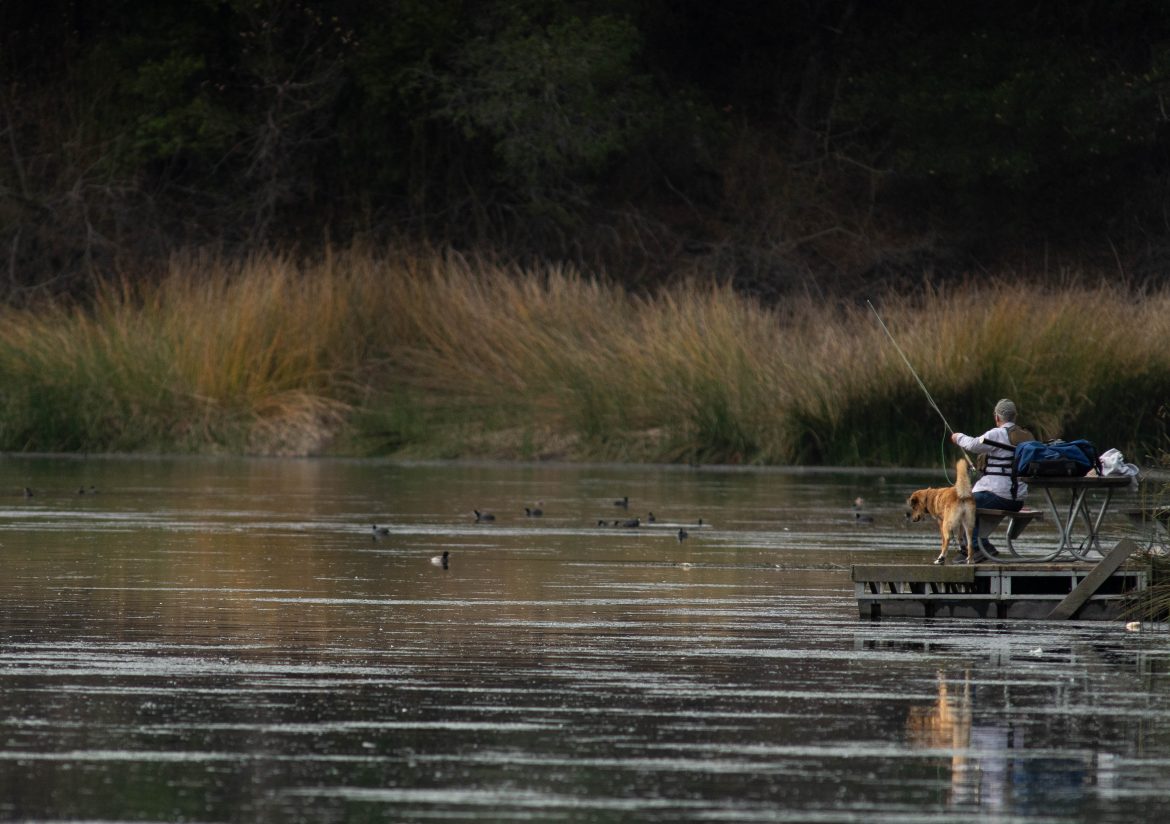 A man fishes with his dog at the Lafayette Reservoir in Lafayette Calif., on January 13, 2021. (Ray Saint Germain/Bay City News)

The East Bay Municipal Utility District officially declared a stage one drought Tuesday and is asking customers to cut water use by 10 percent after California experienced its driest winter since 1977.

“This is very prudent as a first step in getting us on drought defense footing, if you will, and still keeps many other options open as we go down the road,” said Doug Linney, the president of EBMUD’s board of directors. “Hope for rain but plan for the worst.”

“I hope our customers will react in the way they have in the past and support and find ways to trim their water budgets as much as they can — tighten their water belts — and we can get through this with, hopefully, a minimal amount of pain and cost,” Linney said. “And hope again for a wet year next year.”

The board unanimously approved the staff recommendation, after hearing the district’s 2021 Water Supply Availability and Deficiency Report, which says “water supply is not sufficient for meeting customer demands and storage targets after meeting flow obligations in the Lower Mokelumne River.”

Most of EBMUD’s water comes from Sierra snowmelt above the Mokelumne River.

Even last weekend’s rainfall projections were overly optimistic, with the area receiving about six-tenths of an inch, according to staff members.

The board will launch an awareness campaign aimed at cutting use — at least initially — by 10 percent. EBMUD will also start buying supplemental water from the U.S. Bureau of Reclamation’s Central Valley Project and start the process of tapping Sacramento River water through the Freeport Regional Water Project, which it has done during previous droughts, though not as early as this year.

Part of the board’s stated motivation was to save money by buying water early, a lesson learned during previous drought years.

“I think we all know we’ve been getting ready for this for months now,” said board member Marguerite Young, who talked about the district’s coming balancing act between wildlife conservation, buying more water, and deciding when more measures may be necessary.

The Freeport facility is a joint EBMUD project with the Sacramento County Water Agency. Through April 18, “Mokelumne precipitation” was at 54 percent of average, according to the report, which also said East Bay precipitation was at 33 percent of normal.

Starting May 1, EBMUD will begin informing customers about drought conditions and ways to reduce water use through available platforms. The district will also educate and inform about preparing for drought and implementing conservation measures for more efficient use indoors and outdoors.