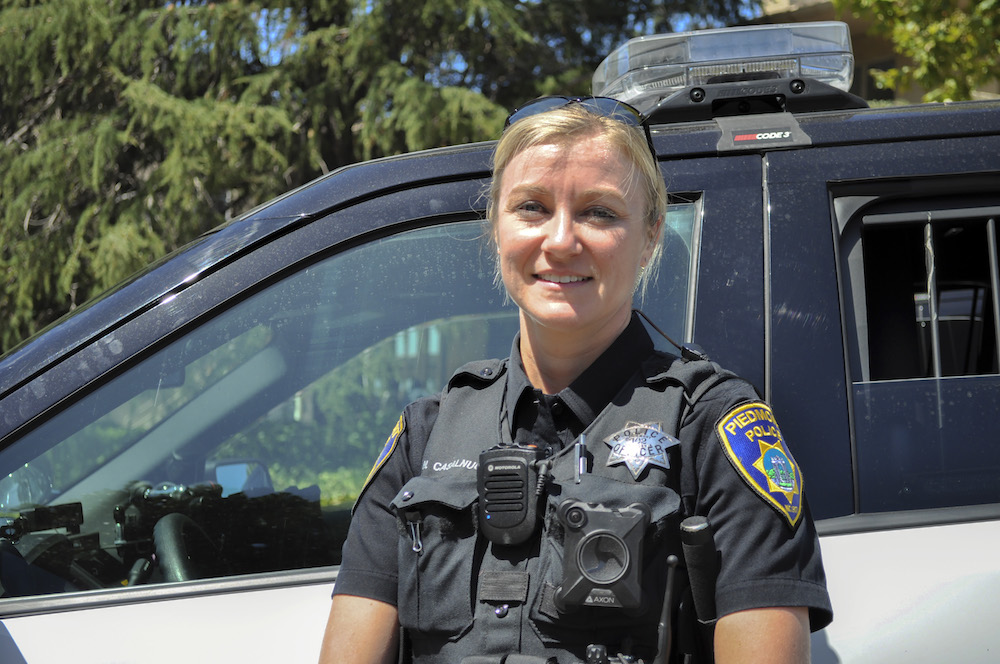 The city will apply for a second two-year state grant to continue funding for a  “juvenile officer” who works with school administrators, teachers, and counselors to help deter youth crime and tobacco use.

Monday night’s unanimous council vote comes almost two years after, in May 2019, council members had approved accepting the original grant of $391,599 from the state Department of Justice.

With that first grant, Piedmont police Officer Nicole Casalnuovo was appointed to the juvenile officer position in July 2019. That grant has paid for Casalnuovo’s position for the past 18 months.

Police Chief Jeremy Bowers told the council the deadline for submitting a competitive application with the state Department of Justice is April 14, a “tight turnaround.”

A key reason for these “tobacco grants” to local police agencies has been to fight sales and marketing of cigarettes and tobacco products, including e-cigarettes and vaping supplies, to minors. And that has been a key part of Casalnuovo’s work, Bowers said.

Casalnuovo is not a school resource officer who works on school campuses, but rather a “juvenile officer” not based on a campus, being called intermittently to the six Piedmont Unified School District campuses and the two private schools in the city. “Her presence on these campuses provided for direct communication and an opportunity for her to be an ongoing resource to the schools in the Piedmont community,” a city report said.

Bowers said Casalnuovo, in her time as juvenile officer, has made eight educational presentations to Piedmont students, three to faculty and six to community groups. She also has issued four citations to local tobacco retailers via compliance checks, and completed 29 incident reports on matters ranging from vandalism and assaults to missing persons and mental health calls.

There was significant community pushback in 2019 to the idea of an armed school resource officer based on-campus, with civic groups and individuals asserting that an armed officer would not reflect inclusivity, especially among Piedmont’s students of color. The juvenile officer position was intended to be a less intrusive presence on school campuses, though tasked with taking the lead on school-related issues.

Susy Struble of the Piedmont Racial Equity Campaign told the council Monday night that she remains concerned that a response from even a juvenile officer may sometimes be less appropriate than from a health-related responder or counselor, and that her group and the  Piedmont Anti-Racism and Diversity Committee want input as part of a transparent process for future operations.

Nonetheless, Struble also said she was excited about tentative future plans for the juvenile officer, should a second grant be approved. Among third-year plans for the juvenile officer’s operations, according to a city staff report, are staff training on best practices dealing with juveniles, and training for ongoing tobacco/vaping education programs and other mitigation efforts.

Council members said they are sensitive to the equity issue.

“We really want to advocate for programs that are fair for students of color,” Mayor Teddy Gray King said. “This is an era or reckoning both for law enforcement and for racial equity.”

Bowers acknowledged Casalnuovo has been working in that arena, too, reaching out to students who don’t necessarily trust police for “some very difficult conversations about trust.”

Councilwoman Betsy Smegal Andersen said the COVID-19 pandemic certainly won’t result in less tobacco use by students. And Bowers noted that the year-plus of distance learning from home may well result in new concerns and issues for both school officials and for police.

“I think the school district is going to need every resource it can get,” he said.