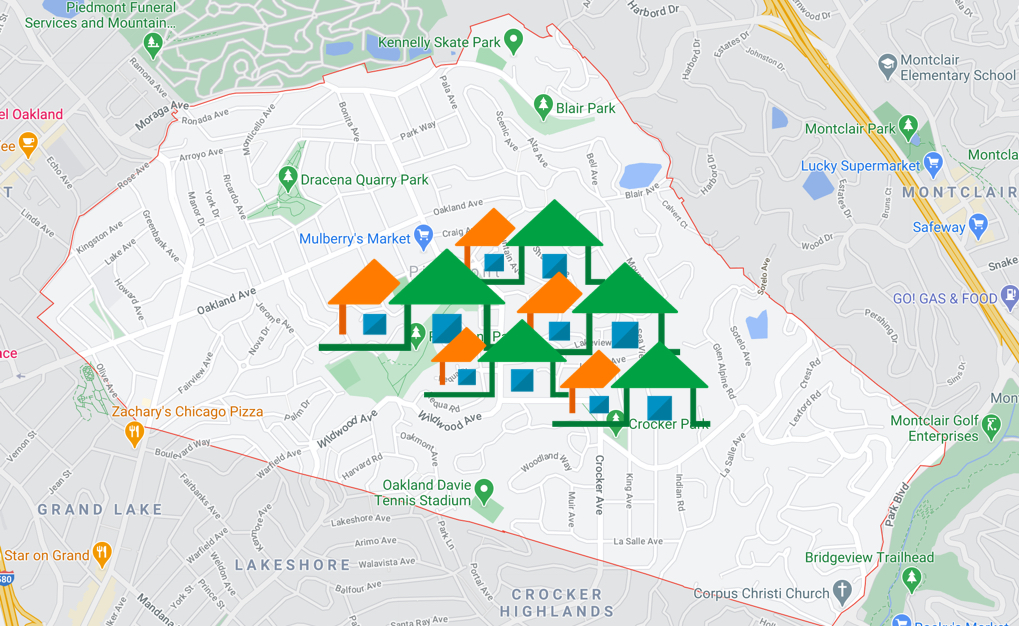 As the City of Piedmont gears up for a new decade of planning for almost 600 units of housing, the city’s planning commission heard a report Monday on progress toward fulfilling the existing (and far more modest) plan for the city to accommodate new residences.

While that report says the overall number of new housing units either built, approved or planned by the end of 2022 will exceed the 2015-2023 state housing requirements, that report also said there haven’t been enough very-low-income units approved, and that Piedmont will have an even more difficult time moving forward showing that “sufficient low- and very-low-income housing is being produced” under that same state law.

Piedmont’s success with meeting the 2015-2023 Regional Housing Needs Allocation, as administered by the Association of Bay Area Governments, has been substantial.

The annual progress report regarding the city’s Housing Element” — its plan for how the city would accommodate new housing as part of the ongoing  RHNA process — presented to the planning commissioners Monday night by city Senior Planner Pierce Macdonald-Powell, says the city has, since 2015, issued 73 building permits for new homes in the city. That number, 73, represents 13 more residential units than called for under the city’s 2015-2023 Housing Element.

The affordability issue may be thornier.

Macdonald-Powell’s report says that various new state laws since 2016 have “greatly impaired” the city’s ability to provide low or very-low-income housing units. (“Low income” is defined here as households earning between 50 and “less than 80” percent of the area median income for Alameda County). Specifically noted in her report to the Planning Commission Monday were AB 2299 and SB 1069, both becoming state law in 2016 and both resulting in Piedmont being prohibited from requiring parking for ADUs.

“With the passage of AB 2299 and SB 1069, the city’s ability to provide housing units that are rent-restricted to low or very-low income tenants was greatly impaired,” Macdonald-Powell’s report said. As a result, most of the ADUs receiving planning entitlements in Piedmont since Jan. 1, 2017 are market-rate units. The city, for 2021 and 2022, has 12 very-low-income units either approved or in the pipeline — half of the 24 called for in the 2015-2023.

Monday night, Macdonald-Powell said that while the city has done a good job creating enough housing to meet and surpass the overall RHNA requirements,

“We’re not providing enough housing to meet our very-low-income requirements.”

City planners are looking to the community for ideas on how to solve that and other issues surrounding Piedmont’s future housing needs, including those mandated by the RHNA. The city has a website, Piedmont is Home (https://tinyurl.com/aytk228f) , which has a survey and an interactive pinnable map (at piedmontishome.org). Survey responses are being taken through 11:59 p.m. Thursday, April 15.

Also, the public is encouraged to participate in the first meeting of the Piedmont Housing Advisory Committee on April 20. That committee will consider housing and equity issues in Piedmont, including the 2015-2023 RHNA plan and the succeeding 2023-2031 plan.

Even before the 2015-2023 period is over, officials have been laying the groundwork for a far more demanding 2023-2031 plan, which will require Piedmont and other Bay Area cities to accommodate a growing number of new housing units to meet the region’s anticipated need through the year 2031. Piedmont’s expected share of that 2023-2031 ABAG mandate is 587 new housing units (of the 441,176 expected to be called for regionally).