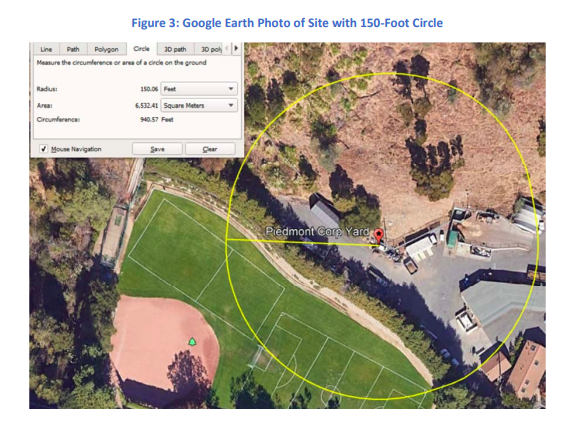 A Google Earth photo of the tower site from the March 8 city staff report.

A permit for construction of a 95-foot wireless communications tower in the City of Piedmont’s corporation yard off Moraga Avenue was unanimously approved this week by the Piedmont City Council.

The application, submitted by representatives of Louisiana-based Gulf South Towers/GST Capital Partners, LLC, would include room for up to four wireless service providers to lease space. The “monopole,” which will be built at the city’s corporation yard, will replace an existing 31-foot-high T-Mobile tower nearby, and T-Mobile will be the first company to lease space on the new pole.

On March 8, 2021, the Piedmont Planning Commission voted to recommend the City Council approve the 95-foot-tall tower.

According to a city staff report, while it is anticipated the “mid‐band” cellular coverage is  really only improved in the areas west and north of the proposed tower, the tower would enable improved “low-band” coverage throughout much of Piedmont, both in buildings and in vehicles as far east to the state Highway 13 interchange with Moraga Avenue.

Kevin Jackson, Piedmont’s planning and building department director, told the council that this project was initiated by the city to have control of both the pole location and design. The large monopole, Jackson said, is hoped to eliminate the need for more smaller wireless towers closer to homes.

Councilwoman Jen Cavenaugh and others noted that the monopole, by hosting “co-location” of multiple companies’ equipment, is what reduces the overall number of cell towers within Piedmont.

There was little argument Monday night that there are significant cell phone service problems in Moraga Canyon and along Moraga Avenue. Vice Mayor Tim Rood had his own first-person account: “Having lived for two years on Moraga Avenue and really not been able to use my phone inside my house, I can certainly understand the frustration of folks with basically unusable indoor coverage,” he said.

Matthew Duffty of GST Capital Partners said the new 95-foot pole is expected to elevate cell phone coverage quality in that area from “marginal” to “good.” He also said AT&T is expected to be the second company to lease space on the tower.

The pole and its accessories will not be dolled up with fake foliage or other cosmetic finery. “As staff, we had never seen a fake tree that looked good,” Jackson said. “And it would add much more visual bulk.”

And its location in the city corp yard and next to Coaches Field, figures to be barely visible to drivers on Moraga Avenue, several people said Monday night.

Those most likely to see it are residents of  Abbott Way and other streets north of Blair Park, and north of the corp yard. Vincent Fisher, a resident of that neighborhood, told the council he and his neighbors aren’t NIMBYs on this issue.

“It’s kind of an eyesore that will affect our views …. But we also recognize that Piedmont needs improved cell coverage,” Fisher said. “We don’t think you’re going to get much opposition from us on this matter.”