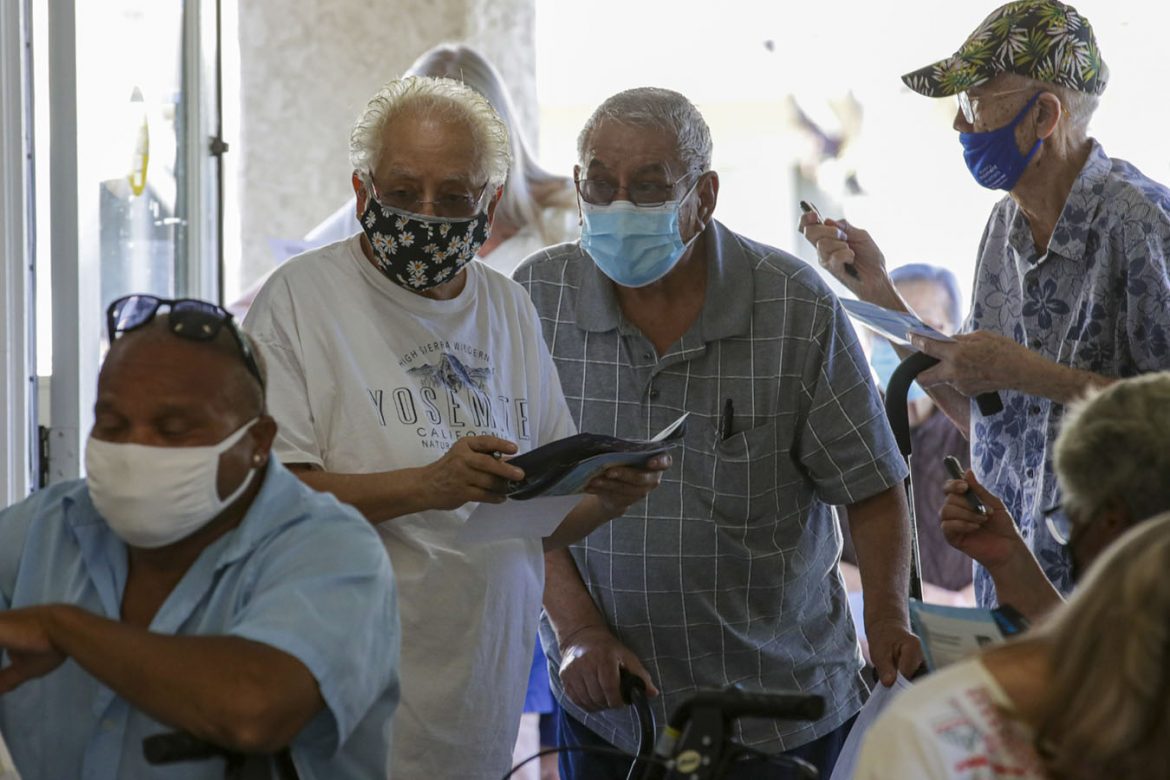 Even as California prepares to expand vaccine eligibility on April 15 to all residents age 16 and up, the state has managed to inoculate only about half its senior population — the 65-and-older target group deemed most vulnerable to death and serious illness in the pandemic.

Overall, nearly 56% of California seniors have received the full course of a covid vaccine, according to the latest data from the federal Centers for Disease Control and Prevention. That’s about average compared with other states — not nearly as high as places like South Dakota, where almost 74% of seniors are fully vaccinated, but also not as far behind as Hawaii, which has reached 44%. The data, current as of Tuesday, does not include seniors who have received only the first dose of the Pfizer-BioNTech or Moderna vaccine.

But California’s overall progress masks huge variations in senior vaccination rates among the state’s 58 counties, which largely are running their own vaccine rollouts with different eligibility rules and outreach protocols. The discrepancies notably break down by geographic region, with the state’s remote rural counties — generally conservative strongholds — in some cases struggling to give away available doses, while the more populous — and generally left-leaning — metropolitan areas often have far more demand than supply.

In San Francisco Bay Area counties like Marin and Contra Costa, for example, more than two-thirds of seniors are fully vaccinated. Meanwhile, in the far northern reaches of the state, encompassing some of California’s most dramatic and rugged terrain, rural counties like Tehama, Shasta and Del Norte have fully vaccinated only about a third of senior residents, according to the CDC data.

“We definitely share one thing in common and that is that we have a fairly high percentage of people who are vaccine hesitant. And that even spreads into the seniors,” Dr. Warren Rehwaldt, health officer for Del Norte County, said of the Northern California counties with relatively low vaccination rates. Del Norte, which is 62% white and voted solidly for Donald Trump in the 2020 election, has vaccinated 36.6% of residents age 65 and older.

The county, population 28,000, has spotty internet service, leaving the health department reliant on phone appointments for its twice-weekly clinics, which have the capacity to give out 300 doses in a day.

“I don’t think we have filled any of them completely, and they are tapering off,” Rehwaldt said. Often, 100 or more appointment slots go unused, even after the county expanded eligibility to age 50 and up. “We expected that, but we didn’t expect it this fast,” he said.

Every Thursday morning, Rehwaldt joins a local public radio broadcast to encourage people to get their shots, and the department regularly airs public service announcements. “But it’s a really high hurdle to overcome serious misgivings about the vaccine itself,” Rehwaldt said.

Asked what resources might help bolster vaccination rates, Rehwaldt said he’d opt for a mobile van to travel to remote areas of his county. But moments later, he sighed and said he wasn’t sure a van would help much after all. “What kind of resources are going to overcome hesitancy? It’s not a resource problem,” he said.

Shasta County, whose population is about 80% white and voted in even stronger numbers for Trump, is also struggling to reach the 65-plus group, with just 36.6% of seniors fully vaccinated. Public information officer Kerri Schuette acknowledged health workers were encountering some hesitancy among residents but said their efforts also were hampered by early supply issues.

On the other end of the spectrum are counties like Marin, a largely suburban and affluent stretch of communities just north of San Francisco where 71.4% of seniors are fully vaccinated.

“There’s a thread of privilege that does lead to ease of access to vaccines that needs to be acknowledged,” said county public health officer Dr. Matt Willis. Many seniors in the county have access to computers and cars, he said, and have been able to access vaccine appointments with relative ease.

Still, the county made an aggressive plan to vaccinate seniors even before the first doses arrived, he said. Rather than waiting for the federal government’s program that relied on pharmacies to vaccinate residents in long-term care facilities, for example, the health department sent in workers as soon as it had vaccines.

The county also kept its eligibility rules tightly focused on seniors age 75 and older through the middle of February, while other counties were expanding to younger age groups and a broad array of occupations. At one point, the county briefly expanded eligibility to teachers, but pulled back just one week later when doses grew scarce.

Contra Costa County, a more diverse area on the other side of San Francisco Bay, has done nearly as well: 70.9% of seniors are fully vaccinated. Add in those who have received at least one dose, and the numbers are far higher: 90% of people ages 65-74 and 97% of those 75 and older, according to the county’s vaccine tracker.

To reach vulnerable seniors, Dr. Ori Tzvieli, Contra Costa’s deputy health officer, said the county worked with nonprofit groups to make lists of residential care facilities and low-income senior housing, then sent mobile clinics to each one. “For people who were literally homebound, we send someone inside. Otherwise, we set up a station in the lobby or right outside,” he said.

The county also set up mobile clinics at farms and places of worship. It gave community health workers dedicated appointments to sign up older residents directly. And rather than have residents track down their own appointment slots online, the department had people fill out forms and then scheduled appointments for them, prioritizing those who lived in low-income ZIP codes with high rates of disease.

With a population of just over 1 million, Contra Costa now is able to vaccinate 100,000 people a week, Tzvieli said, and has recently opened eligibility to everyone over 16. But even within the county, inequalities remain. In Bay Point, for example, a largely working-class Latino community, vaccination rates are still just half of those of some wealthier communities, Tzvieli said.

Farther south, in California’s agricultural Central Valley, Fresno County falls somewhere in the middle on vaccination rates. About 54% of seniors 65-plus are fully vaccinated, just under the state average. Just more than half the county’s residents are Latino, many of them farmworkers. And about a fifth of the population lives in poverty, which presents its own hurdles to a vaccination campaign.

“Poverty immobilizes, physically and mentally,” said Joe Prado, community health division manager in Fresno County. “For a wealthier population, going 3 to 5 miles away [to a vaccine clinic] is simple; you hop in the car and go. But if you’re living in poverty, that’s a big barrier.”

There are community pockets that have not engaged with the county health system, meaning health officials are coming up against vaccine hesitancy and distrust, Prado added. “Our health literacy is nowhere near where it should be, and now there’s a digital literacy problem, too,” he said. “We’re trying to deal with all this in the middle of a pandemic.”

At this point in the campaign, Prado said, most seniors eager for the vaccine have received at least an initial dose: “The final 25% is going to be the most resource-intensive, the most difficult to reach.”

Dr. William Schaffner, an infectious-disease specialist at Vanderbilt University, calls this public health’s “low-hanging fruit phenomenon.” As the proportion of people who are vaccinated grows, he said, “we’ll have to work proportionally harder to keep advancing these numbers, because the eager beavers go first.” In rural counties from California to Tennessee, he added, supply is already outpacing demand.

So far, just more than 75% of seniors in the U.S. have received at least one dose of vaccine, according to the CDC.

“You can look at that as the glass is half-empty or half-full,” said Michael Osterholm, director of the Center for Infectious Disease Research and Policy at the University of Minnesota, during a recent episode of his weekly podcast. That still leaves more than 13 million seniors unprotected despite facing the highest risk of death; 8 in 10 deaths from covid reported in the U.S. have been among adults 65 and older.

It is crucial, Osterholm said, that states continue to direct efforts toward reaching and vaccinating vulnerable seniors who are homebound or hesitant.

“When we say we’re going to open up eligibility to everybody 16 or 18 years and older, that seems like a victory,” he said. “In many states, that is an admission of defeat.”