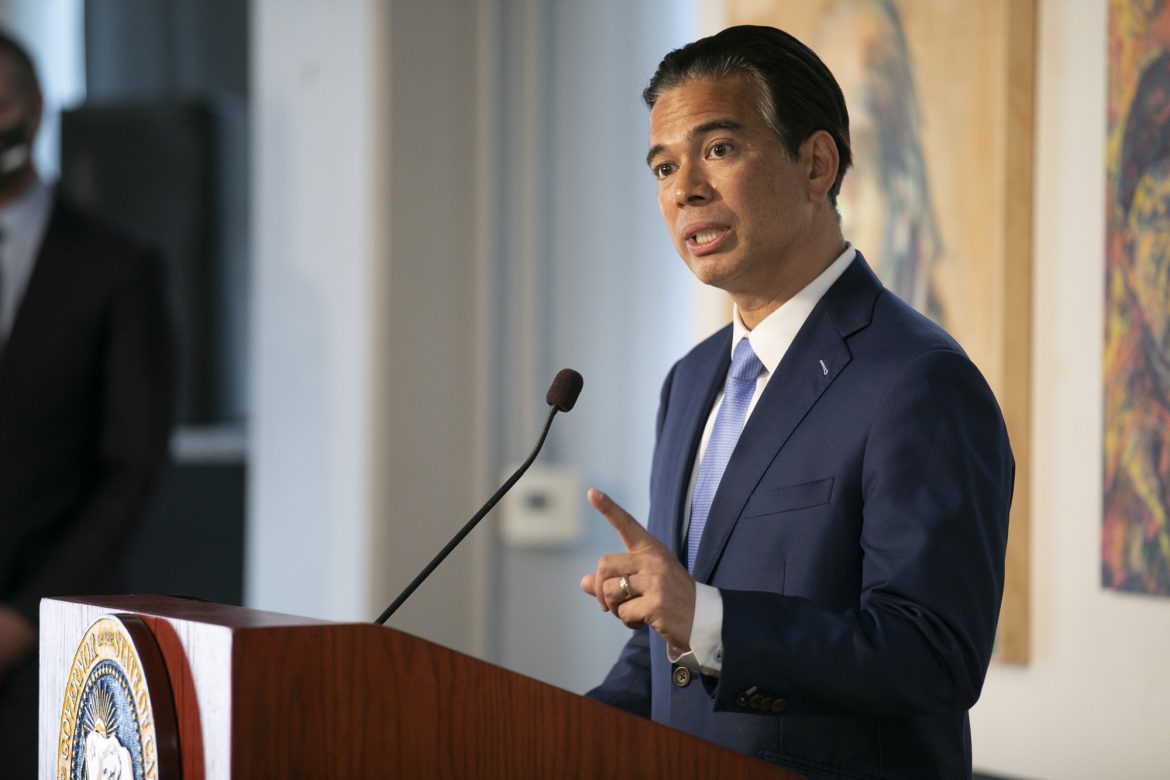 Rob Bonta, in confirmation hearings to be California's next attorney general, laid out his priorities to hold police more accountable. Photo by Anne Wernikoff, CalMatters

His comments came shortly after a Minnesota jury convicted ex-officer Derek Chauvin of second degree murder in the death of George Floyd, whose killing sparked nationwide protests and calls for criminal justice reform.

“We need to rebuild trust between law enforcement and communities. And I believe that law enforcement are invaluable parts of our communities and that the vast majority want to build and earn that trust. Accountability is part of that trust,” Bonta, a Democrat from Alameda, testified before the Senate Rules Committee.

The Legislature on Thursday voted its final confirmation of Bonta, who has represented his East Bay in the Assembly since 2012. He had been nominated by Gov. Gavin Newsom.

Still, despite the broad support in the Legislature and his vows for stronger reforms, Bonta can expect to continue to face close and continuing scrutiny from progressives, who’ve accused the state Justice Department in recent years of failing to hold police more accountable.

Assemblymember Reginald Jones-Sawyer, a South Los Angeles Democrat, told Bonta that the next attorney general must meet the demands of the moment. The verdict in the Floyd case, he said, “underscores what communities of color have long requested — accountability for bad officers.”

While the Legislature has enacted important law enforcement reforms over the past several years, Jones-Sawyer said, the department must “serve as a backstop and final arbiter in cases of abuse or misconduct by law enforcement. Too many Californians die or have their lives forever altered by the actions of bad law enforcement officials.”

Bonta’s nomination last month came after Xavier Becerra stepped down to become U.S. Secretary of Health and Human Services. Becerra, who earned praise for confronting the Trump Administration on immigration and other key issues, frustrated progressives when it came to police reform in the wake of controversial deaths at the hands of police officers throughout the country, including California.

Under Becerra, who received substantial campaign donations from law enforcement unions, the AG’s office was hesitant to prosecute police officers involved in controversial shootings of unarmed civilians, dragged its feet on investigations of alleged civil rights abuses by some law enforcement agencies, and fought the release of police misconduct records despite a state law that opened certain disciplinary files to the public.

State Sen. Sydney Kamlager, a Los Angeles Democrat, asked about that lack of disclosure under a law that opened records pertaining to police use of deadly force and certain misconduct findings.

Bonta pledged that his office would be more transparent.

“I supported that bill as a legislator, and I know its letter and I know its intent,” he said. “And it is designed specifically to provide for increased disclosure and more transparency, and which will hopefully lead to greater oversight and accountability.”

During his two hearings, Bonta touted his progressive record as a five-term Bay Area lawmaker.

Among other law enforcement measures, he co-authored legislation approved last year requiring state prosecutors to investigate officer-involved shootings that result in the death of an unarmed person. Forming a division to handle an estimated 40 shooting investigations a year, he said, would be one of his most important initial priorities.

Becerra had resisted calls to become actively engaged in investigating force-related deaths in California’s police agencies, a job he insisted should remain mostly with local authorities.

“The attorney general’s office has not in the past generally investigated large numbers of officer involved shootings,” Bonta said. “Those who are grieving the loss of life of family members who died during interactions with law enforcement, anyone who’s being investigated, the Legislature in California, all deserve that we get it right, that it be thorough and accurate and comprehensive and reliable and full of integrity, so that when an investigation is complete, the results are trusted.”

Bonta also is co-author of pending Senate Bill 2, which would allow the state to decertify officers— effectively kicking them out of law enforcement—for misconduct. California is one of a handful of states without such power, allowing some officers even convicted of crimes to move from department to department.

“California talks often about how we lead, we’re first, we’re bold. Not when it comes to decertification,” Bonta told the Assembly committee. “This is not — should not be — a controversial concept that we’re talking about.”

Progressive groups congratulated Bonta after the announcement of his nomination and called on him to continue helping to change the justice system. And numerous organizations, including the Western Center on Law and Poverty and the Anti-Recidivism Coalition, called in to the virtual confirmation hearings to support the nomination.

Bonta will need to start running immediately if he wants to keep the job in the 2022 election in a state with a history of conservative, voter-supported criminal justice policies like the three-strikes law. Law enforcement groups gave nearly $5 million in donations to California political candidates from 2015 through 2018, and nearly $7 million in independent expenditures including about $230,000 to re-elect Becerra, according to a CalMatters analysis.

The Peace Officers Research Association of California, the state’s largest law enforcement association, initially congratulated Bonta on his nomination, and its president said in a statement that the organization looks “forward to working with him to address the many important challenges and opportunities facing California’s law enforcement community today.”

Before voting to approve Bonta’s nomination, Assemblymember Tom Lackey, a Palmdale Republican, said it’s hurtful and unfair to broad-brush all of law enforcement because of the conduct of a few bad officers.

“I’m hoping you’ll be able to partner with law enforcement” on solutions, Lackey told Bonta during the Assembly hearing.

Bonta fielded questions about a range of topics including illegal marijuana grows, gun rights and hospital mergers. But his message throughout was the same: