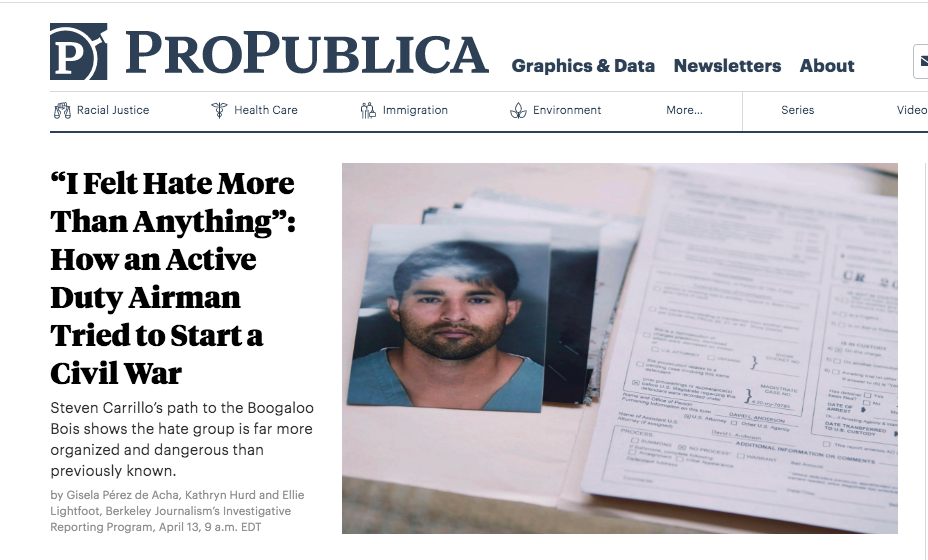 Congratulations to Piedmont Exedra editor and advisor David Thigpen for his role in this important reporting project. “The story began last May as an investigation by three Berkeley grad students into the mysterious shooting of a security office outside the federal building in Oakland,” said Thigpen. “They wound up uncovering a nationwide network of violent domestic extremists. I guided the reporting with another professor but the success of the investigation is due to the relentlessness of these three reporters.”

The following information is from the UC Berkeley Graduate School of Journalism:

Berkeley Journalism’s Investigative Reporting Program (IRP) is collaborating with the PBS series FRONTLINE and ProPublica on “American Insurrection,” a documentary about the threat posed by militia groups, white supremacists and other extremist groups, scheduled for release on April 13.

The 90-minute documentary features in-depth reporting by alumna Gisela Pérez de Acha (’20) and two students at Berkeley Journalism, Kathryn Hurd (’21) and Ellie Lightfoot (’21). They worked under the editorial leadership and supervision of Professor David Barstow, head of the IRP, an award-winning nonprofit newsroom at Berkeley Journalism, where he serves as the Reva and David Logan Distinguished Chair in Investigative Journalism. Hurd and Lightfoot began looking into the “Boogaloo Bois” last summer while working as research assistants at the IRP. Pérez de Acha, a recent graduate who is working as a reporter at the IRP, joined the project soon after to share her expertise using open source intelligence techniques (OSINT). Through months of deep reporting, the team gained access to a prominent Boogaloo leader and uncovered a trove of Boogaloo documents. Lecturer David Thigpen, who taught a class at Berkeley Journalism on covering extremism last fall, provided key editorial guidance.

Hurd, Lightfoot and Pérez de Acha were interviewed on-camera for the documentary. Their 4,000-word investigative story, “How an Active Duty Airman Tried to Start a Civil War,” was published on the FRONTLINE and ProPublica websites on April 13. “Ellie, Kathryn and Gisela made important breakthroughs on a difficult subject through rigorous and relentless investigative reporting,’’ Professor Barstow said. “I could not be prouder of this formidable reporting team and the vital work they are now contributing to FRONTLINE and ProPublica, two of the best investigative news organizations on Planet Earth.”

“We’ve been reporting on this story for almost a year and uncovered so much information,” Hurd said. “It became a lot bigger than any of us originally thought.”

Speaking about her involvement, Pérez de Acha said, “I got to take the open-source investigation skills I learned at UC Berkeley’s Human Rights Center Lab and apply them to an important story about the Boogaloo Bois. None of it would have happened without the high-precision digital forensics to uncover new evidence; the cybersecurity training I got on campus to minimize reporting risks, and the brilliance of David Barstow’s story sense. I’m grateful to have worked with such a talented team.”

This investigative story by Gisela Pérez de Acha, Kathryn Hurd and Ellie Lightfoot was published by ProPublica on April 13.

“I am thrilled to see our students doing the most difficult, most ambitious reporting on extremism, which is one of the most important issues of our time,” said Dean Geeta Anand. “I am so excited that FRONTLINE and ProPublica recognized the value of our students’ reporting and wanted to include them and their incredible work in the documentary. I could not be more proud of our students and more excited about our ongoing partnership with FRONTLINE.”

“We are so pleased to partner with UC Berkeley on “American Insurrection” and are grateful to have the investigative muscle of both Berkeley Journalism’s Investigative Reporting Program and ProPublica to bolster this critical reporting on the rise of extremism,” says FRONTLINE’s Executive Producer, Raney Aronson-Rath.