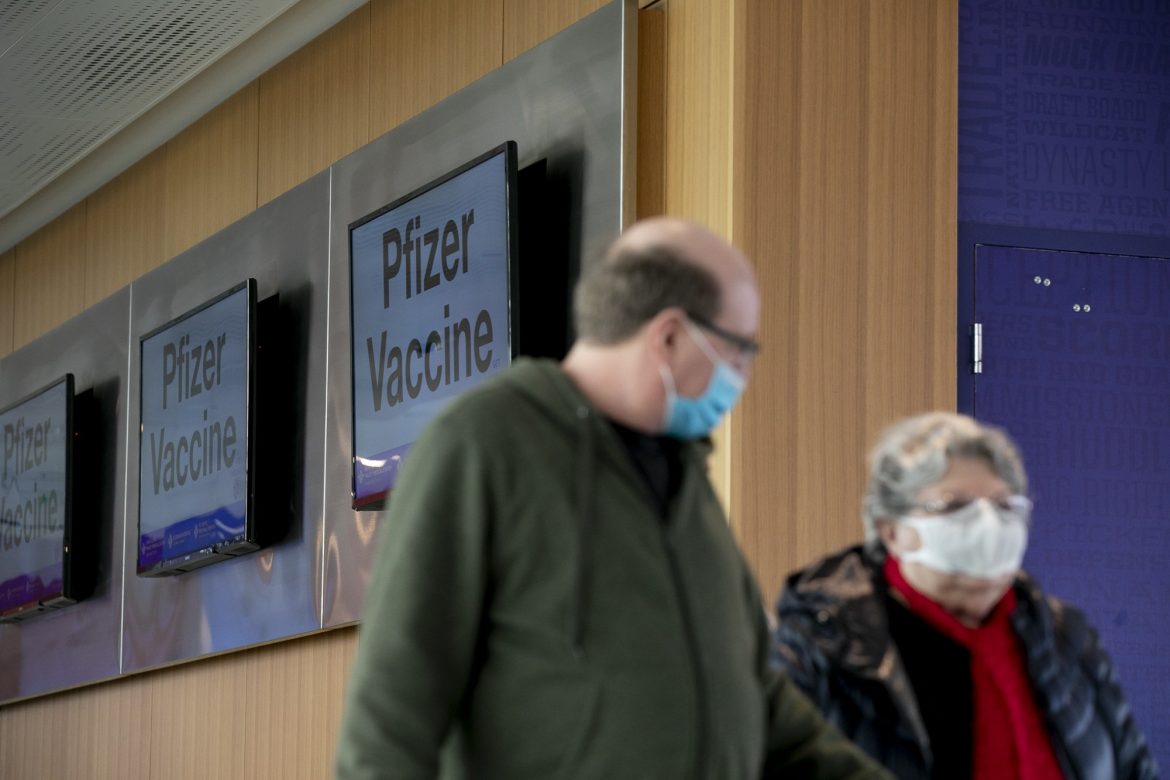 Palo Alto resident Margaret Park, 91, is accompanied by her son to the waiting area after receiving her first dose of the Pfizer COVID-19 vaccine at Levi’s Stadium on Feb. 9, 2021. The 49ers arena opened on Tuesday as a vaccine distribution site for Santa Clara County residents 65 and older and is expected to inoculate up to 15,000 people per day once supplies become available. Photo by Anne Wernikoff, CalMatters

Californians frustrated by the never-ending hunt for COVID-19 vaccine appointments may have to wait several weeks until appointments are more readily available, Blue Shield’s CEO said in an interview with CalMatters today.

Blue Shield, the insurer tasked to oversee the state’s vaccine distribution, is aware of Californians’ frustrations and health care providers’ complaints, and is working to quickly expand distribution so that everyone who wants a dose can get one, CEO Paul Markovich said.

“Immediately on the first day, there probably won’t be availability for everybody, just because…when you make millions of people eligible overnight, there’s not millions of appointments immediately available at that moment,” Markovich said. “But I would say by the time we get to the end of April, or potentially early May, I don’t think that’s going to be an issue.”

Blue Shield says California now has the capacity to administer 4 million vaccines a week. But to meet that capacity, manufacturers have to deliver the vaccine supply they have promised, Markovich said.

The scope of California’s vaccination push is massive. To date, 16.4 million vaccine doses have been administered, more than the amounts that some entire countries — Russia and Germany — have administered. About 18% of Californians are fully vaccinated, but far more are needed to achieve the herd immunity that will ease pandemic restrictions.

California is expected to receive 2.5 million vaccines per week in early April and close to 3 million by the second half of the month. That’s a substantial increase from the approximate 1.8 million vaccines a week the state is currently receiving. The boost allows California to expand eligibility to residents who are 50 and older starting Thursday, and then to everyone 16 and older beginning on April 15.

At the same time, two mass vaccination sites in Oakland and Los Angeles run by federal and state agencies are expected to close April 11, California officials announced today. The federal-state pilot project ends then, although the local health agencies may take over the sites.

California’s no-bid, abruptly-announced contract with Blue Shield to oversee vaccine distribution has been controversial. Some counties refused to sign a contract with the insurer, fearing giving authority to a private company. Counties now are allowed to sign modified agreements with the state to join Blue Shield’s network.

In a troubleshooting meeting today for vaccinators, some doctors complained that they had tried to sign up with Blue Shield yet couldn’t get doses for their patients.

But that’s by design, Markovich said. Blue Shield first will bring on board the clinics and doctors who can reach the most people, he said.

“We’re certainly going to get back to everybody who’s interested,” Markovich said. “But some of that delay has been intentional. We didn’t see a lot of point in making them go through the work if they were going to then have to potentially wait three or four or more weeks” for doses.

As of Thursday, only 20 of the 61 county and city health departments had signed onto the new network. Only Kern and Orange counties signed up directly with Blue Shield. Blue Shield’s network so far includes 270 providers with 2,100 sites, including hospitals, pharmacies and community clinics.

Markovich said he expects all counties and more providers to make the switch in the coming days — if not by March 31, the original goal, then soon after that.

Doctors and other providers must sign onto the Blue Shield network to continue getting doses.

For months, the state has been dogged by concerns over equity as Latino and Black Californians hardest hit by the pandemic are being vaccinated at lower rates than white people.

Vaccinating all Californians 75 and older would have prevented the deaths of two-thirds of white people compared to 42% of Black people’s deaths and 35% of Latinos’ deaths, according to the study.

“An age-based approach in California benefits the state’s older white populations at the expense of younger BIPOC (Black, Indigenous and people of color) populations with a higher risk of death from COVID-19,” wrote the researchers from the University of California, San Francisco, University of Minnesota and other institutions.

The study suggests that California’s more recent move to put more focus on disadvantaged neighborhoods will improve this inequity.

California this month began earmarking 40% of its vaccine doses for the state’s lowest income and most diverse communities.