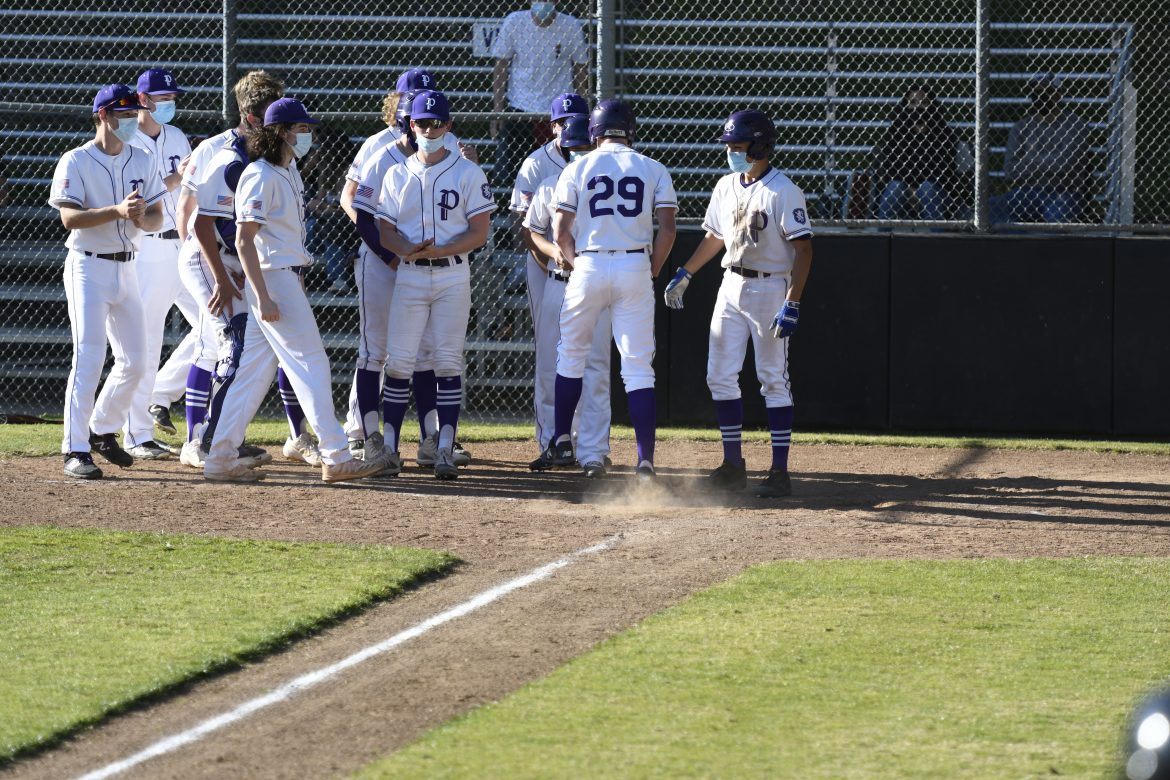 Piedmont made a remarkable comeback in the first game. Down 1-0 going into the bottom of the third, Hayward scored 12 runs in a forgettable inning for the Highlanders. After pitching two spotless innings in his varsity debut, junior Alex Tafapolsky walked the first two batters in the third. Several hits, errors, and more walks later, the Farmers had a big lead. Tafapolsky surrendered 8 runs, but only 3 were earned. Senior Julian Scherman came on in relief of sophomore Ryan McConathy to end the damage.

After the big innings, coach Eric Olson urged calm and resilience. He implored the Highlanders to chip away in the remaining four innings, and that’s exactly what they did. With two in the 4th, one in the 5th, and 3 in the 6th, Piedmont had pulled to within five runs at 12-7. Scherman meanwhile held Hayward scoreless through the 5th, and junior Evan McConathy worked around two walks to complete the 6th.

The epic 7th inning began with a double by junior Davis Alazraqui. With one out, Evan McConathy singled for one run. Junior Will Sprague singled and junior Michael Aikawa walked to load the bases. After the second out, junior Nico DeFazio singled to right to score two more and bring Piedmont within two runs. Senior Lars Derr singled for an RBI to close the Hayward lead to 12-11. Senior Cal Barna was hit by a pitch to load the bases and bring up Alazraqui for the second time in the inning. With clouds and cold descending, the catcher delivered a hard ground single up the middle to score two and give Piedmont the lead.

Coach Olson said he had never seen a comeback from such a large deficit before. “I told the players after that big inning to stick with it and be positive. I can’t say I expected us to win the game like that, but I wasn’t surprised. This team already seems special after just four games.”

Game 2 at Witter lacked the drama of game 1, but featured some fine performances nonetheless. Riley got the start after his save in game 1, and pitched well for four innings. He gave up five hits and three runs, striking out three.

Down 2-0 going into the bottom of the 3rd, Piedmont’s bats came alive. They scored five times in the inning, with the big blows coming from Aikawa, who tripled to deep left center, Derr, who doubled to the wall in right, and Barna, who hit a high pitch almost to the wall in left center.

After Hayward closed the lead to 5-3 in the 4th, the Highlanders broke the game open in their half. Ryan McConathy delivered a moon shot over the fence in left for a two-run home run, Piedmont’s first of the 2021 season.

Next up for the Highlanders are a rematch against Mt. Eden on March 22, an away game against Berkeley on March 23, and a home game against St. Josephs-Notre Dame on April 3.