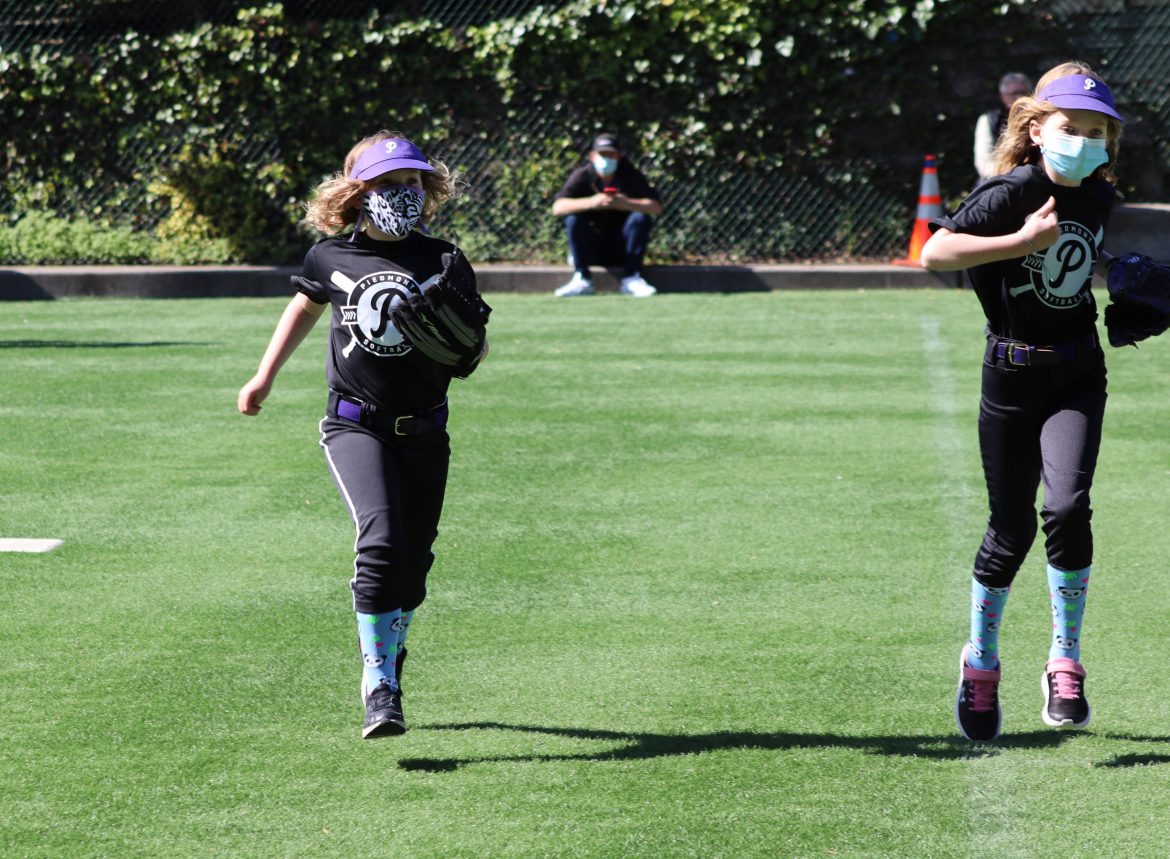 Piedmont Softball teams came out swinging this past weekend, playing their first games of the 2021 Spring Season.  There are 5 softball teams made up of 6U, 8U and 10U players, playing a single game for each division each weekend.   Killer Pandas head coach, Anne Hawkins, could not have been prouder of all the players, commenting, “It’s been a long time coming, and with the loss of last season we have many relatively new players.  I am so impressed by their enthusiasm and willingness to try new things, and grateful to all the parents who have come out to coach and ensure that we’ve been able to return to play safely while still having a ton of fun.”

In our 8u Softball season opener, the Night Wolves took on the Killer Pandas.  Between the two teams, six rookie pitchers took the mound throwing strikes from the full wind-up, including Sophie Shartsis, Bailey Gregovich, and Evelyn MacMichael for the Night Wolves, and Mackenzie Ewen, Sarina Hill, and Alice Sorensen for the Killer Pandas.  The Night Wolves came out swinging, setting the tone for the season with a single by Abby Gregovich off the first pitch of the game, and a second-inning triple to center by Eisa DeAvila.

The Bulldogs snagged a late lead and defeated the Raptors 5-1 in seven innings on Sunday. Behind strong starting pitching for both teams, the game was tied at one going into the top of the fifth. Nicholas King started for the Raptors, going three innings and allowing 0 runs on one hit, striking out 9 and walking one.  Daniel Wieland got the start for the Bulldogs, allowing two hits and one run over four innings. The Bulldogs scored 4 in the top of the fifth to break the game open, with Cash Panico pitching three scoreless innings to close out the game.

Dylan Toyama got the win in the Ghosts’ 17-5 victory over the Cannon Ballers. The Ghosts defense shut down the Cannon Ballers, holding them scoreless in 3 of 5 innings. The Ghosts turned two double plays – and unusually, catcher Aidan Shartsis was in on one of them with a throw to Will Harris covering 2nd off a blooper hit. Cannon Baller catcher Ryan McMurtry caught two Ghosts stealing 3rd. The Cannon Ballers hit well, with Stein Mason and Ben McMurtry both going deep, but with few base runners couldn’t outscore the Ghosts. Mark Hopkins drove in 3 off an infield hit for the Ghosts, and Gael Fierro, Dylan Toyama and Dylan Jerez hit back-to-back-to-back home runs in the 5th.

The Nationals and Astros battled to an 11-11 tie on Sunday.   Astros’ Koh Sano, Finnegan Blomquist and Cole Morris all caught pop ups, and Wes Rampton supplied great hitting. For the Nationals, Jonah Emanuelson, Philip Haan, Logan Piotrowski, and Quinn Fletcher all made great plays on grounders, while Oliver Le reached base every time and Isaac Shin legged out a triple to the fence.

The Dodgers hosted the A’s at Beach Field in an exciting and close game. Dodgers’ Evan Hetherington and James Kappes combined for multiple efficient defensive plays, and the team rallied early on offense. The A’s had a big rally in the 3rd inning, scoring the maximum 5 runs. Nate Stein had two RBI doubles, Adrian Schwartz racked up 3 hits and fielded several tough grounders, and Westlee Saperstein recovered from an injury scare at PA by making two consecutive perfect throws to Jack Dorsey at first for outs.