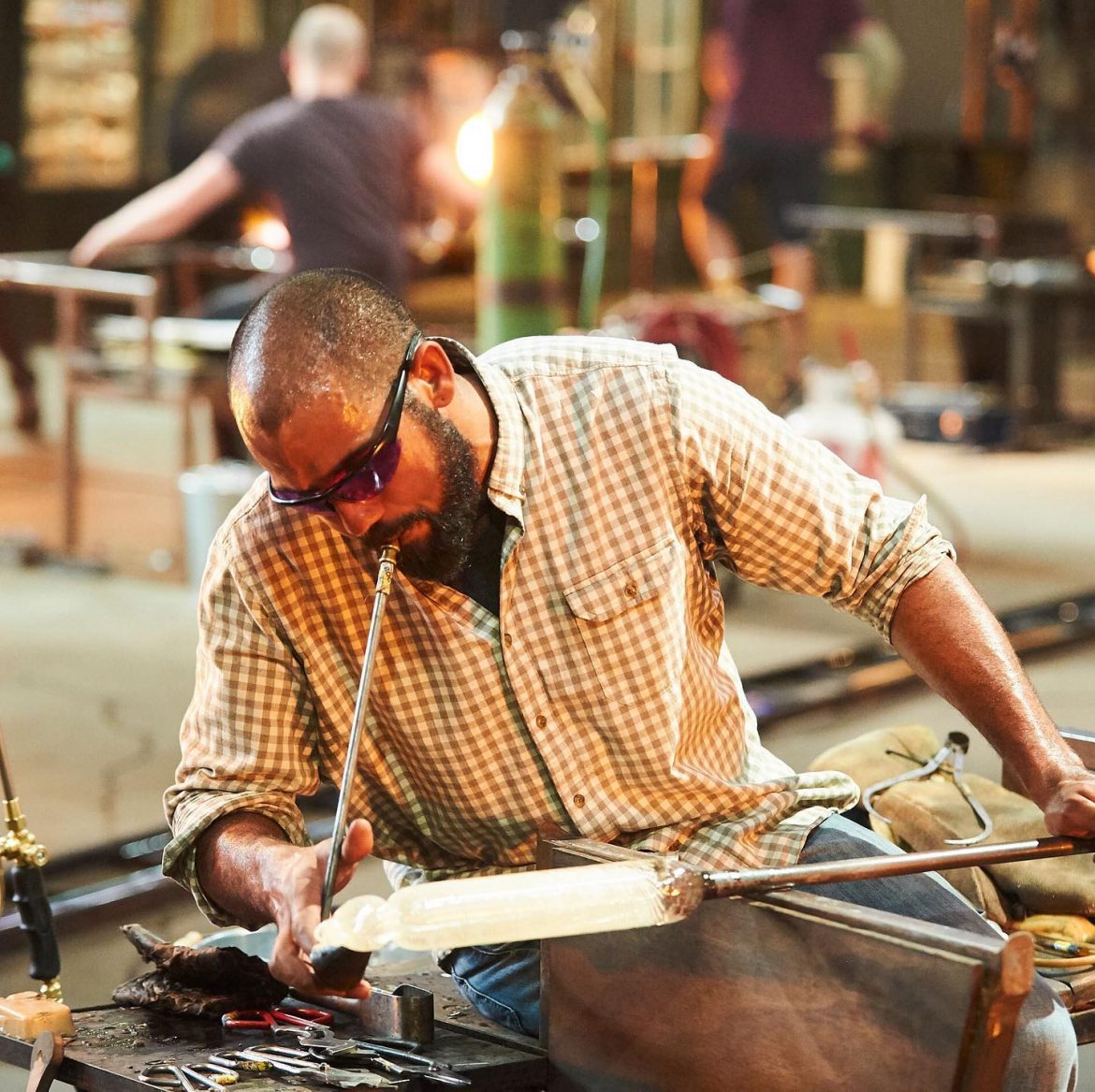 It’s unusual to ask an artist about their journey and have them talk about other peoples’ work almost as much as they do about their own. But that’s what happens when you talk to Oakland glass artist and Netflix reality show veteran Jason McDonald.

First, there’s Hilltop Artists – the group that launched an after-school glassblowing academy at his middle school in Tacoma, Washington, in the 1990s, giving McDonald and kids from the troubled Hilltop neighborhood a safe place to learn, and sparking his lifelong pursuit of glass.

There’s Katie Johnson, a classmate at California College of the Arts, who shot and edited the audition video that he sent to Netflix, ultimately landing a spot on their 2020 glassblowing reality series, “Blown Away.”

And there’s his mentor Nate Watson, CCA faculty and executive director at Public Glass in San Francisco – a fellow glassblower who opened the studio to CCA students after the school closed their facilities during the pandemic.

“I love that community,” McDonald says about the artists who work out of Public Glass. “I find so much support from them, both creatively and personally.”

McDonald emphasizes contributions from his ample and generous community, weaving in and out of his own journey from craftsperson to artist. McDonald has worked in the glass and craft industry for the better part of last decade, but his interest in making art — work that has a voice — is relatively new, he says.

Early on in his studies, he was pushing to improve his skills and be the best glassblower he could be. His professors were frustrated by his approach, because they recognized that his work could say more, McDonald says.

“I realized I can make well-made objects, but if I add my story to my work, then my work becomes more interesting,” he says. “Not just to the world, but the work also matters more to me.”

What matters is looking at the inequities between Blacks and whites, and critiquing centuries-old disparities through his art.

“I live in a culture that doesn’t value brown skin,” McDonald says. “When you have elected officials that are openly racist, there are issues you need to talk about openly. I choose to talk about my experience as a Black man in a racist nation. It has been really powerful to be unapologetically Black.”

McDonald describes himself as a vessel maker, and he uses these shapes to study identity, racism and representation. For one of the challenges on “Blown Away,” he created a container resembling a calabash gourd, a shape he uses as an analog for the African form.

He personalized the piece with white stripes of cane glass, conveying his mixed race – his mother is white, and his father is Black. The artwork was a success, and advanced him to the next stage of the competition.

McDonald made it to the third of 11 challenges on Season 2 of “Blown Away.” It was a fun experience, he says, and has led to more interest in his work.

McDonald has created other vessels using a Swedish overlay technique, a complex process that uses multiple layers of glass. For “Black Figure #1,” he dipped colored glass in black glass and engraved the vessel once it had cooled. The technique gives the vessel a warm but haunting lantern effect.

McDonald also uses blown glass vessels to tell the story of people of color in the glass community, in academia and in the museum world. His series of goblets titled “Besieged,” suggests a lonely, marginalized story.

In 2020, McDonald’s mentor Nate Watson, with Weston Teruya and Michele Carlson, published a report in New Glass Review titled “The Whiteness of Glass” that reported under 1 percent of tenured faculty in U.S. academic glass programs are Black. Glass and craft museum boards are even less diverse — there is no Black representation on these boards, according to the report.

The absence of diversity in the arts means that artists of color have fewer opportunities to connect with mentors who understand their point of view, the report says. Worse, their presence is questioned. McDonald says he’s even been asked to leave studios before he’s had a chance to explain that he’s a glassblower. Why? People aren’t used to seeing artists of color in the hot shop.

“As another African American in this field, it was such a moment for me to see him walk through the door,” Watson says of the first time he met McDonald at Public Glass.

The same connection that Watson made with McDonald will have a ripple effect, if it hasn’t already.

Shows like “Blown Away” are conduits that raise awareness about glassblowing, and when people see McDonald, they may see themselves in his work, Watson says. That visibility can help bring more people of color into the arts. Outreach in schools is also critical, as is hiring at the university level. More diversity in universities can help propel people into careers, Watson says.

McDonald will earn his Bachelor of Fine Arts degree at CCA in May 2021. His next step will be graduate school at Tyler School of Art and Architecture at Temple University in Philadelphia. He hopes his experience in graduate school will further prepare him for life as an artist and educator. He wants to teach after graduate school — when he stands in front of his classes, he will be a representative of his race and dedication to the craft, he says.

No doubt the community he has fostered and participated in will be there.

“We help each other and support each other,” Watson says.

* The “Blown Away” reality series is currently available on Netflix.