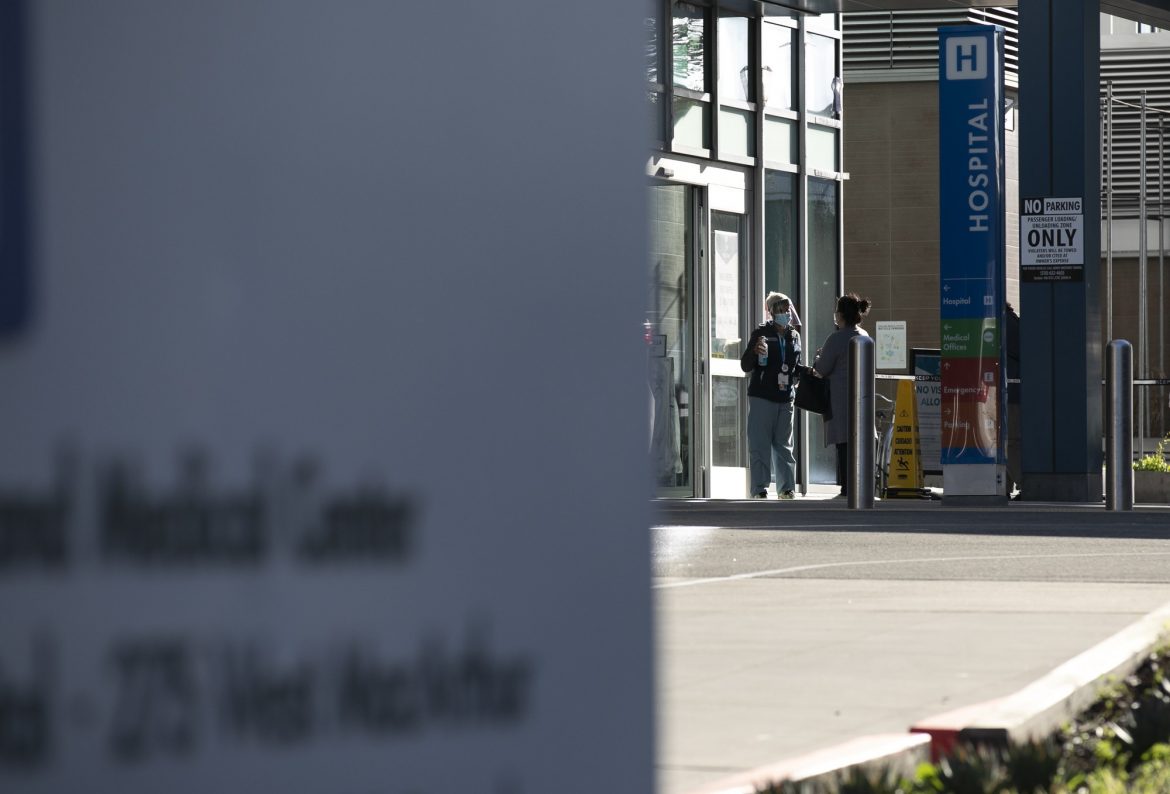 One patient recovering from COVID-19 finally started eating after a family member was allowed to bring home-cooked meals to a hospital in Fresno. Another patient’s racing heart calmed at a hospital in Monterey when a relative was allowed inside.

After a year of strict rules that forced many people to abandon their family members at a hospital entrance, many California hospitals are now beginning to crack open their doors to regular visits for non-COVID-19 patients.

Most counties moved this month to less restrictive tiers and the state last week issued new, looser guidelines for hospitals. Now hospitals in 50 counties — home to more than 93% of the population — are eligible to open up to two visitors per patient, with some caveats.

Some hospitals changed their visitor policies immediately and with enthusiasm.

“I’m so happy and so excited, like a little kid in a candy store,” said Adolphe Edward, chief executive officer of El Centro Regional Medical Center in Imperial County. “Returning some of those visits back is going to be very helpful for our mental health.”

Some hospitals, however, are cautiously weighing whether to allow more people inside. Dignity Health, Kaiser Permanente and SutterHealth hospital systems, for example, said that they will continue to reevaluate their visitor policies and could update them soon.

Until two weeks ago, most of California remained in the strictest purple tier, where state health officials advised hospitals to limit visitors to only special cases, such as children and women giving birth. Now only eight counties, with less than 7% of the state’s population, remain in the purple tier.

In addition, the new state guidance increases the number of visitors recommended in non-purple counties to two at a time per patient, provided they’re from the same household and “social distancing can be accomplished.” For all tiers, the number of visitors recommended for children, women giving birth and patients who are dying, undergoing surgery, or have disabilities increased to two.

The guidance doesn’t have the force of law, but a spokesperson for the California Department of Public Health said “hospitals are licensed by CDPH and should comply.” Counties may implement stricter standards if the local public health officer orders them.

Imperial County left the most restrictive purple tier in early March. So starting this week, El Centro Regional Medical Center hospital now allows some visitors for patients in the medical-surgical and intensive care units, except for patients in isolation for COVID-19 or other diseases. One visitor per patient is allowed in the emergency room, and the hospital will now permit two parents to visit hospitalized children, one at a time.

Previously, the hospital largely barred visitors except for children, people giving birth, or people with disabilities that make it difficult for them to communicate or stand without assistance. Visitors were also allowed for patients who were dying as long as the patient was not in isolation.

The hospital was obligated to follow the state’s guidance, Edward said, but the restrictions were difficult to implement. “You’re hearing them cry, and you’re hearing the pain of the loss that’s about to happen,” he said.

Now Edward is thrilled to be allowing more people to be with their loved ones. “It’s about the families coming back to the hospital,” he said. “The policies (are) finally following the human needs.”

While the guidance doesn’t explicitly mention emergency rooms, a state health department spokesperson said it “applies to visitation for various levels of patient care, including those in emergency room care.”

Charis Hill, a 34-year-old disabled activist whose immune system is weakened by treatment for an inflammatory disease, came down with a 102-degree fever in August. A friend rushed Hill to the emergency room at Mercy General Hospital in Sacramento, but they were separated at triage.

Hill spent hours alone in limbo — sweating, shivering and waiting for care. Unable to sit up, a security guard threatened to call the police on Hill for lying down across the chairs in the waiting room, Hill said.

“I felt helpless. I was alone,” Hill said. “I needed someone to advocate for me, to explain my disease that I live with.”

Hill’s friend, who asked not to be named because she works for the state, sat for hours in her car, wearing a respirator because she didn’t know whether Hill was infected with the coronavirus.

“You’re just wondering what the hell is happening. You know, you’re just kind of stuck in the lurch just thinking is it good, with no information? Is it bad? Like what’s going on?” she said.

When she heard about the security guard’s threats to call the police, she raced into the emergency room to join Hill. “I was going in, come hell or high water,” she said. “COVID be damned. I was going in.”

William Hodges, a spokesperson for Dignity Health’s hospitals, which include Mercy General, couldn’t comment specifically on Hill’s experience. “We have no record of a complaint or incident report filed by this patient, and therefore, do not have necessary details to determine what may have transpired during the visit,” he said.

He said the health system is constantly re-evaluating its visitor policies, which at the time allowed one support person in the emergency department.

“As conditions continue to improve, we hope to ease these restrictions soon,” Hodges said.

Doctors across the state are seeing the benefits of letting family members into hospital rooms and emergency departments.

“When I truly see the need of the patient’s family at bedside, I advocate for that,” said Dr. Jorge Martinez-Cuellar, an internist and medical director of hospital medicine at Saint Agnes Medical Center in Fresno.

Counties such as Fresno that remain in the purple tier must still largely restrict hospital visitors to the few exceptions defined by the state.

But Martinez-Cuellar tries to make exceptions when the benefits outweigh the risks.

One coronavirus patient with severe lung disease had been in the hospital for several weeks and was experiencing a language barrier and anxiety. The patient had been refusing to eat, and wasn’t improving enough to be discharged.

“At some point we said, ‘You know what, we’re not going to lose anything, let’s let the family bring their own food,’” Martinez-Cuellar said. “And what a difference, believe me.”

The patient began improving enough to eventually be sent home.

Martinez-Cuellar is hopeful that with increased vaccination, the hospital will soon be allowed to let more families visit their loved ones’ bedsides.

“As long as we vaccinate people massively, we’ll get soon to that level of normality that we need to facilitate the family members of bedside,” he said. “Because definitely that makes a huge difference in patient care.”

Close was treating a Korean-speaking patient through an interpretation service and saw his vital signs improve instantly when a relative arrived who supported the patient and helped interpret the conversation.

“He would start becoming visibly more anxious talking about something, or trying to understand, the heart rate would go up,” Close said. “And as he was more calm and more comfortable and feeling more supported, the heart rate definitely came down. It was quite impressive.”

The hospital plans to update its policies to reflect the state’s new guidance, a spokesperson said.

But Close doesn’t expect to see visitors flooding through their doors.

“People are still really scared,” she said. “They’ve been out for so long. I think many people have started to view the emergency department or healthcare in general as this scary place. And so trying to allay those fears, while caring for their family member, is very, very challenging.”

Hospitals in counties with high-infection rates worry that in places with widespread infections, people may unknowingly walk into the hospital and bring the coronavirus with them — or contract the virus there and walk back out with it.

“I’m super torn and have very strong feelings on both sides — to increase the number of visitors to help with the patients, and then to not let anyone in ever because I just don’t want this to spread again,” said one emergency medicine doctor in a purple-tier county who asked not to be named because their hospital has not cleared them to speak with the press. “I don’t know what the right answer is.”

Rais Vohra, an emergency medicine physician and interim health officer in hard-hit Fresno County, agreed, but said it is tougher to quickly piece together the medical history of patients who can’t speak for themselves.

“Having a relative speak on behalf of the patient was something that I really didn’t appreciate was so important to the work of emergency medicine, until that was taken away from us,” he said.

The benefits of visitors are especially clear for older adults with cognitive impairments, who are at risk for delirium in hospital settings.

“I think it’s really vital and important that hospitals see that family caregivers are as integral to the patient outcomes for older patients as they are for children and pregnant women,” said Terri Harvath, a professor and director of the Family Caregiving Institute at UC Davis Health.

“There’s actually strong data that support that older patients, particularly older patients with cognitive impairment, or communication challenges, do better when they have a family caregiver there to support and advocate for them.”

While the state’s policies make allowances for people with physical and cognitive impairments of all ages, there is no exception specifically for older adults, a public health department spokesperson said.

Harvath has personal experience with the importance of these policies. Last year, her partner was hospitalized in Canada, and Harvath had to fight to be by her side. “She would have died had I not been there because she had several episodes where her (tracheostomy) got occluded, and she was too confused to put on her call light,” Harvath said.

In the absence of visitors, Tammy Hshieh, an associate physician at Brigham and Women’s Hospital and the Dana-Farber Cancer Institute who has studied delirium, recommends that people keep calling their loved ones.

“It can’t replace human touch, and human presence,” she said. But “that love that you have with each other, those emotions of love and caring or even sadness, patients realize that… these emotions don’t go away.”