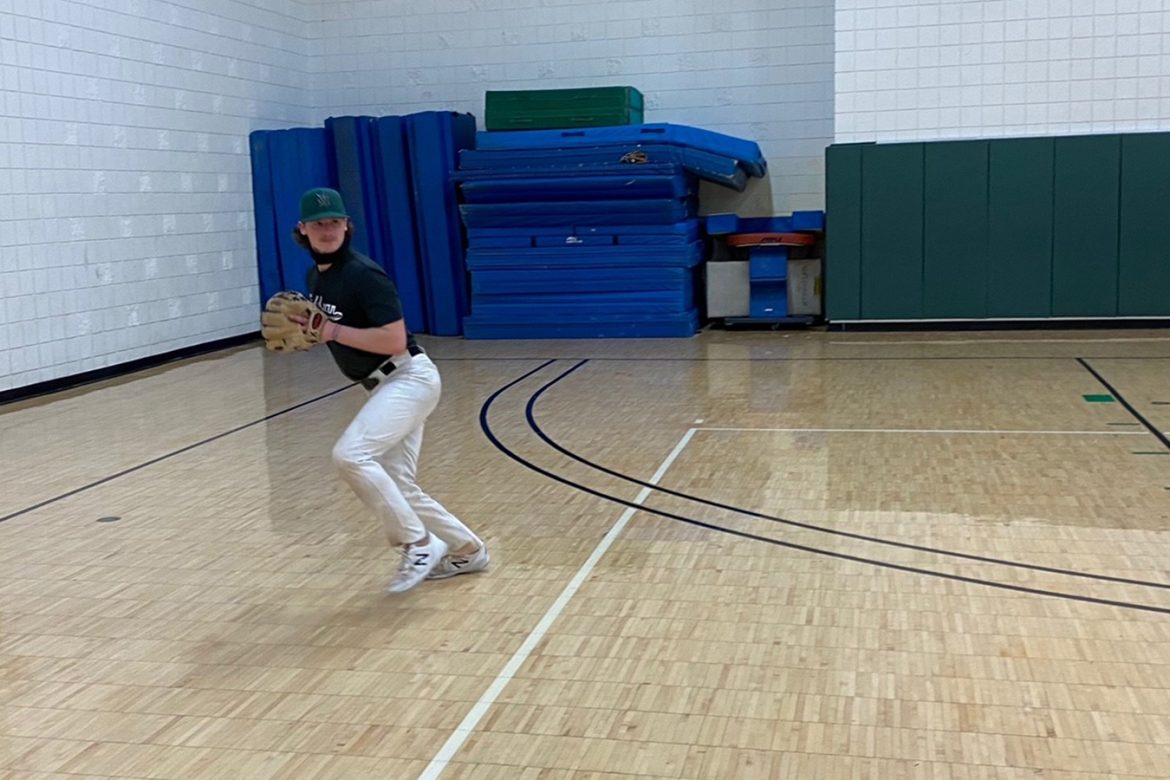 Glad to be returning to baseball, catcher Nathan Kassis, 18, practices ahead of the spring season for Dublin Coffman High School, outside Columbus, Ohio. (Tim Saunders)

This spring, high school senior Nathan Kassis will play baseball in the shadow of covid-19 — wearing a neck gaiter under his catcher’s mask, sitting 6 feet from teammates in the dugout and trading elbow bumps for hugs after wins.

“We’re looking forward to having a season,” said the 18-year-old catcher for Dublin Coffman High School, outside Columbus, Ohio. “This game is something we really love.”

Kassis, whose team has started practices, is one of the millions of young people getting back onto ballfields, tennis courts and golf courses amid a decline in covid cases as spring approaches. But pandemic precautions portend a very different season this year, and some school districts still are delaying play — spurring spats among parents, coaches and public health experts across the nation.

Since fall, many parents have rallied for their kids to be allowed to play sports and objected to some safety policies, such as limits on spectators. Doctors, meanwhile, haven’t reached a consensus on whether contact sports are safe enough, especially indoors. While children are less likely than adults to become seriously ill from covid, they can still spread it, and those under 16 can’t be vaccinated yet.

Less was known about the virus early in the pandemic, so high school sports basically stopped last spring, starting up again in fits and spurts over the fall and winter in some places. Some kids turned to recreational leagues when their school teams weren’t an option.

But now, according to the National Federation of State High School Associations, public high school sports are underway in every state, though not every district. Schedules in many places are being changed and condensed to allow as many sports as possible, including those not usually played in the spring, to make up for earlier cancellations.

Coaches and doctors agree that playing sports during a pandemic requires balancing the risk of covid with benefits such as improved cardiovascular fitness, strength and mental health. School sports can lead to college scholarships for the most elite student athletes, but even for those who end competitive athletics with high school, the rewards of playing can be extensive. Decisions about resuming sports, however, involve weighing the importance of academics against athletics, since adding covid risks from sports could jeopardize in-person learning during the pandemic.

Tim Saunders, executive director of the National High School Baseball Coaches Association and coach at Dublin Coffman, said the pandemic has taken a significant mental and social toll on players. In a May survey of more than 3,000 teen athletes in Wisconsin, University of Wisconsin researchers found that about two-thirds reported symptoms of anxiety and the same portion reported symptoms of depression. Other studies have shown similar problems for students generally.

Before letting kids play sports, though, the Centers for Disease Control and Prevention said, coaches and school administrators should consider things like students’ underlying health conditions, the physical closeness of players in the specific sport and how widely covid is spreading locally.

Karissa Niehoff, executive director of the high school federation, has argued that spring sports should be available to all students after last year’s cancellations. She said covid spread among student athletes — and the adults who live and work with them — is correlated to transmission rates in the community.

“Sports themselves are not spreaders when proper precautions are in place,” she said.

Still, outbreaks have occurred. A January report by CDC researchers pointed to a high school wrestling tournament in Florida after which 38 of 130 participants were diagnosed with covid. (Fewer than half were tested.) The report’s authors said outbreaks linked to youth sports suggest that close contact during practices, competitions and related social gatherings all raise the risk of the disease and “could jeopardize the safe operation of in-person education.”

Dr. Kevin Kavanagh, an infection control expert in Kentucky who runs the national patient safety group Health Watch USA, said contact sports are “very problematic,” especially those played indoors. He said heavy breathing during exertion could raise the risk of covid even if students wear cloth masks. Ideally, he said, indoor contact sports should not be played until after the pandemic.

“These are not professional athletes,” Kavanagh said. “They’re children.”

Overall, “there’s not much evidence of transmission between players outdoors,” said Dr. Andrew Watson, lead author of the study, which he is submitting for peer-reviewed publication.

Dr. Jason Newland, a pediatrics professor at Washington University in St. Louis, said all sorts of youth sports, including indoor contact sports such as basketball, can be safe with the right prevention measures. He supported his daughter playing basketball while wearing a mask at her Kirkwood, Missouri, high school.

Doctors also pointed to other safety measures, such as forgoing locker rooms, keeping kids 6 feet apart when they’re not playing and requiring kids to bring their own water to games.

“The reality is, from a safety standpoint, sports can be played,” Newland said. “It’s the team dinner, the sleepover with the team — that’s where the issue shows up. It’s not the actual games.”

In Nevada’s Clark County School District, administrators said they’d restart sports only after students in grades 6-12 trickle back for in-person instruction as part of a hybrid model starting in late March. Cases in the county have dropped precipitously in recent weeks, from a seven-day average of 1,924 cases a day on Jan. 10 to about 64 on March 3.

In early April, practices for spring sports such as track, swimming, golf and volleyball are scheduled to begin, with intramural fall sports held in April and May. No spectators will be allowed.

Parents who wanted sports to start much earlier created Let Them Play Nevada, one of many groups that popped up to protest the suspension of youth athletics. The Nevada group rallied late last month outside the Clark County school district’s offices shortly before the superintendent announced the reopening of schools to in-person learning.

Let Them Play Nevada organizer Dennis Goughnour said his son, Trey, a senior football player who also runs track, was “very, very distraught” this fall and winter about not playing.

With the reopening, he said, Trey will be able to run track, but the intramural football that will soon be allowed is “a joke,” essentially just practice with a scrimmage game.

“Basically, his senior year of football is a done deal. We are fighting for maybe one game, like a bowl game for the varsity squad at least,” he said. “They have done something, but too little, too late.”

Goughnour said Let Them Play is also fighting to have spectators at games. Limits on the numbers of spectators have riled parents across the nation, provoking “a ton of pushback,” said Niehoff, of the high school federation.

Students, for their part, have quickly adjusted to pandemic requirements, including rules about masks, distancing and locker rooms, said Matt Troha, assistant executive director of the Illinois High School Association.

Kassis, the Ohio baseball player, said doing what’s required to stay safe is a small price to pay to get back in the game.

“We didn’t get to play at all last spring. I didn’t touch a baseball this summer,” he said. “It’s my senior year. I want to have a season and I’ll be devastated if we don’t.”