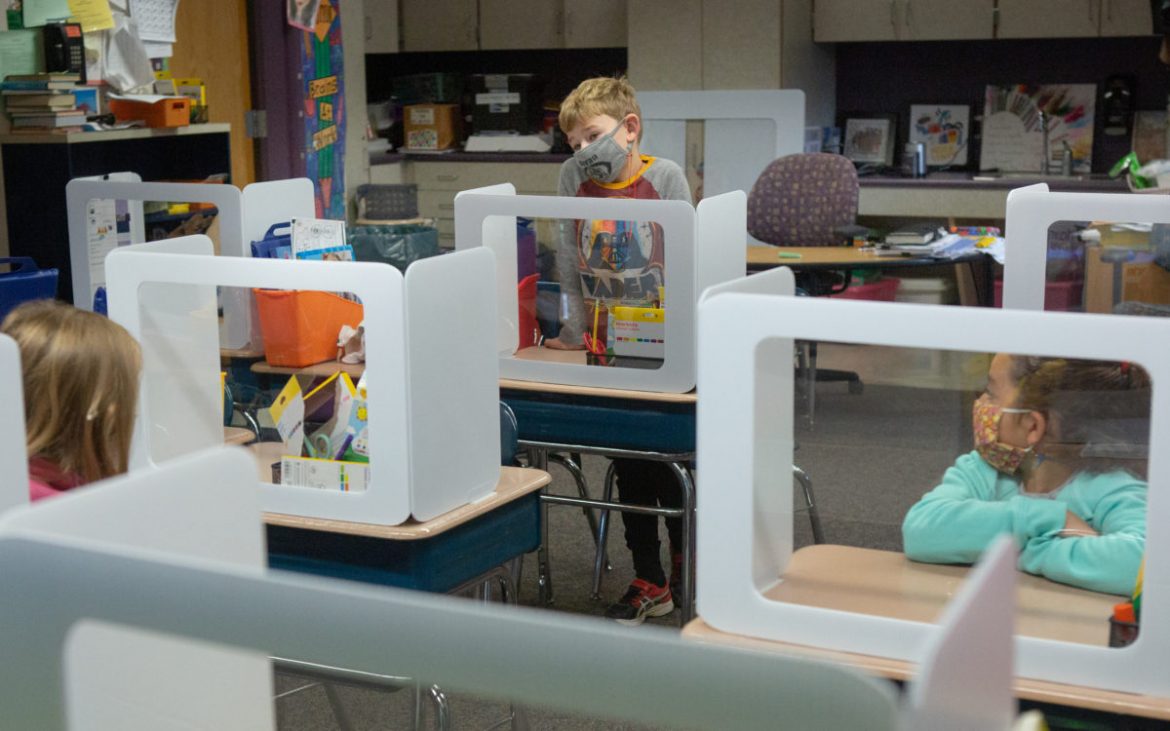 In alignment with new federal guidance, Gov. Gavin Newsom and the California Department of Public Health have halved the minimum social distancing requirement in schools from 6 feet to 3 feet.

The change may enable many school districts to resume full-day, in-person instruction before the end of this school year, instead of having to remain in full distance learning or resorting to a hybrid model, with fewer students at one time attending fewer hours per week, because of distancing constraints.

Aides to Newsom briefed representatives from school organizations late Friday about several rules changes, and the California Department of Public Health announced them on Saturday.

The revisions, which will also enable middle and high schools in counties with high rates of Covid infection to reopen sooner, should help resolve a lawsuit that parent groups from six school districts in San Diego County filed against the state and their districts. The lawsuit charged that state public health officials failed to provide a scientific rationale behind stricter reopening rules. Last week San Diego County Superior Court Judge Cynthia Freeland agreed and issued a temporary injunction against the state, pending a hearing on April 1.

On Friday, the CDC shored up the parents’ case when it officially released the guidance that recommended keeping students in elementary grades a minimum of 3 feet apart. That would also be the standard in middle and high schools, unless Covid-19 infection rates are high — the equivalent of California’s purple tier — and schools are not keeping students in separate cohorts. Under those conditions, the social distancing would increase to 6 feet.

The California Department of Public Health’s revised guideline is simpler: 3 feet social distancing is “strongly recommended” but not required, as long as other safety measures are in place and enforced. These include requiring students and staff to wear masks, install proper ventilation and have contact tracing and virus detection protocols in place. Covid vaccinations also must be offered to all school staff before the reopening of schools. Social distancing will increase during lunch and breakfast to 6 feet, under the new state guidelines.

The CDC, which initially had recommended social distancing of 6 feet, made the change because of new U.S. and international studies that showed not only that Covid transmission has been low in schools where students are required to wear masks, but also that it didn’t make an appreciable difference whether social distancing was 3 feet or 6 feet.

The most persuasive evidence was from a Massachusetts study of 250 school districts serving half-million students with nearly 100,000 staff. The study was conducted over 16 weeks in the fall and winter. Researchers found no significant distinction in the spread of the virus in districts with 3 feet compared to those with 6 feet social distancing. Masks are universally required in Massachusetts.

“Now that there is substantial evidence pointing to the fact that 3 feet of distance doesn’t cause higher rates of Covid-19, it will be possible to bring more students back to full in-person schooling, even with the current school infrastructure,” a co-author of the study, Elissa Schechter-Perkins, a professor of emergency medicine at the Boston University School of Medicine, told The 74.

The change in policy coincides with the reopening of schools in many California districts and the beginning of planning for resumption of full in-person instruction in the fall. With transmission rates quickly falling over the past month, only 11 counties, primarily in the Central Valley and rural areas, remain in the purple tier, where the rates of infection are highest. The rest are in orange or red, in which both elementary and secondary schools are permitted to open.

Newsom made $2 billion in funding conditional to the phasing in of in-person instruction by April 1.

Under the most recent state department of health guidance, issued in January, the state was requiring the 6-foot distancing where feasible, with a 4-foot minimum when creating hybrids and cohorts was not possible. County health officials have interpreted that differently, with some permitting 4 feet and some sticking with 6 feet.

For districts where many parents have said they’d rather continue with distance learning than transition to a partial reopening under a disruptive hybrid schedule of half-days or alternate weeks, halving the distancing requirement could make a big difference. A 6-foot distancing model requires a 36-square-foot bubble, while a 3-foot distance requires only a 9-square-foot bubble, mathematically permitting quadruple the number of students in a classroom. That would permit a full return to school instead of a maximum of 12 to 15 students in a typical classroom — parents and teachers willing.

The timing of a return to school in many districts may be contingent on renegotiations with employee unions. For those districts that tied the reopening to state public health guidelines, reopening may be easier than those that already have made reopening contingent on other criteria, such as community infection rates or complete protection from a two-shot vaccination.

Also, parents who believe it is unsafe to send their kids back this year with the 6-foot rule — from a third to more than half, depending on the district or community — may not be persuaded by studies that say it’s now safe at 3 feet. At least for the rest of the current school year, districts must provide distance learning as an option.

“Having quickly looked at today’s announcement, this move from 3-foot distance for students in schools will be among myriad challenges for our large urban school districts and those that haven’t yet prepared to fully implement the necessary, multilayered mitigation measures that the CDC says are essential regardless of the spacing between students in classrooms. School districts must follow through on implementing all those safety measures including vaccinations, wearing masks, handwashing, sanitization, adequate ventilation and testing and tracing,” Boyd said in a statement.

“We can’t let our guard down now. Using these safety protocols, we can regain the confidence needed to teach and learn in classrooms. Additionally, public health officials have rightly cautioned, the new variants are a concern.”

One person who questions whether adopting the CDC’s policy alone will go far enough — even though that’s what she and about 650 other physicians called for in a letter — is Jeanne Noble. Noble, associate professor of emergency medicine at UC San Francisco, and director of UCSF’s Covid response, was an organizer of the letter, which was sent to Newsom and Mark Ghaly, secretary of California’s Department of Health and Human Services, hours before aides disclosed that Newsom planned to do what they asked.

While pleased that Newsom “is listening to the science,” she said, “Given that some school districts are already noting that they do not intend to revise their hybrid plans based on this policy change,” Newsom “must not shy away from” ordering in-person instruction a full five days a week for all of the state’s children.

“It is my hope that he issues such a mandate by April 1 so that our middle and high school students are back in the classroom for full time instruction for the last 10 weeks of this academic year,” she said.

Scott Davison, a co-director of the Carlsbad Parent Organization, one of the groups that filed the lawsuit against the state and six San Diego County districts, said he was “elated” that the California Department of Public Health moved so quickly to revise the reopening guidelines.

“The combination of the lawsuit and the CDC changes pushed the dam over,” he said. “The timing was more than we had hoped for.”

In suspending the state’s social distancing rules, Judge Freeland’s temporary injunction also ordered the six districts to show why they shouldn’t open up schools to full-time instruction. They will file their response by Thursday in advance of a hearing on April 1. The districts are Carlsbad, Oceanside, Poway, Vista and San Marcos, all unified districts, and the San Dieguito Union High School District.

Davison agreed with Noble that some districts will likely continue with previous hybrid plans, notwithstanding the new 3-foot recommendation, and said he expected more lawsuits to force them to expand reopening now.

One of the provisions that the lawsuit successfully challenged prohibited middle and high schools from reopening until the county level of infections declined to the red tier, while allowing elementary schools to open in the purple tier. The new state regulation allows any school to reopen when the average daily rate of new infections falls below 25 new cases per day, which is in the upper range of purple.

Currently, only 11 of 58 counties, mostly rural, remain in purple, so the change will affect few students. However, in the event of another surge, the new regulation will enable schools to remain open until the rate of community infection is very high.

The following wording on social distancing in a classroom was amended on March 20, 2021:

“Maximize space between seating and desks. Distance teacher and other staff desks at least 6 feet away from student and other staff desks. Maintaining a minimum of 3 feet between student chairs is strongly recommended. A range of physical distancing recommendations have been made nationally and internationally, from 3 feet to 6 feet.