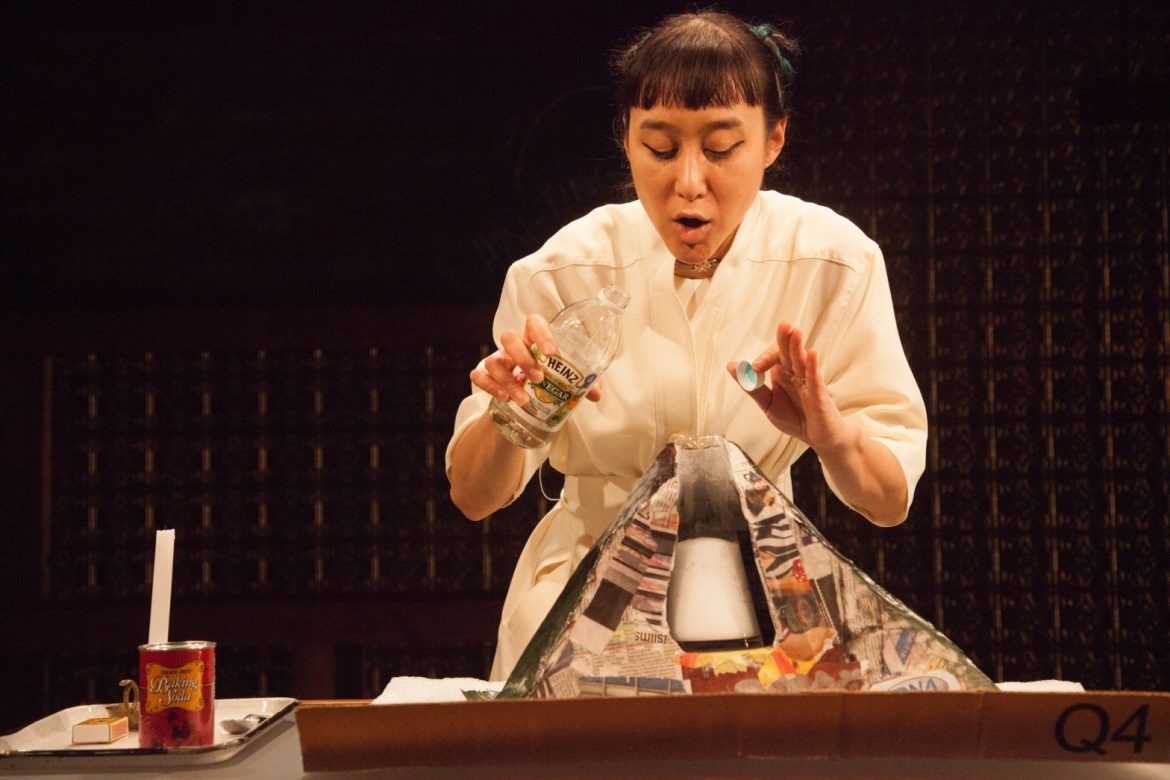 Mezzo-soprano Hai-Ting Chinn performs her eclectic show, “Science Fair: An Opera with Experiments” which will be live-streamed this weekend by The Marsh. (Kate Milford/The Marsh)

Around and around and around she goes again: Wheeee! That giant ride called the SkyStar Wheel in San Francisco’s Golden Gate Park, stilled by the pandemic for the past 95 days, is open for business again, with safety precautions, as of noon on Thursday. The 15-story wheel, with its 36 enclosed but well-ventilated “gondolas” offers its gleeful (but still masked) fans stunning views from Marin’s green hills to downtown’s skyscrapers and beyond as it makes its four stately revolutions per ride.

The reopening, made possible by San Francisco’s move down from the restrictive purple COVID tier to the red, will take these safety measures: Gondolas will be thoroughly cleaned between each ride; each car will carry only friends and family members; social distancing will be practiced in wait lines; and hand sanitizing and temperature tests will be on site for staff and riders. Tickets are $18 for the general public and $12 for those 65 and over and 12 and under, available at skystarwheel.com. But SkyStar, in cooperation with the city’s Recreation and Park Department, is offering this year’s graduating seniors one free summertime ride between June 2 and Sept. 6.

The big wheel is located on the park’s Music Concourse on the plaza near the de Young Museum and the California Academy of Sciences. Hours of operation are noon to 10 p.m. Monday through Friday, 10 a.m. to 10 p.m. Saturday and Sunday.

The fiddle and the feet: San Francisco Symphony violinist Helen Kim and the contemporary dance company Post:ballet join forces to present seven short works for dance and solo violin, including three world premieres, filmed in the acoustically haunting and architecturally intriguing West Oakland 16th Street Station by cinematographer Ben Tarquin. “Playing Changes,” the title of both this inspired collaboration and one of its pieces, begins streaming for free Thursday on sfsymphonyplus.org. The seven composers include Kim’s husband, Samuel Adams, who encouraged her to begin planning the program with Post:ballet artistic director Robert Dekkers back in May and contributed an excerpt from his 2020 work, “Violin Diptych.” Dekkers and eight of his company members are the featured dancers, performing in “Knee Play 2” from Philip Glass’ “Einstein on the Beach,” “Cradle Dance” by Elizabeth Ogonek, “Filter” by Daniel Bernard Roumain, “fly, into the light” by LJ White, “Water and Dust” by Mary Kouyoumdjian and Ambrose Akinmusire’s “kodo.” If you’re interested, you can get a short preview here: https://youtu.be/KW4aZLQlzew

Songs for Women’s Day: International Women’s Day is Monday and a pair of Bay Area venues are streaming concerts this weekend to mark the occasion. The Freight & Salvage in Berkeley is presenting two concerts on Saturday by acclaimed Chilean/New York jazz singer Claudia Acuna, performing live with a full band from the Academy of Music Theatre in Northampton, Mass. The early show (noon) will touch on tracks from her six studio albums, including 2019’s Latin Grammy-nominated “Turning Pages.” A 5 p.m. show finds Acuna exploring the art of the bolero. Each show costs $15, and a live Q&A with Acuna at 4 p.m. Saturday costs $20. And you can take in both shows and the interview for $40. Go to thefreight.org. Meanwhile, SFJazz’s Fridays at Five concert series this week will broadcast a 2018 show pairing famed singer-songwriter, musician and performance artist Laurie Anderson and the great Bay Area pianist Tammy L. Hall. The show is 5 p.m. Friday (hence the series’ name), and you must be a SFJazz digital subscriber to access the show — a year’s subscription costs $60. Go to ww.sfjazz.org

Singing science lover: It’s not unheard of for opera performers to sing about science (S.F. Opera premiered John Adams’ “Doctor Atomic” in 2005, after all), but chances are you’ve never seen a musical show like “Science Fair,” which is streaming this weekend via The Marsh performance venue in San Francisco. Subtitled “An Opera with Experiments,” mezzo-soprano’s Hai-Ting Chinn’s stage show serves up a blend of operatic singing, science lectures, classroom-style experiments and even a wearable model of the solar system. Chinn’s comedic performance also features pianist Erika Switzer and humorous slideshows from Maki Naro. Chinn, who really does have a fancy for science, has performed with the New York City Opera and starred in a touring production of the Philip Glass/Robert Wilson opera “Einstein on the Beach.” She premiered “Science Fair” as a livestreaming show last November. This week’s reprise livestreams 5 p.m. Saturday and includes a live post-show Q&A with Chinn and Marsh founder/artistic director Stephanie Weisman. The show by itself will be available for viewing through midnight Sunday. Access is free, but donations are encouraged. Go to themarsh.org

Pandemic play: San Francisco’s New Conservatory Theatre Center is presenting the world premiere of GLAAD Media Award-winning playwright Harrison David Rivers’ COVID-19-themed work “Interlude,” which offers a unique perspective on life during the pandemic. It centers on Jesse, a gay black man who is forced by the plague to return to his childhood home in Kansas and live with his conservative parents. Starring H. Adam Harris, the solo work is presented as an audio play with an accompanying “storyscape” slideshow. Harris and Rivers have worked together before. In fact, the actor played the same character Jesse in Rivers’ Black Lives Matter-themed drama “This Bitter Earth.” “Interlude,” directed by ShawnJ West, is available streaming through March 24. Access is pay-what-you-wish, with a suggested donation of up to $40, depending on the number of viewers. Go to www.nctcsf.org