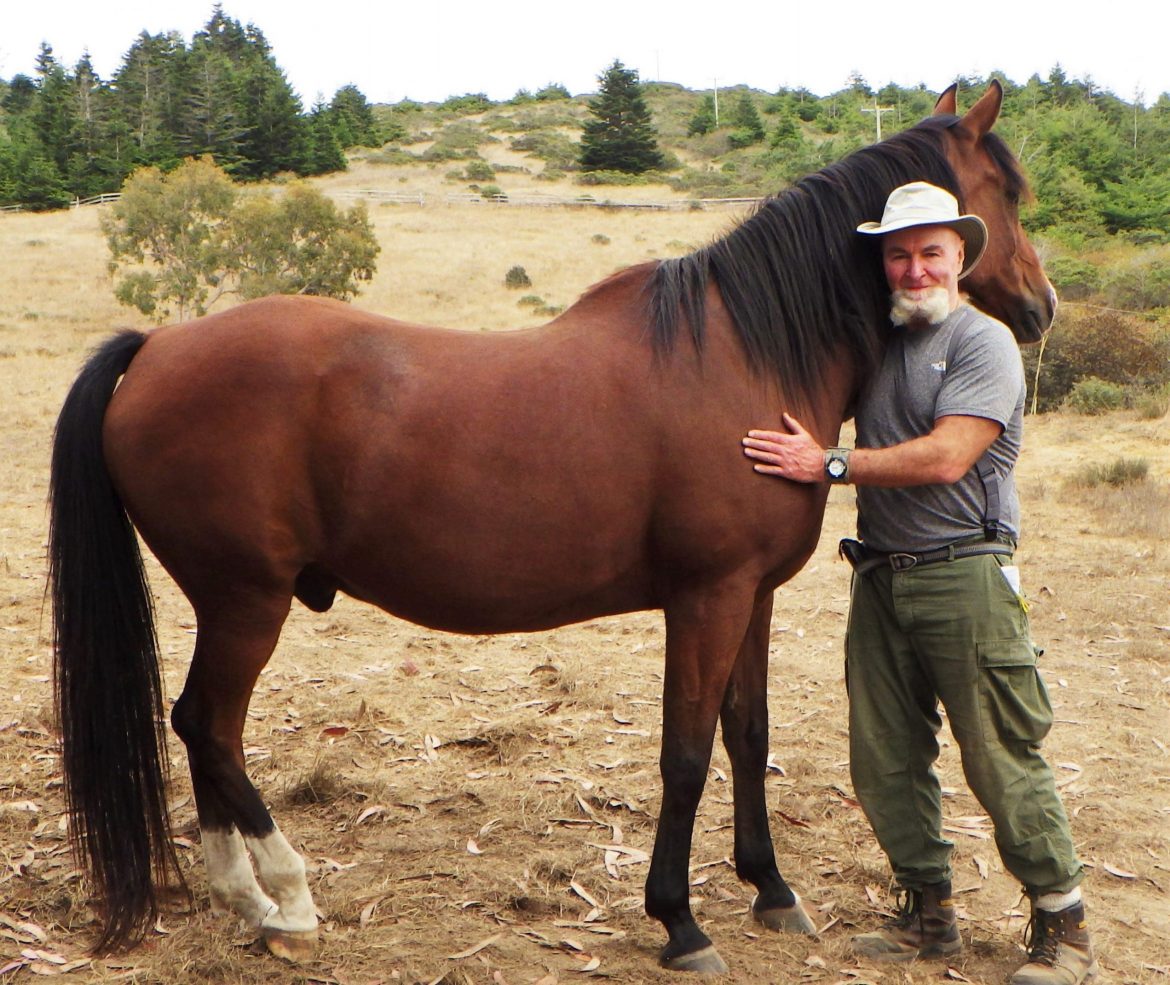 Novelist and outdoor journalist Paul McHugh hangs out with his friend. (Courtesy of Paul McHugh)

Hoity-toity Atherton lies in shambles while the Stanford Medical Center has been overtaken by a gang.

On the geographic side of things, a large swath of the Northern California coastline now has gotten homesteaded by two distinct communities — one that is pious and spiritual, the other spirited and wild.

Welcome to Bay Area novelist Paul McHugh’s dystopian California, a throwback to Old West society that has come about because of a solar flare that torched all of our technology.

Similar dystopian adventures dominate our pop culture landscape, but the former Bay Area outdoor journalist’s “Came a Horseman: A Hard Ride in a Fierce World” does something other than summarily destroy the modern world. McHugh tosses in a murder, a Hatfield-and-McCoy-like feud and even bouts of philosophy.

From the novel’s gestation, the 70-year-old author vowed to inject freshness into his genre-hopper, and the result is a page-turner that’s less preoccupied with the whatnots of what sent society into a tailspin than how people are coping after the cataclysmic reset.

“I think a lot of post-apocalyptic work goes whole hog in describing the apocalypse and that can be very exciting writing but also has a curious sameness to it,” the mid-Peninsula resident says. “You have damage and destruction. You have screaming people and fraught relationships. And even though the apocalypse may change from the attack of Godzilla to the impact of an asteroid, there’s a sameness to it. What is not the same and what is more intriguing to me is human adaptation to challenge, human adaptation to crisis.”

The reader gets presented with a lively discourse on that, along with allusions to ancient history. McHugh’s thorough and brisk world-building presents us with two societies: the rule-rigid Elysians, adopters of a pecking order, and the Tribe, which is made up of rogues living in trees and hanging out with multiple partners.

Enter Kyle Skander, the book’s sharp-talkin’ philosophy prof protagonist. He washes up on a beach after a kayak accident and immediately becomes Suspect No. 1 in a slaying.

All of this makes for one propulsive read, written in a muscular style reminiscent of McHugh’s robust background as an outdoor journalist for the San Francisco Chronicle and the San Francisco Examiner. McHugh freelanced for both publications from 1978 to 1985 and then served a long stint as the Chronicle’s outdoor feature writer/editor from 1985 to 2007. He continued to freelance after that and wrote a Veteran’s Day poem published in 2020.

It was a degree in poetry that pulled McHugh’s reins on the path to writing about his big passion, the outdoors. (One of “Came a Horseman’s” best passages arises late in the book when Kyle recounts the kayak accident.)

McHugh entertained the idea of becoming a novelist after earning his poetry degree.

“I tried to take a clear-eyed look at the future of what that meant, and I would have had to become an academic and publish poetry on the side,” he says.

He chipped away at a manuscript, and in 1980, he published “The Search for Goodbye-To-Rains.” Since it didn’t take off like a John Grisham novel, McHugh decided to sprint into another career direction.

When he left his Chronicle staff job and migrated into a freelance role, McHugh revived his novel plans and cooked up the journalistic murder-mystery “Deadlines,” an award-winner that earned praised from former TV anchorman Dan Rather and critics alike.

“I did that to celebrate all that I had seen about the world of journalism and reportage and also to emphasize what I thought was going to be one of the big issues of journalism, which is if investigative local journalism will survive,” McHugh says.

For “Came a Horseman,” he galloped into the territory of high concept, something Hollywood adores.

“It can easily be overdone,” says the movie fan. “It’s like chemistry. You can have a combustible mix that blows up in your face. Or you can be a successful mixologist like a popular bartender and combine unusual ingredients and make a tasty drink, and that’s a goal.”

“The mid-level authors really have to worry,” he says. “If their book doesn’t take off in two weeks or a month, they’re hosed. It’s back to pulp city.”

Given that, self-publishing turns out to be the better route, most times.

“A lot of what I’m doing, you have to do anyway,” he says. “Why not just bloody do it and get all of the royalties rather than just half of them?”

* “Came a Horseman: A Hard Ride in a Fierce World” (ElkHeart Books, $16.95) is available on Amazon and other outlets. For more information on McHugh and his other works, visit www.paulmchugh.net)