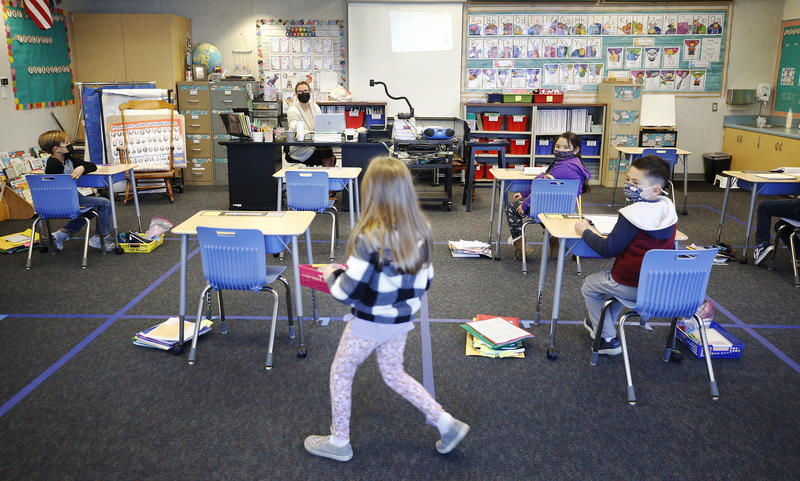 A growing number of school districts in California are moving toward reopening campuses, but the process has been complicated, in some cases resulting in districts near each other operating on vastly different reopening schedules.

Most schools in Los Angeles Unified are closed for in-person instruction, but many in nearby Orange County are open. Elementary schools in Piedmont — a small city in Alameda County — are open but in adjacent Oakland they’re closed. In the Central Valley, Merced High School is open but Turlock High, just up Highway 99, is mostly closed.

Gov. Gavin Newsom has proposed an incentive plan intended to prod schools to reopen, but superintendents and school boards in each district must also answer to teachers, parents and local public health officials — many of whom have competing demands.

“It’s been incredibly challenging,” said Alameda County schools superintendent LK Monroe. “Superintendents get into this field because we want to solve problems and make things better for kids. But this is a time when it’s really difficult to know if you’re making the right decision. … And the stakes are very high.”

The decision to reopen campuses lies with district superintendents and school boards, who rely on federal, state and county public health data to determine when and how it’s safe to reopen. They also have to consider a wide array of safety measures: masks, plastic shields and hand-washing stations; Covid testing for students and staff; the availability of vaccines; classroom disinfecting; social-distancing protocols and upgraded ventilation systems.

Teachers can also play a major role in the decision to reopen campuses. In some districts, teachers unions have the ultimate say because their membership has to approve changes to their contracts that would allow for in-person working conditions. In other districts, teachers have limited input or options about returning to the classroom because changes in their working conditions don’t require changes to their contracts.

The amount of resources in a district has so far has not been a factor, researchers found, except that suburban districts might have more staffing and space to implement a hybrid model, and newer buildings that have modern ventilation systems.

“The biggest pattern we’ve noticed is that reopening plans tend to be very much based on locale,” said Alice Opalka, a research analyst for the Center for Reinventing Public Education. “But it’s tough. There’s state guidelines, county guidelines. Districts feel they’re going at it alone.”

Opalka and her colleagues have been tracking 477 districts across the country, examining trends in how schools are providing instruction during the pandemic. They’re also tracking schools that have opened but then rolled back in-person instruction due to an outbreak at school or when virus rates spiked in their communities.

Opalka and her colleagues have several theories as to why many large urban districts have remained closed, including:

“As difficult as the decision was to close school classrooms, reopening is even harder,” Beutner said last week. “We cannot — and will not — compromise on health and safety.”

Meanwhile, in Fullerton School District in nearby Orange County, elementary and middle schools have been open for in-person instruction since October, with students having an option to continue with distance learning if they choose. Capistrano Unified, Orange County’s largest district, has a hybrid model for high schools while elementary students are attending in person. Neither district is requiring vaccinations for school staff.

Mary Barlow, Kern County superintendent of schools, said the experience of reopening schools is like “running a multi-national corporation,” balancing a constant stream of data and guidelines.

“One day I was on one call, texting with someone else, a second phone was ringing, and I’m trying to watch the governor on TV issue new guidance,” she said. “It was chaos. But as frustrating as it can be, I feel like we’re continually improving.”

“It made a world of difference. We were able to pivot quickly, and discuss data as it came up, going beyond whatever guidance we were getting from the Centers for Disease Control and California Department of Public Health,” she said.

“It’s been very challenging because people don’t understand why some districts are closed while a neighboring district might be open,” Barlow said. “We tell them that each district needs to decide what’s best for the kids in that community. … We’re all trying very hard to put measures in place to get schools reopened as soon as possible.”

One thought on “Why some school districts are open for in-person instruction but in some cases, neighboring ones aren’t”