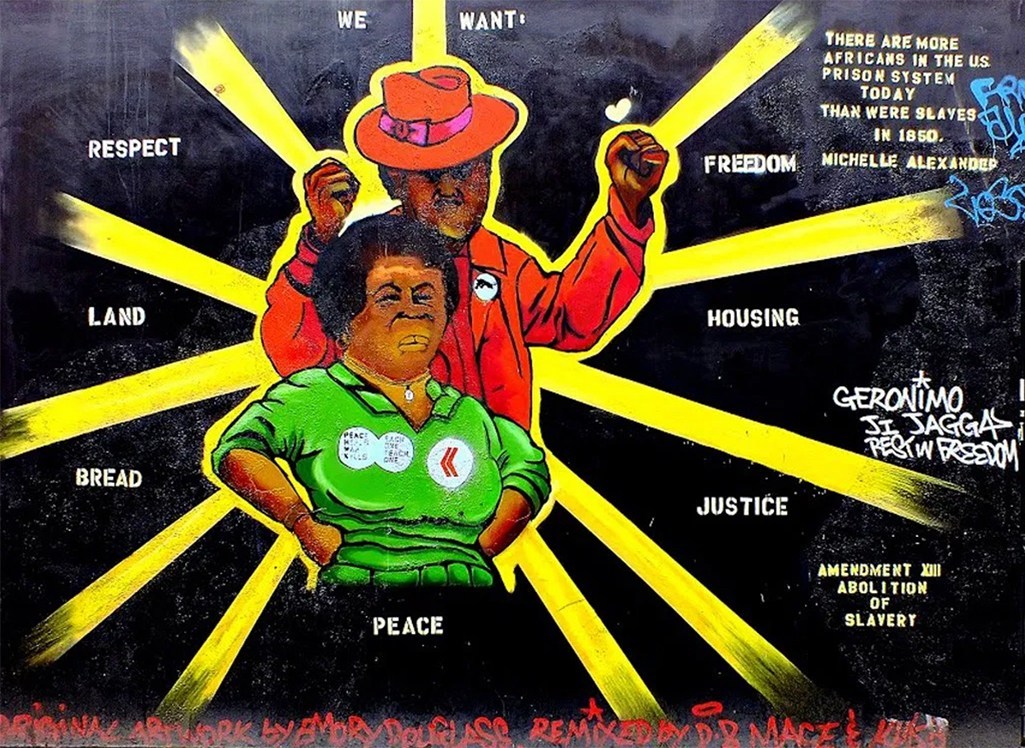 “Wall + Response” is a new poetry performance project out of the Clarion Alley Mural Project, which brings 16 Bay Area poets together to respond to four murals on Clarion Alley in San Francisco.

In 2019, poet Maw Shein Win was approached by artist and CAMP (Clarion Alley Mural Project) organizer Megan Wilson to co-curate the “Wall + Response” project, which “would bring poets together to respond to the selection of murals in Clarion Alley,” Win says.

Over the past 15 years, they have worked together on other collaborations such as Broadside Attractions: Vanquished Terrains, which was a two-year project that sought to push the interpretation of the form further.

The goal of CAMP is to cultivate innovative and socially conscious public art on Clarion Alley, which, thanks to CAMP, is covered in murals from end to end. The entire alley runs a block length and can be found in San Francisco’s Inner Mission District sandwiched between Mission and Valencia streets while paralleling 17th and 18th streets.

Over the past few years, Clarion Alley has become very social media friendly with more than 200,000 visitors every year. However, for locals, “the alley is a place where artists and people live, and it has a history of bringing them together,” Win says. CAMP began in 1992, and poetry, in particular, has been an integral part of its history.

Each of the four murals in “Wall + Response” has four assigned poets who were asked to write original response pieces. Because of the pandemic, the “Wall + Response” project had to be reimagined. Originally, the project was supposed to have live readings. “Instead, what we’re doing is making films of the poet’s readings,” Win says.

The first filmed reading of poets responding to the mural, “Justice for Luis D. Gongora Pat,” took place in November 2020 and filming for the second, responding to “What We Want!”, wrapped up in early February. The project’s filmmaker is Mahima Kotian.

Karla Brundage is one of the participating poets and the founder of West Oakland to West Africa, an international poetry exchange project. “When I looked at the mural, I was thinking about the Black Panthers and what it means to be from Oakland,” Brundage says.

“What We Want!” features a woman with a small afro in a green shirt with hands on her hips and, behind her, a man in all red holding up two fists. They are encompassed by a yellow halo with what would be described as shooting rays. Between the rays, it reads, “We want respect, freedom, land, housing, justice, peace and bread.” On the top right corner, a powerful quote by Michelle Alexander, author of “The New Jim Crow: Mass Incarceration in the Age of Colorblindness,” reads “There are more Africans in the U.S. prison system today than were slaves in 1850.”

The “Wall + Response” event arrives just shy of two weeks after a large mural honoring the women of the Black Panther Party — commissioned by activist Jilchristina Vest and painted by artist Rachel Wolfe-Goldsmith — was unveiled on Vest’s Victorian home on the corner of Center and Ninth streets in West Oakland. It’s also a week since a street sign honoring a late party leader was unveiled in the same neighborhood: Three blocks of Ninth Street near Mandela Parkway were renamed as Dr. Huey P. Newton Way.

Brundage had a unique upbringing as her mother, Kathryn Takara, was a member of the party for some time.

Talking about her mother, Brundage says, “she knew Eldridge Cleaver and Angela Davis personally. So when we did the mural writing, it evoked all these different memories for me.”

In looking at the mural, she sees a man and woman equally represented.

For her, that is powerful, considering that the media portrayal of the Black Panther Party tends to be male-dominated. “I love how strong and bold they look here,” Brundage says.

Much of her response poem speaks to Black men and Black women in partnership and how they can evoke change through community. Despite there being 16 participating poets responding to four different murals, Brundage believes that their response pieces will be similar. “I hope that people will deepen (their understanding of) and appreciate the art,” she says.

In the pandemic, art is no longer entertainment but a form of coping. “I feel that people are in need of art, poetry — all arts right now,” Win says.

In the beginning stages of the “Wall + Response” project, poets had the opportunity to Zoom with the artists of the murals to help them in their writing process. In addition to the films, the project is doing broadsides, which are visual reinvisionings of poetry — an image alongside a poem, Win says. These will be printed by Sun Night Editions, a West Oakland-based fine-art print publishing house.

Each participating poet will get a handmade box by Asa Nakata complete with a set with 20 broadsides. Some additional box sets will be made for sale at a later date. “I love opening up more community and meeting new ones,” Win says.

* “Wall + Response” will have its second free screening event at 7 p.m. Friday. This event features the poets Karla Brundage, Jennifer Hasegawa, Tureeda Mikell and Kim Shuck responding to the mural “What We Want!” by Emory Douglas of the Black Panther Party, remixed by CUBA (Clarence Robbs), D8 (David Petrelli) and MACE (Alex Douhovnikoff). To watch, you must RSVP at https://app.gopassage.com/events/wall-response-2. Learn more about upcoming “Wall + Response” events here: https://clarionalleymuralproject.org/wall-response/.