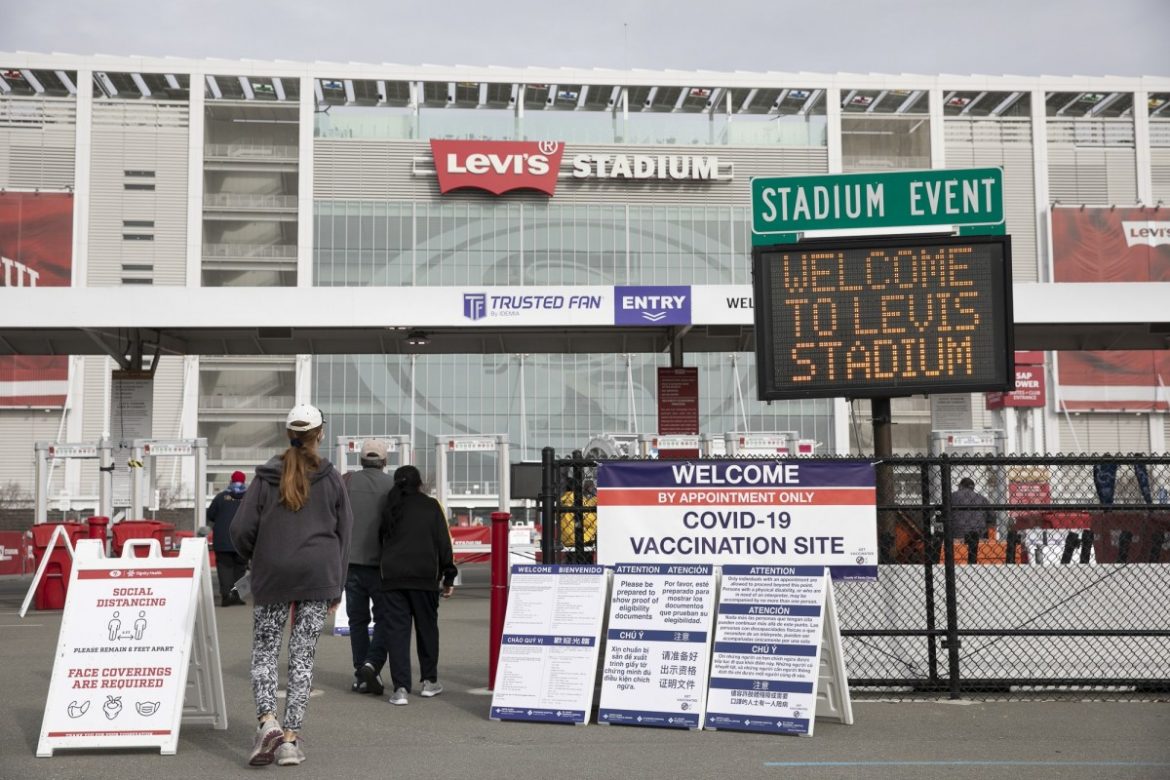 Patients enter Levi’s Stadium to receive Pfizer COVID-19 vaccines on Feb. 9 2021 in Santa Clara. The 49ers arena opened on Tuesday as a vaccine distribution site for Santa Clara County residents 65 and older and is expected to inoculate up to 15,000 people per day once supplies become available. Photo by Anne Wernikoff, CalMatters

Under the state’s previous guidelines, people with chronic conditions did not qualify for vaccinations until people 65 and older, first responders, food industry workers and educators were vaccinated.

Under the new guidelines, people ages 16 to 64 with serious health conditions — such as heart, lung or kidney disease, diabetes, cancer and weakened immune systems — or with disabilities will join older Californians and some essential workers beginning March 15.

State officials estimate that group could number between 4 and 6 million people, bringing the total number of vaccine-eligible Californians next month to between 17 and 19 million.

The move is “consistent with our response focused on saving lives, focused on promoting equity and, of course, getting to the other side of the pandemic,” Dr. Mark Ghaly, California’s secretary of health and human services, said at a press briefing today.

Ghaly said delaying it for a month will allow the state to build its vaccine supply, develop ways to determine eligibility and figure out how to reach people who are homebound.

Disability advocates had mixed reactions to the state’s changing priorities.

“The explicit inclusion of people with high risk disabilities is a welcome change in the administration’s position, but the piecemeal recognition of people with high risk health conditions, the failure to acknowledge the elevated exposure and health risks of Medi-Cal beneficiaries who need home and community-based services in their homes, and the unexplained delay until March 15 are disappointing for all, and will be deadly for some, people with disabilities,” said Silvia Yee, senior staff attorney for the Disability Rights Education and Defense Fund.

Advocates had criticized Gov. Gavin Newsom for failing to prioritize some of California’s most vulnerable residents, saying he was sacrificing equity for speed.

The move comes as California speeds its previously sluggish pace of COVID-19 immunizations. More than 5.5 million doses have been administered to date, more than any other state. While California earlier ranked at the bottom of all states for its immunization rates, it now ranks 21st, according to federal data.

The newly eligible groups may be immunized by their medical provider or at mass vaccination clinics if their health permits, Ghaly said. Doctors will have discretion to vaccinate high-risk people who do not fall into the categories set by state officials.

California until last month had included people with disabilities or medical conditions in the same priority group as Californians between the ages of 65 and 74. They were listed in the tier just behind people aged 75 and older. But then the state moved to prioritize vaccinations primarily by age, targeting those 65 and older. That meant medically vulnerable people were left behind.

State officials have listed the severe conditions in an advisory for providers, including:

The federal Centers for Disease Control recommends that people with underlying conditions receive the vaccine alongside those aged 65 to 74. But states are allowed to adjust those priorities.

Other states vary in how they prioritize people with health conditions.

New York will start vaccinating people with high-risk conditions, including pregnancy and developmental disabilities, on Monday. Florida currently vaccinates people considered by hospital providers to be “extremely vulnerable” to COVID-19 along with those 65 and older. In contrast, Kansas has placed people under 65 with high-risk conditions behind people 65 and older, prisoners and those living in “congregate settings” that aren’t nursing homes.