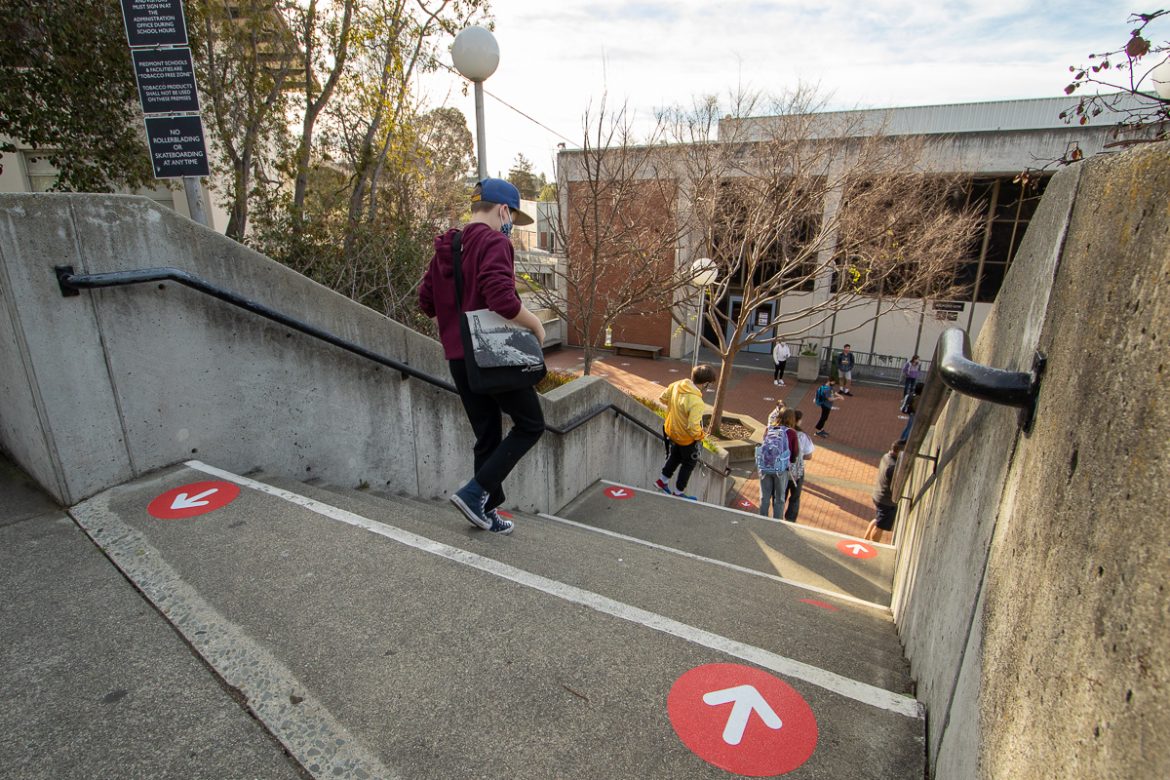 Sixth graders headed back to the PMS campus this week.

Although the main topic of discussion at Wednesday’s school board meeting was PUSD’s interdistrict transfer policy (see article HERE), the board received a reopening update from Superintendent Randy Booker and heard from a teacher as well as parents and students about the ongoing struggles they have faced this school year.

Booker’s update was brief, noting that the district has phased in its kindergarten through sixth graders — a milestone as PUSD approaches the one-year mark of the pandemic shutdown. He also noted that there was 100% compliance by sixth grade families in completing the daily health screener, an app that families must fill out every day before setting foot on campus, and he asked any seventh – 12th grade families who have not given the district their preferences for hybrid vs. distance learning to do so as soon as possible so the schools can plan cohorts arrangements for an anticipated return to school in March.

According to Booker, the Alameda County Health Director Dr. Nick Moss — the public health officer who is largely responsible for giving direction to school districts — told superintendents that he expects the county will move to the Red Tier by March 9. Booker said that date means PUSD is planning for a return of seventh – 12th grades to start on March 16. “That vaccinations have started to open up is an enormous game changer for all of us — we want to see all educators vaccinated. That’s going to make the concept of reopening, continued reopening into the fall even that much more of more of a reality,” he said.

The board also heard emotional testimony that highlighted the challenges they are still facing  in addressing the needs of all stakeholders. PMS sixth grade math teacher Karen Bloom told the board that “today was the hardest day of teaching” she had ever had in her career, and said more attention needed to be paid to teacher mental health. PHS student Julia Caputo described the heavy personal toll distance learning has taken, and PHS ASB President Audrey Edel told the board that just knowing the possibility of going to school is on the horizon is motivating, even for second semester seniors. “What can we do to make teachers more comfortable?” she asked.

Other callers expressed their gratitude for the first steps in reopening while pressing for more in-person time, including resident Linda Wendel and her elementary school-age daughter who thanked the teachers and staff for their work. but asked for longer middle school hours.

At the top of the evening, parent Laura Maestrelli, who leads an online group of parents actively advocating for the reopening of in-person, full-time school this fall, told the board that families would depart PUSD in significant numbers without a firm commitment and shared results of a parent-driven survey the group undertook in early February (the “PUSD 2021-22 Family Intentions Survey”) that aimed to quantify this sentiment.

Among the 406 respondents there was a clear view that district leadership and the school board had failed students and families, with approximately 50% saying they would not re-enroll their students next fall or give money to the Piedmont Education Foundation if schools do not re-open for full-time, in-person learning next fall.

In a popular Facebook group for Piedmont families, Maestrelli acknowledged shortcomings in the survey’s methodology — the survey was circulated on Facebook and among parents associated with the group — but she stood by the collection effort saying “lacking a PUSD-sponsored survey, this was our best attempt at gathering crucial data about what families are planning for the fall given a variety of reopening scenarios.” (It’s not possible to know whether or not these views are representative of all 1,629 families enrolled in the district. According to the raw survey data the Exedra reviewed, although many respondents expressed their anger and disillusionment with district leadership, a subset of the respondents expressed support for PUSD efforts to date. The survey, which was anonymized, appeared to skew toward elementary and middle school family responses. )

“We have said repeatedly that we are committed to reopening for full-time, in-person instruction this fall,” School Board President Cory Smegal told the Exedra on Friday.

One of the obstacles to getting the full student body back on campuses is the 6’ physical distancing requirement outlined in the June 2020 MOU between the teachers’ union and PUSD. Per the California Department of Public Health, as described in Alameda County’s COVID-19 school guidance,“schools should distance student chairs at least 6 feet away from one another, except where 6 feet of distance is not possible after a good-faith effort has been made.” It also says that if 6 feet of distance is not possible, “it is recommended to optimize ventilation and consider using other separation techniques such as partitions between students or desks or arranging desks in a way that minimizes face-to-fact contact.”

What constitutes a “good-faith effort” has been a matter of some debate, with some Bay Area school districts working with a 4 foot distancing parameter in order to bring more students back into classrooms.

In Marin County, where plans to return students to full-time instruction by April are underway, the guidelines read “where practicable, physical distancing of six feet is maintained between adults and between adults and students; four feet distance is permissible between students within a classroom or instructional area” as long as stable cohorts of students are in place, among other criteria.

A board discussion about fall reopening plans is set to take place at the March 24 meeting.

(Editor’s note: This article was updated on Feb. 28 to clarify the current guidance and position of the county’s public health department regarding physical distancing and adds new information about spacing and cohorting from Marin County, as a point of comparison.)