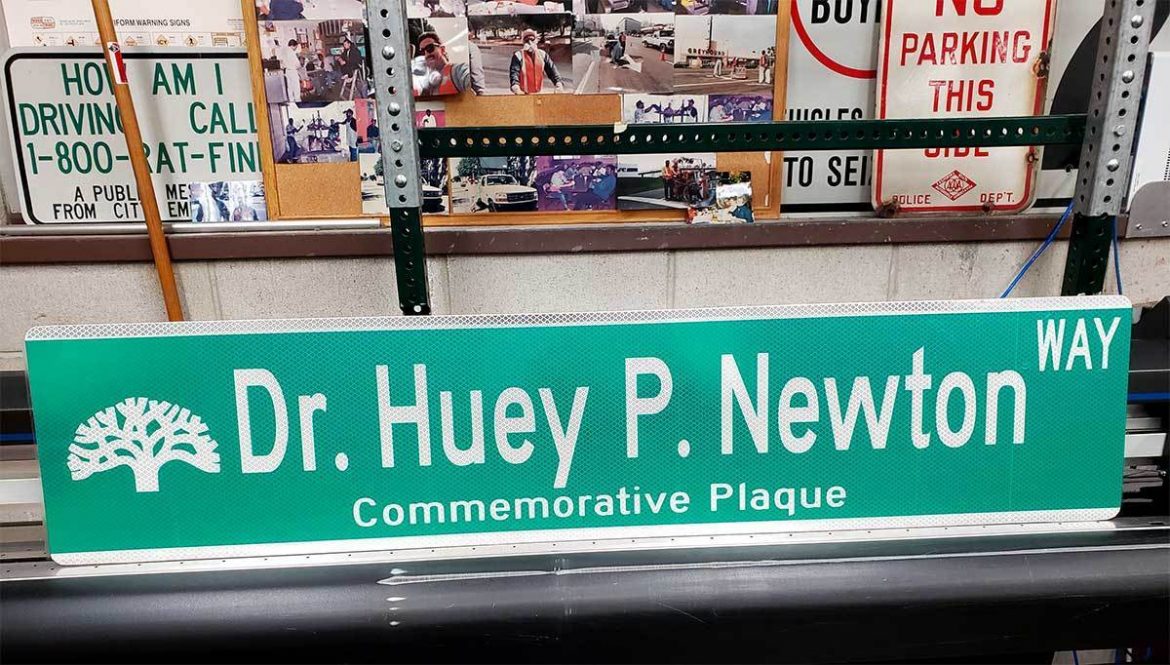 A street sign commemorating the legacy of Dr. Huey P. Newton was unveiled in Oakland on Wednesday. (Photo courtesy of city of Oakland)

Three blocks of a West Oakland street were named Wednesday morning for a co-founder of the Black Panther Party for Self-Defense.

The street sign for Dr. Huey P. Newton Way, in honor of the late activist, was unveiled on Ninth Street near Mandela Parkway.

“This place is both darkness and light,” Fredrika Newton told a crowd of perhaps 100 people who gathered to see the unveiling.

Huey Newton took his last breath nearby in 1989, when he was shot by Tyrone Robinson. Wednesday marked the 79th anniversary of Newton’s birth in 1942.

Fredrika Newton is now the president of the Dr. Huey P. Newton Foundation, which seeks to preserve and promote the history, ideals, and legacy of the Black Panther Party.

She initiated Wednesday’s street-naming, which was carried forward to the City Council.

In October, for the 55th anniversary of the founding of the Black Panther Party, a bronze bust of Huey Newton will be unveiled at the head of the street that was named for him Wednesday morning.

“This is a very special holiday,” Fife said, and challenged the crowd to work for change in the city.

The bronze of Newton is being created by sculptor Dana King, who on Wednesday said, “The Panthers were about people.”

“Huey is coming home for the people,” she said.

The Black Panther Party was founded in 1966 in Oakland by Huey P. Newton and Bobby Seale.

Newton was fatally shot by Robinson, a member of the group Black Guerilla Family. Robinson was convicted of murder in 1991 and sentenced to 32 years in prison.