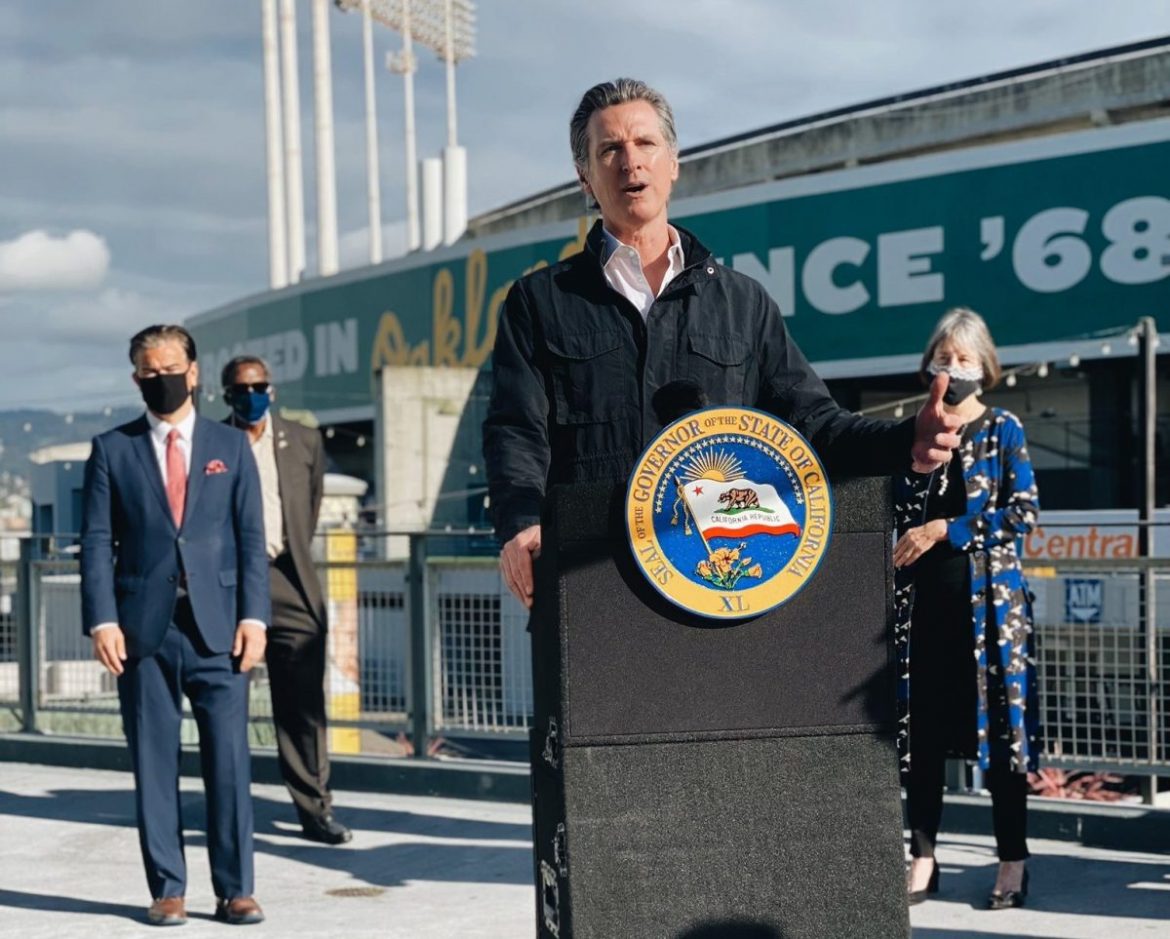 Gov. Gavin Newsom speaks at a briefing with state and local officials at the Oakland-Alameda County Coliseum. (Photo via Gavin Newsom/Twitter)

The state of California plans to launch a pilot partnership with federal officials to establish a community COVID-19 vaccination site at the Oakland Coliseum, Gov. Gavin Newsom said Wednesday.

The state will collaborate with the Federal Emergency Management Agency to operate the Coliseum vaccination site, part of a goal of President Joe Biden’s administration to establish 100 large-scale vaccination sites nationwide in his first 100 days in office.

“The reason this site was chosen was the framework of making sure that communities that are often left behind are not left behind, they’re prioritized in terms of the administration of these vaccines,” Newsom said at a briefing at the Coliseum.

The Coliseum is the first such site in the Bay Area and will have the capacity to administer some 6,000 doses per day once it opens on Feb. 16.

The Oakland-Alameda County Coliseum Authority’s Board of Commissioners, which oversees the property, and Oakland Athletics president Dave Kaval expressed interest last month in converting the Coliseum into a mass vaccination site, with Kaval targeting it to open as soon as February.

“We’ve obviously been hosting people here for generations to come to baseball games and football games and basketball games,” Kaval said Wednesday. “Now folks can come out, actually get their shot and get vaccinated.”

In an email to constituents, Rep. Barbara Lee, D-Oakland, said registration for vaccine appointments will be available through the state’s MyTurn scheduling system.

The Coliseum’s use as a vaccination site comes as California’s number of vaccine doses administered has surged in recent days, with nearly 3.8 million shots to date.

That has allowed the state to vault much closer to the national average of how much of its vaccine supply has been administered. Previously, California had been one of the slowest states in the country to distribute and administer its doses allocated from the federal government.

The state also recently contracted with Blue Shield of California and Kaiser Permanente as third-party administrators of the vaccination effort and switched to an age-based prioritization for who gets vaccinated, targeting the state’s oldest residents first.

“There’s never been a time where partnership has been more needed than now,” Oakland Mayor Libby Schaaf said. “And this partnership between the federal government, our great governor … and local communities like Oakland and Alameda County is going to accelerate the delivery of vaccines and get us back to normal as quickly and as safely as possible.”

Newsom said the state is expected to receive 1,060,000 doses this week, but the federal stockpile of doses is still not equipped to adequately supply a state of California’s size.

“No one is satisfied with the pace of distribution of these vaccines,” Newsom said, noting that some parts of the state have had to cancel vaccination appointments due to a dearth of doses.

“Of course we have more work to do, but we have made demonstrable progress,” he said, “and we will continue to build on that over the course of the next days, weeks and months until we eradicate and eliminate this disease.”