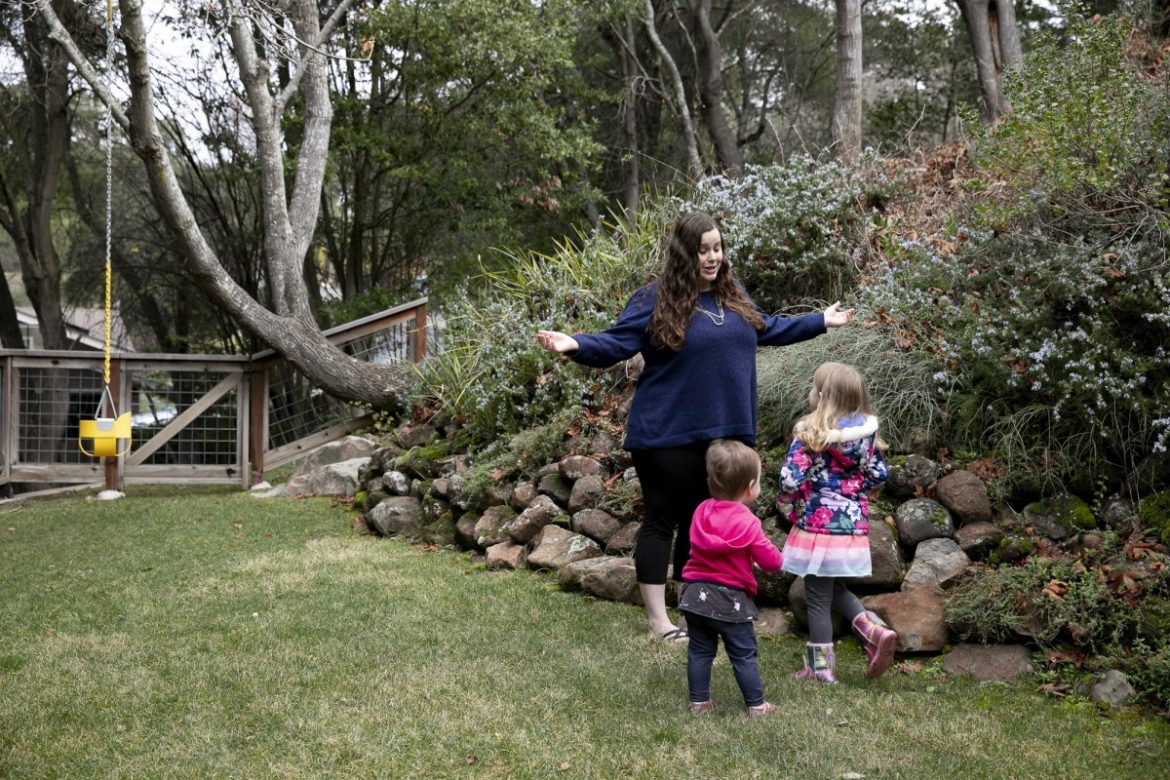 Gennie Gorback, President-Elect of the California Kindergarten Assocation, plays with her daughters, Cece, almost two, left, and Tilly, 4, right, at their Orinda home on Feb. 3, 2021. Photo by Anne Wernikoff, CalMatters

Thousands of California families chose to keep their children out of kindergarten this past year, opting instead for other in-person programs or no school at all.

That means thousands — or potentially tens of thousands — more children than usual will be hitting first grade next school year without having been through kindergarten, putting even more stress on an already strained system.

California is one of 32 states where kindergarten is optional. It’s an option that experts have increasingly come to disagree with. Children that skip kindergarten, they argue, arrive in first grade behind their peers in key areas like reading.

“Learning through play is so important for brain development and social emotional development,” said Gennie Gorback, president-elect of the California Kindergarten Association.

Kids who have never gone to preschool or been in an organized setting need that kindergarten time to learn how to “do school,” said Gorback, a former preschool and transitional kindergarten teacher whose own child will start kindergarten in the fall. “Things like how to sit criss-cross applesauce, raise hands to get called on or to form a line.

“You don’t naturally know that, it takes time.”

What happened to the children of California families who chose to skip “zoom school” for their 5-year olds largely depends on their family’s income. Experts worry the most affected are children from low-income families, whose parents had to decide between continuing to work or sitting with their children through virtual learning.

“Among those that didn’t go anywhere at all there will be variances among the experiences they have at home,”  said Deborah Stipek, the Judy Koch Professor of Education at Stanford Graduate School of Education. “There will be parents who try to fill in the gap and those who may not know how to do that.”

The gap is expected to put pressure especially on first grade teachers, who will be required to differentiate students’ skills and try to get them caught up on basics they would have learned in kindergarten.

While an official number doesn’t exist yet — the California Department of Education is still compiling enrollment data and said it will not be ready until March — talking to school districts up and down the state suggests the number will be large.

The state’s largest school district — Los Angeles Unified — saw its overall enrollment decline 14%. The most significant decrease was in the kindergarten ranks, which lost 6,000 students. The San Diego Union School District showed a decline of 1,682 kindergarten and transitional kindergarten children. Sacramento City Schools also lost a crop of the youngest learners. As of December, the number of kindergartners was down by 600, a decrease of 18% from the prior year.

These districts are hardly alone.

Declining enrollment hit more than 60 percent of the state’s 1,000-plus districts and most of the drop happened in the earlier grades, Michael Fine, CEO of California’s Fiscal and Management Assistance Team told a legislative education committee last month.

“We suspect some of this might be because families may lack the ability to provide full-time support for online learning which is necessary for very young learners,” he said in August. “This is yet another reminder that this crisis is having a disproportionate impact on low-income families.”

Families with resources may have chosen to pay for private in-person schooling, small-group pods, or extended time in preschool programs, while low-income children, who stayed at home, may not be getting high quality enrichment experiences, said Anna Markowitz, assistant professor of education in the School of Education and Information Studies at UCLA.

Low-income families where parents work essential jobs may have had to choose between virtual school, where a parent has to sit with their child, and continuing to earn money to pay rent and buy food. Many may have also faced internet connectivity issues that frustrated the process and chose instead to keep the kids at home with family.

A McKinsey & Company study found that Black and Latino children are the most likely to experience learning loss because they have less access to quality remote learning or a conducive learning environment at home.

“Kindergarten and preschool programs help to equalize kids,” Markowitz said. “Without those experiences you are going to see a bigger stretch in their abilities. It will be academic but also experiences in a school-based setting, the practice of being in school.”

Kindergarten has become more academic in the last couple of decades as standards like No Child Left Behind and Common Core State Standards became the norm.

“Kindergartners are expected to learn a fair amount and the good news is they can,” said Stipek, of the Stanford Graduate School of Education. “We grossly underestimated how much they could learn in literacy, early math before.”

The other piece of critical learning that takes place in kindergarten is social emotional learning, said Adria Taha-Resnick, president-elect of the California Association for the Education of Young Children and a professor of early childhood education at CSU Channel Islands.

This is the ability to relate to others, learn how to regulate oneself, build confidence in interacting with teachers and others, and to feel safe and secure enough to speak out, said Taha-Resnick. She said that while children can catch up academically it’s difficult to re-do that important time when children are learning how to interact with their peers and teacher and learning about themselves in the process.

Experts worry that the achievement and opportunity gaps that already existed among low-income students and students of color will deepen under current circumstances.

“This early learning window is so important for learning critical skills,” said Jenny Hontz, a parent and spokeswoman for Speak Up, a Los Angeles parent advocate group. “It could take years for the kids to catch up and some kids may be permanently harmed by this.”

The group is advocating for schools to resume in-person learning as soon as possible, especially for special needs students and English language learners who have an even harder time with virtual learning.

Hontz said the district is considering mandatory summer school and extending next school year by several days but it’s not enough.

“It’s going to take all hands on deck thinking, longer school days or longer school years, really intensive intervention to make sure the kids get what they need,” she said.

This is why there’s been ongoing efforts, including again this year, by legislators and advocates to make kindergarten mandatory in California.

Baldwin Park Democratic Sen. Susan Rubio is behind the current bill in Sacramento to require it.  Rubio said there is a misconception about kindergarten that needs to be updated, especially among her peers in the legislature.

That kind of intensive work is going to need to include differentiating among students, learning about their experiences and figuring how to best help them, Stipek said. But much of it is going to need additional resources.

“There’s a lot of extra things that can be done to make up for some of the disadvantages but they are costly, they are not free,” Stipek said. “So there will be huge variability in what districts do.  We need to be extra vigilant to ensure that the kids who need it get the help.”

Teachers, in particular, will face an extra burden this next year as students enter the classroom with greater variability in their skills than ever. Districts will need to help them by providing additional resources like summer school, tutoring and involving parents, she said.

Taha-Resnick recommends that districts mix children who skipped kindergarten into classrooms with kids of all levels because young children tend to also learn from one another.

Gorback, of the California Kindergarten Association, said the organization is going to focus its spring development series on what teachers will need and how to best differentiate students when there are wide gaps between them.

Schools may need to build a kindergarten-like curriculum for first grade teachers to use to cover some of the skills that were missed, Markowitz.“This is a problem that will be evident in other grades but will be amplified in 1st grade,” Markowitz said. “We are not going to hold back an entire year of kids.”