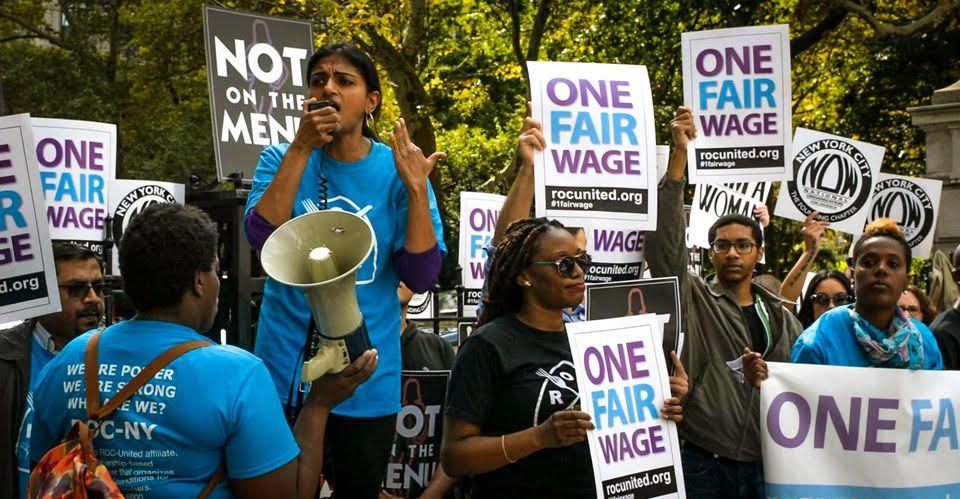 Saru Jayaraman — the co-founder/co-director of the Restaurant Opportunities Center United and director of UC Berkeley’s Food Labor Research Center — speaks at a rally against sexual harassment in “Waging Change.” (Courtesy of One Fair Wage)

Oakland documentary maker Abby Ginzberg reveals a shocking reality for some out-of-state restaurant workers struggling to pay the rent in “Waging Change”: a check for $0.00.

It is but one of the giant eye-openers in her documentary, airing at 8 p.m. Feb. 19 on KQED.

The topic is a timely one, to say the very least, with Democrats rallying to raise the federal minimum wage and debate swinging back and forth over providing more economic relief from the COVID-19 pandemic. Ginzberg’s film seems as if it was made just seconds ago.

Ginzberg specializes in addressing urgent topics like those raised in “Waging,” untangling and illuminating issues that pertain to racial and social justice. She masterfully profiles not only those who are affected but also the people who are working hard to foster change.

Her Peabody Award-winning work uncovers hard truths and provides historical perspective. That was the case in her previous documentaries, “And Then They Came for Us,” “Agents of Change” and “Truth to Power: Barbara Lee Speaks for Me,” among others.

We caught up with the ever-busy filmmaker and emailed her a few questions about “Waging Change,” which features U.S. Rep. Alexandria Ocasio-Cortez, Lily Tomlin, Jane Fonda and others.

“Waging Change” is an eye-opener in many regards, particularly the subminimum wage and how some restaurant workers are making just $2.13 an hour. How did you learn about the issue, and what prompted you to make the documentary?

Ginzberg: I was at an event where Saru Jayaraman (co-founder/co-director of the Restaurant Opportunities Center United and director of UC Berkeley’s Food Labor Research Center) spoke, and I was shocked to learn that there was a subminimum wage.

I was so stunned that it was legal to pay so little that it led me to want to learn how did we get here and what has kept these wages so low? (Answer: The National Restaurant Association). They agreed not to oppose raising the regular minimum wage in exchange for the tipped minimum wage being frozen at $2.13 since 1991. This speaks to their power and influence in Congress, and it has taken decades just to educate people that this two-tier system exists.

Your documentary does show just how influential the National Restaurant Association is, and how the organization lobbies lawmakers. Have they responded to your film?

Ginzberg: They have not responded to the film as far as I know.

President Biden recently talked about tabling the issue (right now) of raising the federal minimum wage. Why is this such a divisive issue, particularly during times when many workers are struggling?

Ginzberg: I believe Biden, who is a major supporter of raising the minimum wage, only mentioned that it might be compromised out of the stimulus package bill that is currently under consideration. That does not mean that it will not be introduced in the Senate. The House is already on record supporting raising the minimum wage and ending the tipped minimum wage. They have re-introduced the Raise the Wage Act recently into the current House (it passed earlier in 2019 as demonstrated in the film), but they have not voted on it yet. Here is a piece I saw (recently) demonstrating the Congressional Budget Office (CBO) thinks raising the minimum wage will be good for the economy and certainly good for low wage workers:
https://www.epi.org/blog/cbo-analysis-confirms-that-a-15-minimum-wage-raises-earnings-of-low-wage-workers-reduces-inequality-and-has-significant-and-direct-fiscal-effects-large-progressive-redistribution-of-income-caused/

One of the most startling images in “Waging Change” occurs when a restaurant employee flashes to the camera a check from his employers for $0. Do you see that as being a common occurrence or more of an anomaly?

Ginzberg: In $2.13 states it is common because if the employer is only paying $16 and change for an 8-hour shift, then the taxes negate that amount earned in actual wages, especially if the employer has to withhold taxes and many do. You would see income in the seven states that require the payment of minimum wage — but there are still 17 states that only require the $2.13.

After making this film, did you become a bigger tipper? Should people tip more?

Ginzberg: I have always tipped 20%, but now that I am aware of the issue of the tipped minimum wage, when I am in a $2.13 state like Georgia or Nebraska or a $3+ tipped minimum-wage state like Michigan, I tip more.

I also engage with servers about their experiences with the tipped minimum wage, and one of the most depressing responses I heard was from a waitress in Nebraska who teaches developmentally disabled kids and has to supplement her bad teacher salary by being a waitress on weekends.

The point is made in the film that people who work full time should not have to work two 8-hour jobs just to feed themselves and their kids. I completely agree with that, yet, in $2.13 states, that is exactly what workers have to do. So we need a living wage for everybody, and if we delay in enacting the $15 an hour wage (which does not hit $15 until 2025), we will continue this unsustainable two-tier wage system.

One other point regarding tipping is that it is always better to leave the tip in cash since that means the server or bartender gets it immediately and is not dependent on the owner having to pay it out of the credit card bill.

You have been heralded and received awards for your social justice documentaries, from “And Then They Came For Us” — which reflected on the commonality in the WWII Japanese internment and the Mulim travel ban — to “Truth to Power: Barbara Lee Speaks for Me.” What social justice issues do you want to address in the future?

Ginzberg: I have not started production on another film, but I am interested in telling more stories that reflect the economic and racial inequality that is reflected in “Waging Change.”

I also will be working on the outreach for the Barbara Lee film since so many of the ideas in that film are timely — particularly her call for a Truth, Racial Healing and Transformation Commission, which could create a way for us to truly examine the impact and legacy of slavery in America.

We have to ask: How did you get Jane Fonda and Lily Tomlin in “Waging Change”?

Ginzberg: I got them in the film by asking them to be interviewed, but Saru and her team got them to come to Detroit where they did four to five events a day over a three-day period and we just followed them with a three person crew — me, a cameraperson and a sound engineer. They were both seriously committed to this issue — they paid their own way to Detroit — and they could not have been more gracious in their willingness to participate in the film and on the ground.