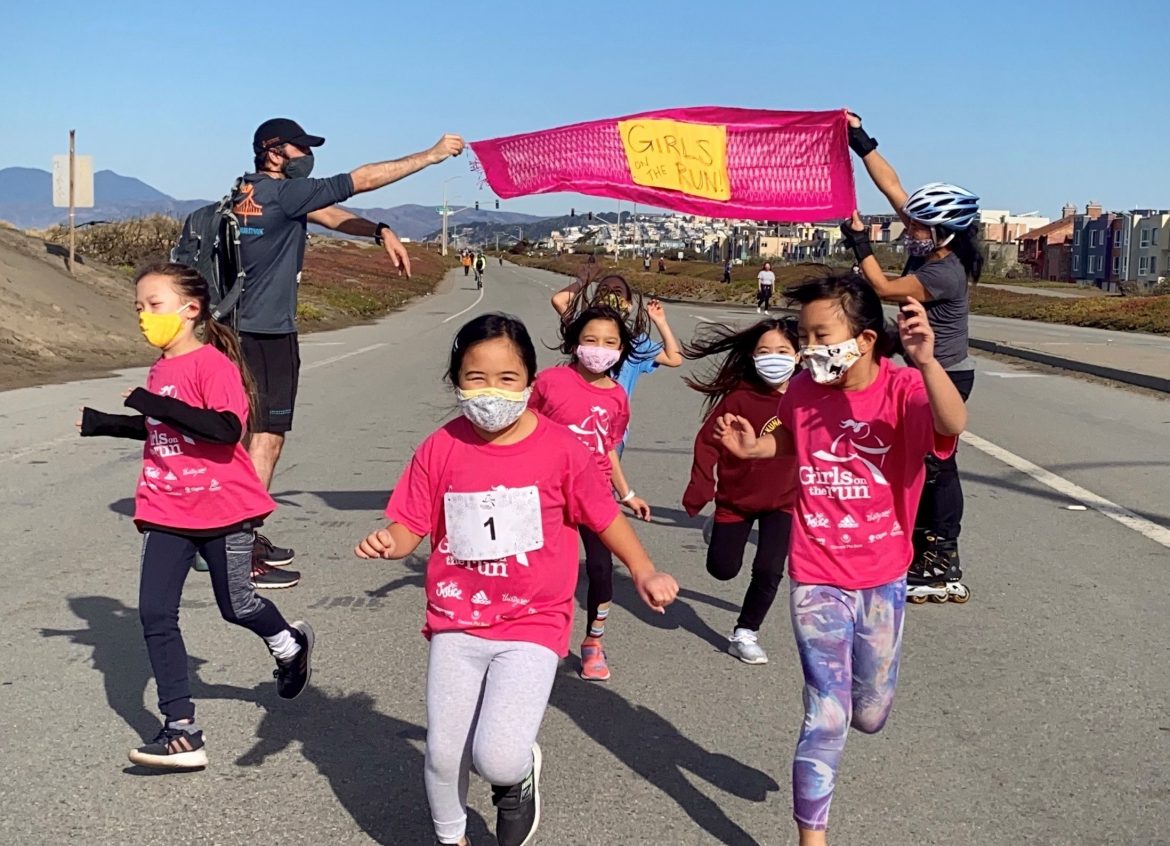 Even before the onset of pandemic-induced quarantine, Blue, a sixth grader in Alameda, was feeling the weight of isolation.

She wasn’t able to see her friends, and while she used to play soccer and take ballet classes, she got a lot less exercise once the pandemic began. Then Blue’s mother Dafné, who ran with her daughter from time to time, heard about a program that could give Blue the chance to build both endurance and friendships.

It was called Girls on the Run.

“It wasn’t originally something I wanted to do; I’m shy,” Blue said. “They helped me get to know the other kids, and did things like getting us to become stronger, getting us out there to not be scared of public speaking. It’s really helped me.”

For 10 weeks in the fall, Blue and a small group of other girls in sixth to eighth grade met up at the local park to train for a 5K race. It gave the girls a chance to socialize, albeit masked and at a distance, while relieving the sense of being cooped up. Blue beat her personal goal in the fall season 5K, and is prepping to best that time this spring. Dafné has taken note of the differences.

“It was really neat to see how excited she was every week,” Dafné said. “I would see her progress (and) how much happier she was.”

Blue is just one of thousands of girls pounding the pavement with the Bay Area chapter of Girls on the Run (GOTR), an international nonprofit that fosters “social-emotional learning” for adolescent girls through communal exercise and activities intended to build confidence. Since Girls on the Run of the Bay Area was founded in 2002 (the national organization has been around since 1996), it has helped more than 24,000 girls form healthy connections with others, face their fears and, of course, run a 5K. During the pandemic, the local chapter has digitized its curriculum, restructured its in-person program and rallied an international cohort of coaches and volunteers to persevere in 2021.

Prior to the pandemic, the program largely collaborated with schools and operated as a twice-weekly after-school program for girls third to eighth grade at roughly 50 sites across the Bay Area, working with 500 volunteer coaches from all walks of life. There are two 10-week “seasons” per year that align with the school year, and culminate in a 5K race. (Don’t worry, participants can walk if they need to.)

The 2020 spring season began just as Bay Area counties started shutting down to quarantine. There was a learning curve transitioning to Zoom, but the group managed to coordinate distanced 5K races with the girls, and it created Youtube content to encourage cardio and yoga.

Tessa Artale, a teacher at Daniel Webster Elementary School in San Francisco, has been involved with Girls on the Run since 2016, when her college roommate introduced her. She started her own site at the school and serves as the associate board co-chair.

“It’s still a really big challenge for students,” she said of adjusting to the pandemic. “And third to fifth grade is such a vulnerable age for girls. It was so great to see the girls connect with each other and feel safe outside.”

As both a coach and teacher, Artale said she’s made strong connections with her students that continue to inform her work.

“I love being there for girls over multiple years, getting to know them and their families really well and supporting them in their communities,” Artale said.

Summer break last year also gave GOTR time to update its curriculum after the murder of George Floyd and the reemergence of the Black Lives Matter movement in public conversation. A majority of participants in GOTR are girls of color, Muriel said, and part of the organization’s mission is to “empower our coaches to let the girls discuss social justice topics.”

For GOTR alumna Natasha Marangu, the space for these heavy discussions was just as important as the running. Marangu participated in GOTR when she was in fifth grade in San Mateo, and she credits the program with giving her the gumption to pursue musical theater and move to an international boarding school in New Mexico for her junior and senior years of high school.

“I really enjoyed the support, and I thought it was really cool they wanted to expand the lessons,” Marangu said of the updated curriculum. “They realized girls really early on are affected by these issues.”

Muriel has also been approached by adults to provide a curriculum to cope with the layers of stress of this past year. Board Chair Megan Hitchner Ketchum has been involved with GOTR for the decade she’s lived in the Bay Area, and she knows firsthand how precarious the balancing act faced by many parents can be.

“As a working mom of three, I feel the pressures of juggling work and child care without the usual support for me or my kids,” Ketchum wrote in an email. “I’ve had the opportunity to meet several families of girls who participated in our programs. I didn’t appreciate this when first volunteering for GOTR, but the program can be transformative for the girls’ entire family.”

Another coach, Elida Quintero, coaches girls in addition to her day job in tech at Oracle. Quintero relishes providing mentorship to girls that didn’t exist when she was growing up.

“Being with girls at this age is crucial,” said Quintero, who coached a group of seven girls in sixth to eight grade in the fall. “It’s rewarding to see them open up. I know I wish I had someone there to mentor me.”

The spring 2021 season will stick to the fall model of smaller, outdoor community groups, individual activity materials and multiple 5K races to deter crowds. Girls are training, coaches are prepping, and the board is looking ahead.

And since it’s snowing in New Mexico, preventing Marangu from running outside, she’ll probably just swing by the gym later; because even though her GOTR experience has ended, the teachings stay with her.

“With the right outlook and support, you can achieve anything, and community at times like these is very important,” Marangu said. “I really believe that these lessons carry with you. It can’t hurt to start early.”

The spring 2021 season for Girls on the Run of the Bay Area begins March 8. Learn more about registering, volunteering and board opportunities on their website.