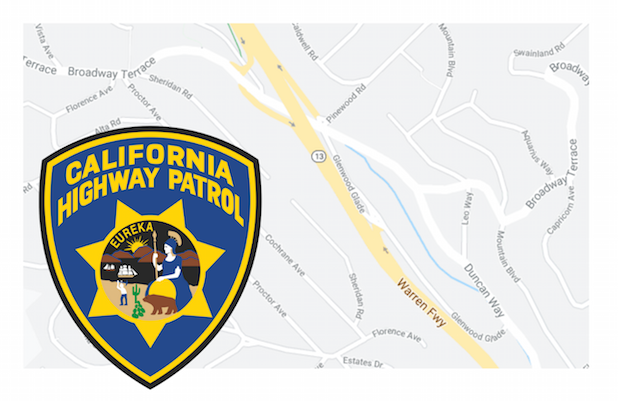 A woman died and another person was injured in a collision Wednesday afternoon on southbound state Highway 13 in Oakland, California Highway Patrol officials said.

The collision reported at 12:20 p.m. just north of Broadway Terrace and remains under investigation, officials said. The CHP is requesting anyone with information about it to contact them.

Two people were standing on the right shoulder of the highway near their Honda Civic when a Toyota Tacoma struck the Honda, pushing it into the two, according to preliminary information from the CHP.

The driver of the Honda, a woman, died and her passenger was taken to Highland Hospital with major injuries.

The name of the woman was not available mid-Wednesday afternoon from the Alameda County coroner’s bureau.

CHP officers don’t know why the Toyota crashed into the Honda. The driver of the Toyota suffered moderate injuries. He was treated at the scene.

CHP officials do not suspect drugs or alcohol played a role in the collision. Anyone with information about it can call the Oakland CHP office at (510) 457-2875.