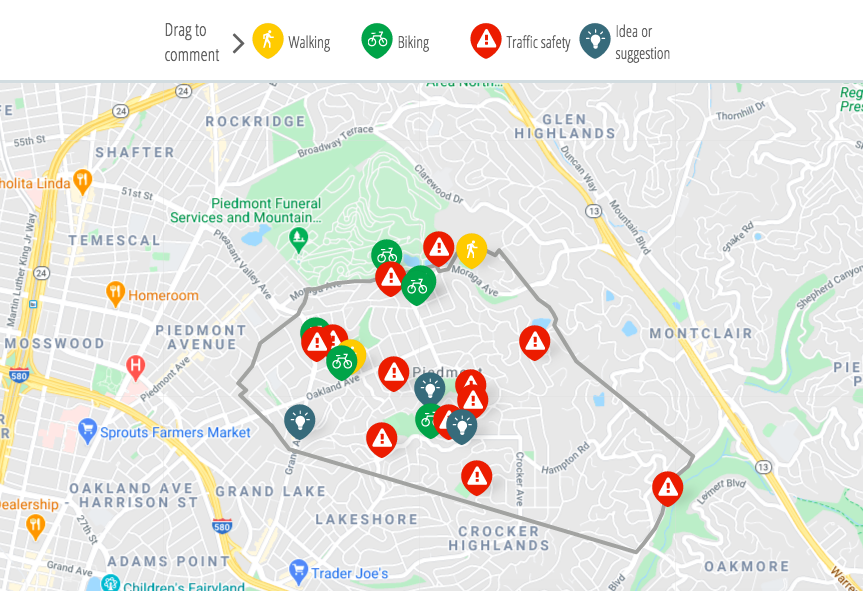 Residents could mark and comment on areas of concern on this pinnable map of Piedmont streets.

The city recently gathered input from residents on the needs and challenges around walking, biking and traffic safety in Piedmont. From Nov. 2020 – Jan. 2021, residents were invited to share thoughts via a survey, a pinnable map, a public workshop, and via the Safer Streets website. The report said the city received more than 2,500 comments from the public as part of the community needs assessment.

A report summarizing the key issues and themes raised by the public is now available HERE. and was presented at the Pedestrian and Bicycle Advisory Committee on Thursday, Feb. 11.

“The main concern expressed by commenters, perhaps by a large margin, is speeding traffic. Speeding is foremost a safety issue, especially for pedestrians and cyclists, who are more vulnerable users of the streets, but also for drivers. Speeding also has a corrosive effect on general neighborhood livability. Commenters’ suggestions for curbing speeding ranged widely, including physical traffic calming measures, educational campaigns, stop signs, lower speed limits and more police enforcement.

Specific to walking, the main concern, by far, is challenging crossing conditions for pedestrians at intersections. These conditions include poorly
marked crosswalks; the need for additional stop signs, crosswalks, bulbouts and street lighting; poor sight lines and visibility; and speeding drivers and drivers failing to yield to pedestrians. A secondary walking-related concern is gaps in sidewalk coverage and existing sidewalks in poor condition.

Regarding biking, the main need—other than addressing speeding—is to fill in gaps in the bikeway network, with segments of Moraga Avenue being among the most important gaps.

There are very mixed feelings regarding the Grand Avenue road diet. The project has improved safety for bicyclists and also pedestrians but causes back-ups, delays and spillover traffic onto adjacent streets.

Similarly, there are mixed feelings regarding recently installed low-cost intersection improvements, such as at Grand and Fairview Avenues and at Nova Drive/Magnolia Avenue. These enhancements slow down traffic and
make it easier for pedestrians to cross but are considered confusing and visually unattractive by many.

Another specific concern is inadequate visibility and sight lines at many locations throughout the city. Contributing factors include street curves,
on-street parking close to intersections, overgrown vegetation and inadequate nighttime street lighting.”