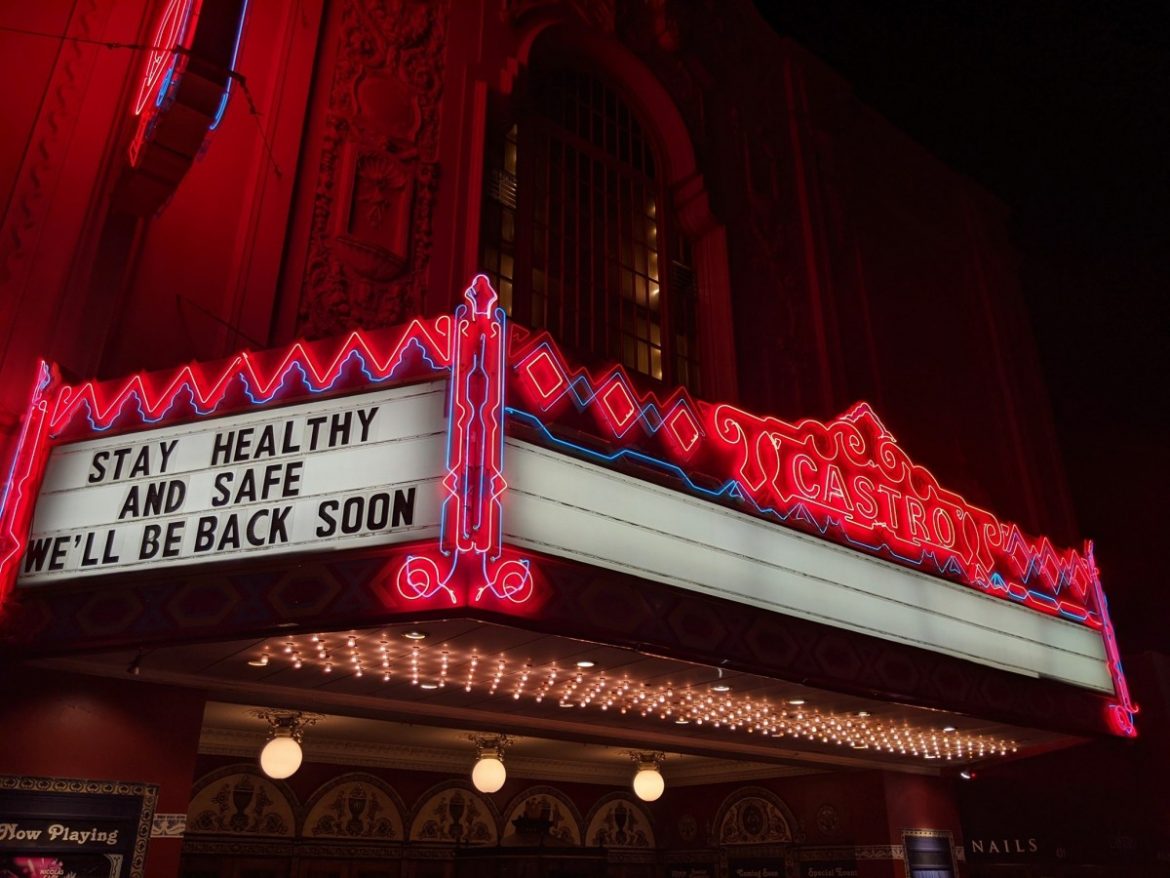 The Castro Theatre, which first opened in 1922, closed all operations during the pandemic and does not have any employees at the moment. (Courtesy of the Castro's Facebook page)

Movie theaters everywhere are staggering under the financial haymaker dealt by the coronavirus pandemic, and San Francisco’s historic, independently owned movie houses are no exception.

The theaters remain indefinitely shuttered in order to avoid super-spreader events — hundreds of people squished up against one another and breathing the same air are hardly conducive to fighting a pandemic — but San Francisco’s historic theaters are still offering the moviegoing experience, sans the traditional venue.

Some theaters are facilitating virtual screenings and popcorn pop-ups complete with merch tables to support the independent theater scene, but one theater is also involved with the first ever Sundance Film Festival screened outside of Utah.

From Thursday to Feb. 2, the Roxie Theater will present a lineup of films including locally made, Bay-centric Sundance movies at the Fort Mason Center for Arts and Culture’s drive-in theater.

The tickets became available to the general public on Jan. 8, but completely sold out by Jan. 11, according to Lex Sloan, the Roxie’s executive director. “Our mission as an independent cinema and arthouse cinema is to support our local filmmakers and help amplify their work and their stories, and so to have the opportunity to do that, through a partnership with Sundance, was just like a win-win, I think for everybody,” Sloan says.

In addition to the upcoming Sundance Film Festival’s Satellite Screens, the Roxie also virtually screens movies, with half of the proceeds from ticket sales going to the theater.

Despite the Roxie’s success with virtual screenings and partnership with the Sundance Film Festival, they’re still losing tens of thousands of dollars a month, according to Sloan because of the pandemic and the closures it necessitated. The Roxie — a non-profit organization — still needs to pay for rent, utilities, garbage and keeping as much of their staff on payroll as possible all while not showing films at the theater.

“We’re finding ways to make the ends meet, but I think probably every movie theater that I know of is operating at significant loss financially, and just trying to stay afloat till we can open our doors again,” Sloan says.

Sloan attributes the Roxie’s survival during the pandemic to the close relationship they’ve cultivated with their audience, leading many loyal patrons to donate to the theater and watch virtual screenings as much as they can.

The Vogue and Balboa theaters, operated by a local organization called CinemaSF, are also operating virtual screenings with the addition of popcorn pop-ups four days a week. The pop-ups also sell beer made from local breweries.

However, the Vogue and Balboa lost 80 percent of their normal income in 2020 because of the pandemic, according to Chloe Ginnever, the theaters’ general manager. While the Vogue tends to air smaller movies, the Balboa hosts the yearly franchise blockbusters such as Star Wars and Marvel films, and the studios’ pivot to streaming from giant companies like Warner Bros. and Disney could harm the Balboa’s income.

“It is a little worrisome that Warner Brothers is releasing all their movies on HBO Max the same day they’re in theaters,” Ginnever says. “That’s definitely going to cut into ticket sales.”

Ginnever adds that she still expects people to see the larger movies in theaters because “honestly, who wants to watch Dune at their house?”

Ginnever is hopeful that the next round of stimulus, which includes money for independent theaters, will help them stay in business.

Many of the city’s historic independent theaters were built in the early 20th century and some of them, such as the Roxie, have stood for more than a hundred years.

“There’s something so cool about the fact that these theaters have been open and operating for, some of them, over 100 years now, and I think that’s really special. There’s a lot of history there,” Ginnever says. “I want to see them open another 100 years.”A streetcar passes the Vogue in Presidio Heights in a vintage photo. The cinema first opened in 1912. (Courtesy of the Vogue’s Facebook page)

Not all theaters are going to survive through the pandemic, but Ginnever said that independent theaters such as the Castro, Roxie, Vogue and Balboa could be more likely to make it because of their followings, and because they’re staffed by people who care about the theaters in more ways than just the bottom line.

The Castro Theatre closed all operations and does not have any employees at the moment. In order to remain viable, the theater would need a large enough audience to accommodate the 1,400-seat venue, according to Steve Nasser, one of the Castro’s owners.

“If the little theaters are going to survive, it’s got to be, I would say, almost always as nonprofits and very creative programming. And even that is not a guarantee of tons of success,” says Gary Parks, a lifelong film and theater enthusiast who helps manage a website dedicated to the Bay’s historic theaters.

Parks, who has tracked every single movie he’s seen in a theater since 1982 — and recently visited a drive-in for the first time since 1979 — said that 2020 was his worst year for watching movies in theaters since he was 3 years old.

While he is excited to return to movie theaters — between the 1990s and 2000s, he went to the movies as often as 40 times a year — he is unconvinced that certain demographic groups like young people or the elderly will return to theaters as enthusiastically as he will, the former because they may get used to streaming movies at home, the latter for safety.

Sloan is more optimistic. She says that she expects a big resurgence in box office sales when movie theaters are once again safe to attend because audiences will be desperate for the communal experience of watching a movie together, one that can’t be replicated with at-home streaming services.

“After Prince passed away, [the Roxie] pulled together a midnight screening of Purple Rain,” Sloan says. “People were, like, all dressed up, and they were in the aisles, dancing and swaying, and it was like a catharsis, you know. It was just more than a movie. It was an experience.”

“It’s about the experience of being alone in a theater together, you know, alone in the darkness theater together with 200 people you don’t know and laughing or crying or shouting or feeling emotion beyond yourself,” she adds.