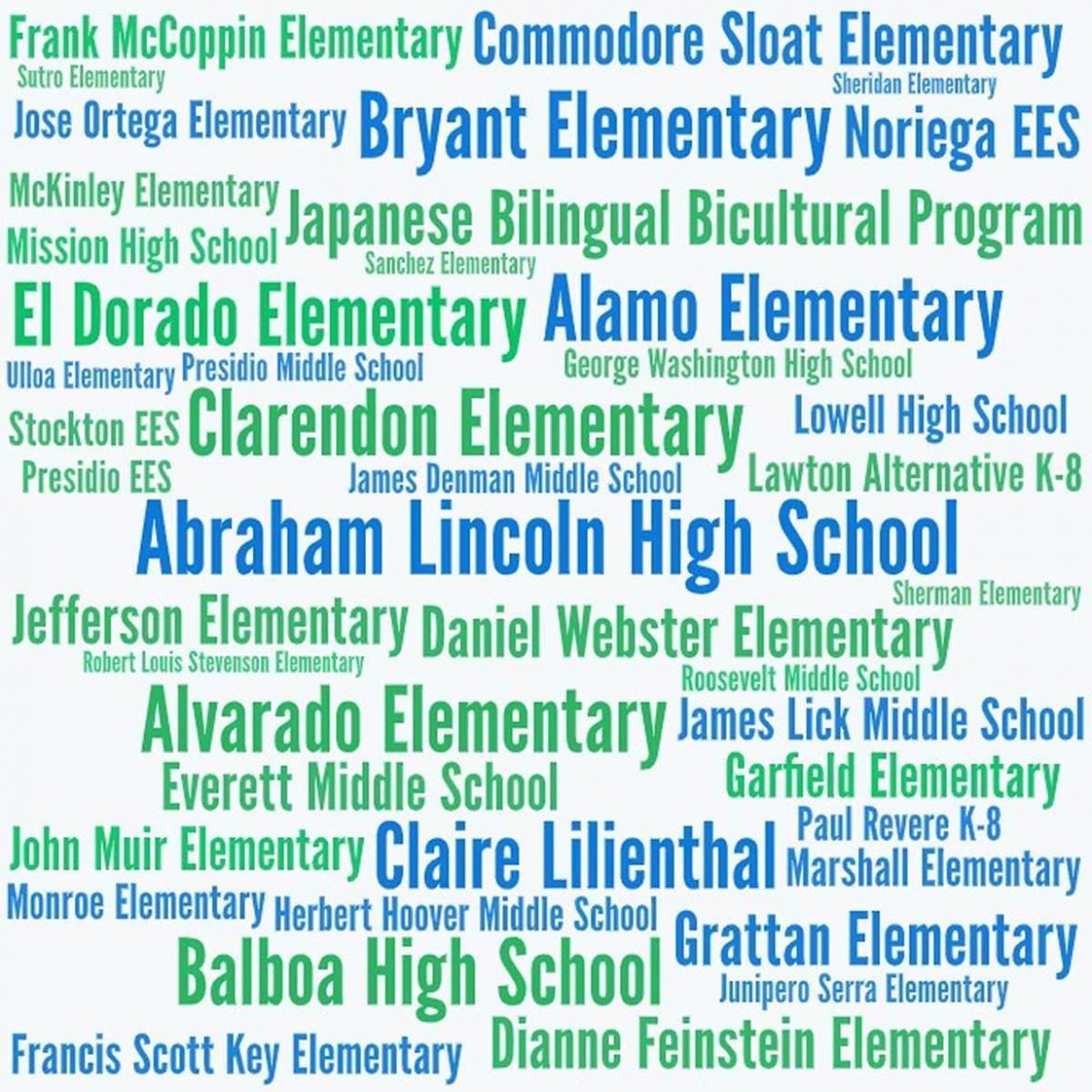 The San Francisco Board of Education has approved moving forward with the process to rename 44 San Francisco Unified School District schools named after controversial figures.

The board’s School Names Advisory Committee will submit possible new school names, with input from parents, teachers and students, to the board in April. After that, the district will then vote on approving the name changes.

Schools up for a name change were chosen by the School Names Advisory Committee, formed back in 2018 by commissioners amid a nationwide movement to strip public institutions of names tied to white supremacy or any other form of oppression. School on the list include Dianne Feinstein Elementary School, Lowell High School, James Lick Middle School, Junipero Serra Elementary School and George Washington High School, among others.

“I go to a school where I’m proud of the name, June Jordan. And another thing I really love about it is that because she was a poet, we get to use her poetry,” Student Commissioner Kathya Correa Almanza said during the meeting. “That being said, I really understand the power of having a school that you’re proud of.”

“Our students are suffering, and we should be talking about getting them in classrooms, getting them mental health support, and getting them the resources they need in this challenging time.”

“Students in our district this summer emailed all commissioners, and specifically Lowell students and Ruth Asawa School of the Arts students, listing demands specific to removing white supremacy and racist culture from their schools,” Commissioner Alison Collins said. “So, it does fall in line with what we’re hearing from students and specifically students of color. It is not fluff, or packaging or performative, it is actually meaningful work.”

Commissioner Mark Sanchez, who initially authored the resolution in 2018, said he would like to see schools named after more recent figures like Michelle Obama and Ruth Bader Ginsburg.

The ongoing process of identifying schools for name changes has drawn criticism, however, from some parents and students, frustrated that schools remain closed due to COVID-19. Mayor London Breed, as well, has called for commissioners to instead focus on reopening schools as distance learning nears lasting an entire year.

“I understand the significance of the name of a school, and a school’s name should instill a feeling of pride in every student that walks through its doors, regardless of their race, religion, or sexual orientation,” Breed said in a statement on Wednesday.

“What I cannot understand is why the School Board is advancing a plan to have all these schools renamed by April, when there isn’t a plan to have our kids back in the classroom by then.”

“Our students are suffering, and we should be talking about getting them in classrooms, getting them mental health support, and getting them the resources they need in this challenging time,” she said. “Let’s bring the same urgency and focus on getting our kids back in the classroom, and then we can have that longer conversation about the future of school names.”

Although the district initially planned to reopen schools in phases starting this month, the district put those plans on hold in December after the district failed to reach a deal with labor unions over COVID-19 safety measures in time.

The post S.F. school board proceeds with plan to rename 44 district campuses by April appeared first on Local News Matters.

One thought on “S.F. school board proceeds with plan to rename 44 district campuses by April”