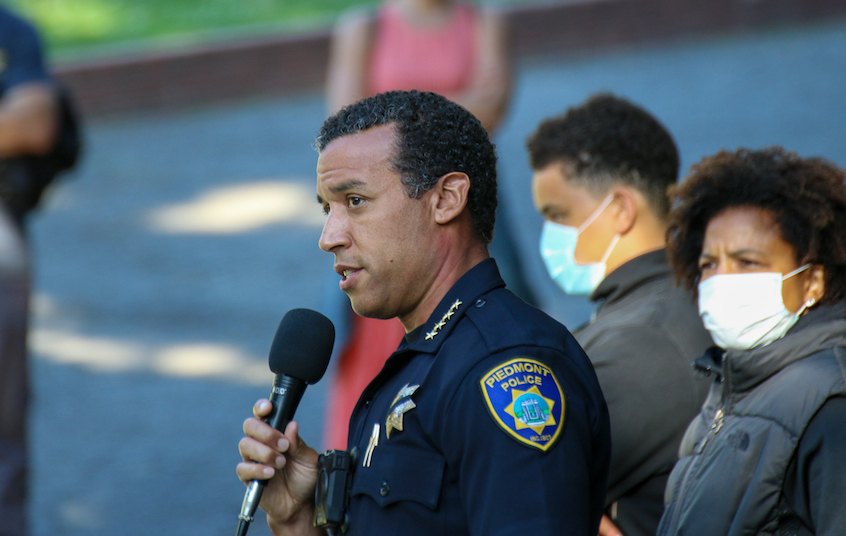 This story was updated Friday morning to reflect the new information that SJPD has paused their search in order to seek more external candidates. Bowers was a member of that department for 18 years until 2014.

Jeremy Bowers, who has been Piedmont’s police chief since November 2016, is a finalist for the open San Jose police chief position, according to the San Jose City Manager’s office.

Bowers, who has been a popular chief in Piedmont, is one of five finalists for that job. A sixth finalist for the San Jose chief position, Minneapolis, Minn. police Chief Medaria Arradondo, withdrew his name from consideration late Tuesday.

San Jose officials said Thursday that they have put a temporary pause on its search for a new chief, as the city seeks more candidates from outside the department.

“Although we have a super strong internal candidate pool, we have fallen short on establishing an external perspective to be included in the community process,” San Jose City Manager Dave Sykes said in a statement Thursday. “Therefore, we have decided to pause the process for two weeks to see if we can shore up the external candidate pool.”

Also, a planned public candidate forum to have featured Bowers and the other hopefuls has been postponed from Saturday to Feb. 13.

Bowers was a member of the San Jose Police Department from 1996 until 2014, advancing from officer to lieutenant during that time. He was hired by the Piedmont Police Department as a captain in September 2014 and was named chief upon the retirement of Rikki Goede.

Four of the six finalists for the San Jose post are currently with that department — Acting Chief David Tindall, deputy chiefs Heather Randol and Anthony Mata, and Captain Jason Ta. All four have at least 20 years’ seniority with the San Jose department.

San Jose is searching for a successor to Eddie Garcia, who announced his retirement in August after serving for four years as that city’s chief, and for 28 years with the San Jose department. Garcia in December was selected as the new chief of the Dallas Police Department.

Bowers declined to answer questions Tuesday morning, but did offer a short statement: “I am honored to be part of the search for San Jose’s next chief of police and look forward to the process,” he said. “My focus remains with the women and men of the Piedmont Police Department, City of Piedmont, and the work we do to serve the community.”

In Piedmont, Bowers has spearheaded the city’s move to expand both its “automatic license plate reader” cameras that focus on vehicle plates to help identify vehicles connected to specific crimes, and its public safety camera system, which capture wider scenes including public sidewalks, parks, street intersections, and other public places.

Bowers has overseen other procedural changes in his department. In December, he announced an agreement between the City of Piedmont and the Alameda County Sheriff’s Office for the S.O. to provide forensic services at major crime scenes, including investigation of shooting involving Piedmont officers and in-custody deaths. In 2020, Piedmont joined other Alameda County cities taking part in the Community Assessment and Transport Team to help law enforcement officers handle calls involving people deemed to need a mental health-oriented response.

Bowers has been praised as a socially progressive chief. In early June, Bowers called the May 25 death of George Floyd at the hands of a Minneapolis police officer — which touched off demonstrations and social unrest across the United States — as  “the latest example of a historical pattern of the misuse of force and larger issues of inequity in our country,” and said his department is in an ongoing analysis of how the it can do its work in a more fair and socially just manner.