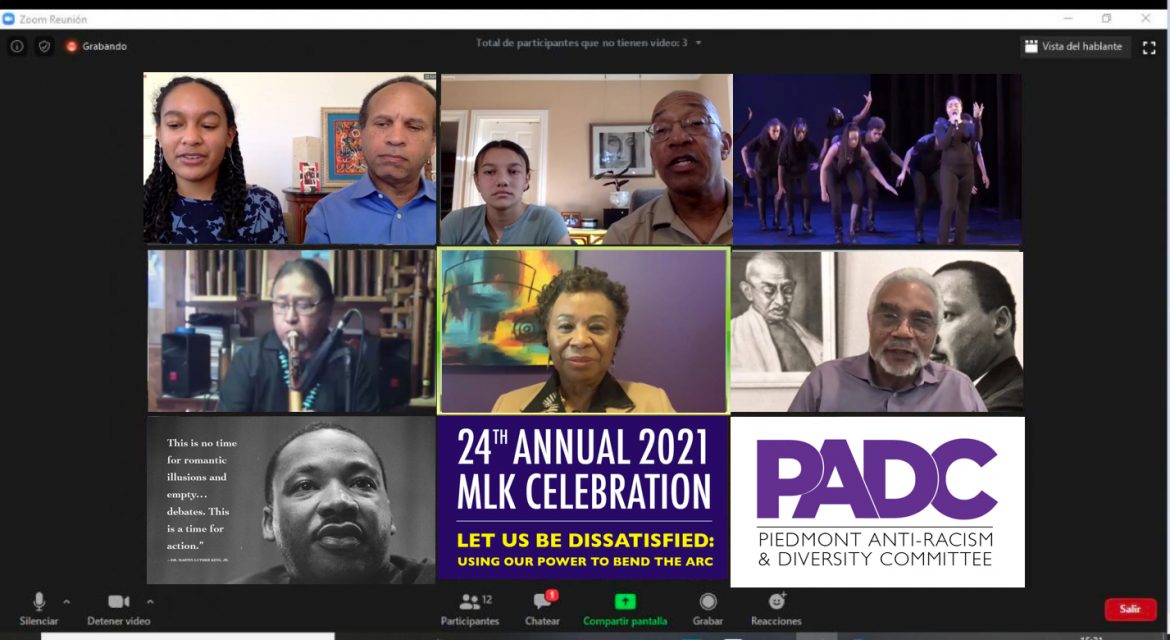 The city of Piedmont and the Piedmont Anti-Racism and Diversity Committee (PADC) celebrated the life and work of Martin Luther King Jr. with an online event on Jan. 18, with several speakers echoing the theme: Let us be dissatisfied.

The theme comes from one of Dr. King’s speeches:

“Let us be dissatisfied until the tragic walls that separate the outer city of wealth and comfort from the inner city of poverty and despair shall be crushed by the battering rams of the forces of justice.”

Dr. Clayborne Carson, a Stanford professor who also serves as the director of the Martin Luther King Jr. Research and Education Institute, was the featured speaker. He delivered his own remarks, then was interviewed by UC Berkeley professor David Thigpen and his daughter August, a junior at Piedmont High School.

“This last year has been a year of hope and a year of despair,” Dr. Carson said.

Carson spoke about building coalitions, reaching kids in less diverse schools and the need for activism to work from the bottom up rather than from the top down. It’s also important for the youth to lead. Older people, he said, may not react to something like the killing of George Floyd by a Minneapolis police officer because they’ve seen it before. Younger people won’t accept that.

He said, “It was young people who said, ‘That’s not my reality. Maybe you’ve seen this before, maybe you’re going to let it go, but I’m not.’”

August Thigpen asked how spreading Dr. King’s message has changed. Dr. Carson answered that online education has been a boon for him.

“Right now you can take a class about Martin Luther King online that I would have taught to a handful of students in a Stanford classroom before,” He said. “Now I can teach a course actually better online and it’s available for free. Every single day were developing new ways of teaching online.”

The program started with welcoming remarks from Lois Corrin, a founder of the Piedmont MLK Celebration which is hosted annually by the Piedmont Appreciating Diversity . She shared a story of how her father went to Morehouse College with Dr. King and was on the debate team with him.

Then, Vince Redhouse played the native flute and read a prayer form his home in Washington state.

Richard Turner of PADC appeared with his daughter Anjuli, who is a senior at Piedmont High. Richard Turner recalled Dr. King’s “Beyond Vietnam” speech as one of his most controversial. Turner said it was “Dr. King reclaiming his calling as a minister of the social gospel. From early on, King saw his role as broader than civil rights.”

Youth from Oakland’s Destiny Arts Center presented two performances — “What color is your freedom?” and “#standwithblackyouth,” recorded at a protest in 2020.

Technical difficulties prevented Dr. Shakti Butler from presenting her portion of the program. Jennifer Long, president of the PADC, and her son Taj Riebel, a junior at Bishop O’Dowd, concluded the main event. A video featuring the final words of Rep. John Lewis voiced by Morgan Freeman was then played.

After the main program, several community workshops were held, including the Black Student Union discussing the legacy of Dr. King and “Nice White Parents: A Podcast Community Discussion.”