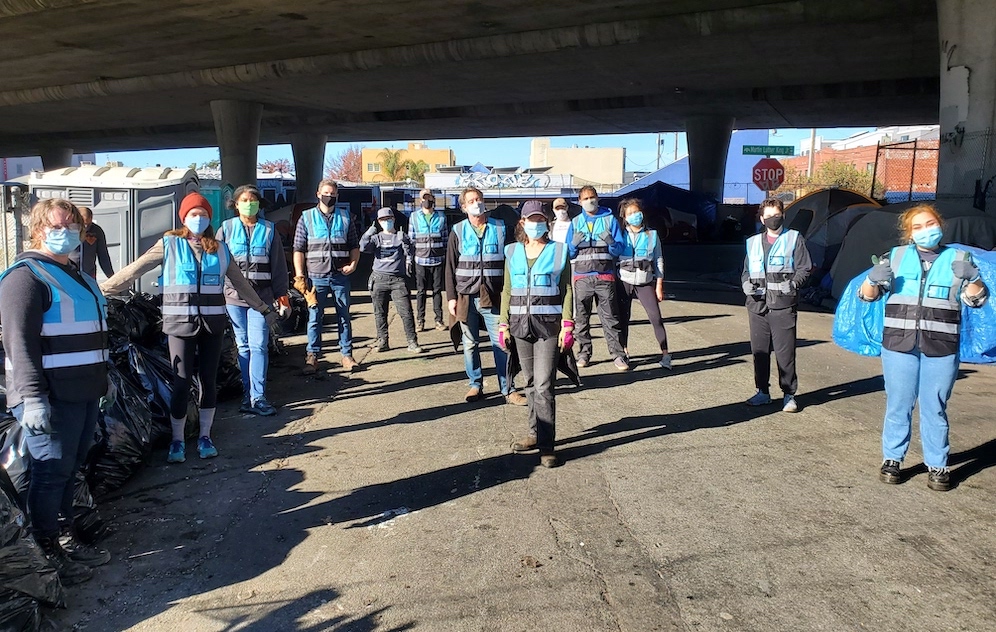 Urban Park Cleanup was started by Oakland native Vincent Ray Williams III (second from left in red hat) and has since grown to some 30 volunteers who are out every weekend, weather permitting

The Urban Park Cleanup effort might sound like a city-funded program, but it’s the work of a man who had been on the streets himself and decided to address the trash accumulating at the homeless camps dotted around Oakland.

Oakland native Vincent Ray Williams III initially took on the daunting task of clearing trash as an unheralded one-man effort to show compassion to the people living in circumstances he was well familiar with, having been among their ranks. It has since grown to some 30 volunteers who are out every weekend, as weather permits.

“It came about because I saw a necessity in the community,” Williams, 32, said in an interview. “It’s more than cleaning trash. A whole segment of the population has been disregarded.”

Many who pass by lament the conditions of the people living in the lines of tents along and around Interstate 980 in Oakland and wish the city, already starved for resources and facing a massive budget shortfall, would do something.

People began to notice the work being done by Williams and his small-but-growing band of volunteers, including John and Lynne Bosche of Piedmont, who became acquainted because of a chance encounter last October.

“My husband was out on a bike ride and was riding on Telegraph Avenue. It was distressing to him to see what had happened with the homeless situation and the degrading conditions,” Lynne Bosche said. “He saw people cleaning up one of the sites and Vincent came over and started talking to him.”

John Bosche, an environmental engineer, was impressed with the professional level of safety equipment used by the volunteers.

“My husband told me about it and gave me his card,” Lynne Bosche said. “He really knows how to do cleanups safely. I’m grateful for that because there can be some pretty nasty stuff. It’s not a casual thing. He has plans in place.”

From a one-man-band to a whole orchestra

As the Urban Park Cleanup grew, so did the costs for equipment for workers and trash removal, leading to a GoFundMe (learn MORE) being established in October.

“Someone had convinced me to set one up because I was working 9-to-5 and putting money into this work,” Williams said. “A friend suggested posting what I’m doing on social media. A family member said I should try to get community support.”

Urban Park Cleanup also has a Facebook page (also see below), where upcoming work days and their results are announced.

The immediate need is for personal protective equipment, including hazmat coverings, impenetrable gloves, pickers, reflective vests and lots of refuse bags, of course. The long-term goal is to buy a pickup truck to haul equipment in and take the trash out.

Safety is paramount because the debris can contain human waste, syringes and other hazardous waste. Williams is certified in OSHA hazmat disposal and has worked in construction, which stresses safety and he applies that to the cleanup effort. “Both my expertise and having been homeless, I knew what we’re working with,” he said, explaining how volunteers are properly instructed and equipped.

“We get everyone together and give them our liability form, Williams said. “If they don’t sign they don’t work.”

Each group of volunteers has a lead person who can answer and address safety issues.

“It’s imperative that people in the community who come to help have they equipment they need to do the work,” Williams said.

Urban Park Cleanup, which gets no support from the city or county, has to date received 134 donations totaling more than $12,000 from the GoFundMe, which has a goal of $30,000.

From a troubled past, compassion showed the way forward

John and Lynne Bosche have been among the early and ongoing supporters after talking to Williams and learning more about his background and what led to starting the effort.

“His story for a 32-year-old is pretty darn dramatic. I asked him harder questions about his past, Lynne Bosche said, adding that Williams was open about it.

“He had a rough childhood, was tossed around in foster and group homes, juvenile detention and has been in prison at least twice, once as a youth, once as an adult,” she said.

Williams already was HIV positive when he was born in Oakland. He was raised in poverty and said he was largely homeless from ages 9 to 24.

“At times I was on the street doing drugs,” he said. “There were times I had no home, times I couldn’t get access to community resources.”

Because of the circumstances of his younger years “He was very angry,” Bosche said. “He said his life changed when a sister he had never met came to visit when he was on his way to prison.”

Asked what enabled him to change his outlook and perspective, Williams said, “Somebody showed me compassion. “Someone showed up, asked me how I was doing. They never judged me about how I was living, they wanted to know what the problem was and how they could help.”

Williams now uses that same approach for the people he meets in the camps.

“The main reason I do what I do and organize this is because I have a different perspective,” he said. “I have been homeless most of my life. I saw people suffering the most, especially during the pandemic, who were unhoused. I knew people who had it even worse than what I have experienced.”

His interactions often involve more than the cleanup work, which itself is deeply appreciated by those living there.

“There is a huge necessity for compassion-based work,” Williams said. “I had been going down to 23rd and MLK and they got to know me, got to know my face, got comfortable asking me about issues.”

He recounted talking to a young woman who had been clean from drugs for two days.  “She said ‘I don’t want to be on the streets anymore. What do you do besides clean trash,” he recalled, adding that he was able to help get her into a substance abuse program.”

Lynne Bosche, who once worked as a court-appointed special advocate, said that “It’s quite impressive to see his attention to everyone around him. They see him as a leader. He’s very in touch with what’s going on having been homeless himself. He’s not afraid of it. He has the ability to understand and take it on.”

The accumulation of trash

Beforehand, “I went and you couldn’t imagine the heaps of trash,” Williams said, adding that the city hauls refuse from the location monthly, but only near the street.

“You can tell a lot of the trash has been there for months and months because nobody wants to go back that deep,” he said. “This is where we’re going to go and pull it all out because the city doesn’t have the resources.”

Williams noted that much, maybe most, of trash is not generated by the people living there, but by outsiders.

“A great deal is generated by movers and community members who don’t want to pay dumping fees. I’ve seen it with my own eyes,” he said.

Loads of furniture, mattresses, large appliances and such are dumped at night.

“One guy in a tent at 23rd and MLK was surrounded by a fortress of furniture,” Williams said. “He said people come here and just dump stuff at the corner everyday and said ‘I have to push it aside so I don’t have rats in my house.’

“Tent people have a responsibility, but it’s not all their doing,” Williams said. “When you have nothing else in the world you want to take care of what you got.”

A collective responsibility to make a difference

Lynne Bosche said involvement in addressing conditions at the camps extends to the greater community.

“We all live so much of our lives in Oakland. I think it’s something Piedmonters would want to contribute to,” she said. “I think I’m going to continue to be involved in some way … continue to make small donations.”

Williams appreciates assistance in any form to keep the effort going.

“I want the community to know the only reason we’re able to do what we do is because the community is willing to show up and take part,” he said. “Everybody has a skill set that can help the community. I’m grateful for people showing up, but even if some people don’t have the capacity for clearing trash, they may have the means for a financial donation, help with clothes and equipment, or something to offer the community we’re working with.”

“He’s someone who really got it,” Lynne Bosche said. “He seems to be one of those people doing good things for the right reasons. Vincent, having a dream and passion, has a real chance to do something to make him proud of himself. He’s figured out things in Oakland that can make a difference.” 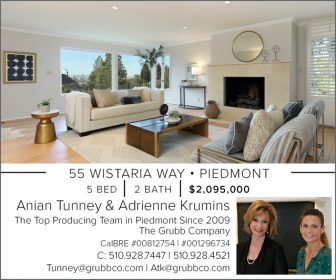 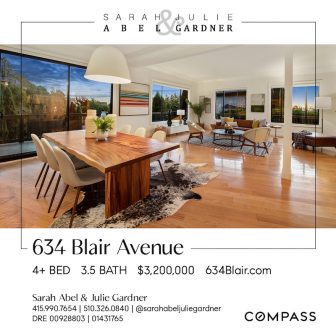