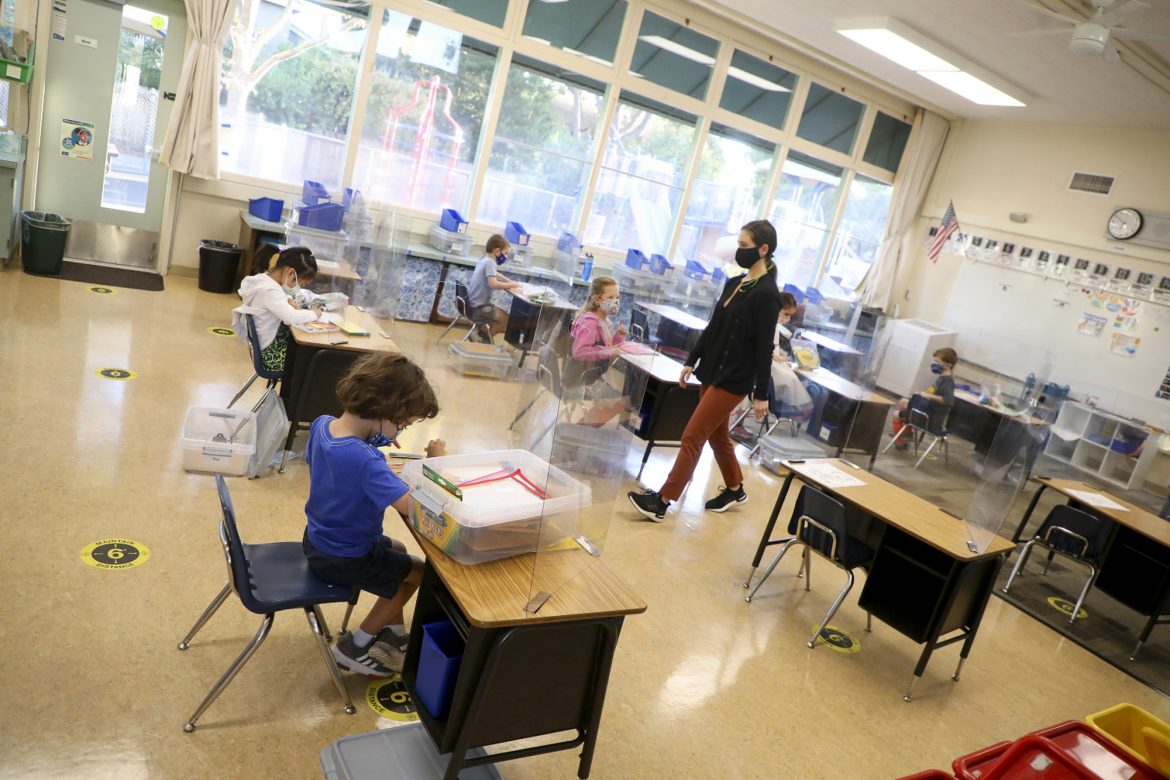 Some school officials say a proposal touted by Gov. Gavin Newsom as financial assistance to reopen California campuses attaches strings that would strain their budgets.

In his bid to get California school campuses back open, Gov. Gavin Newsom proposed giving extra money to schools that managed to open by a certain date.

But the $2 billion in grant money would come attached with strings that some districts say would mean paying more than if they didn’t get the money in the first place. That’s because Newsom’s proposal — and new state guidance, the first since last summer — calls for vastly increased testing of school staff and students, which the schools would have to pay for.

The governor’s “Safe Schools for All Plan,” first released Dec. 30, aims to incentivize schools to offer in-person learning by offering between $450 and $700 in per-pupil grant funding if the schools reopen for their youngest students by Feb. 16.

In order to receive extra state funding, districts would have to test staff and students for coronavirus periodically, according to trailer bill language. The frequency of the testing would depend on which of the state’s four color-coded reopening tiers the schools reside in.

For example, schools in the state’s purple and red tiers are now suggested to test their employees and students every two weeks. For schools in especially hard-hit counties with case rates higher than 14 positive cases per 100,000 — at this point, most schools — the guidance calls for testing staff and students on a weekly basis, per the California Department of Public Health. The guidance does not suggest specific testing timing for schools in the orange or yellow tiers.

Schools are not mandated to follow the state’s testing guidance if they don’t plan to seek financial support through Newsom’s proposed $2 billion fund for school reopenings. But the testing strings attached to state assistance have garnered criticism from school officials and advocates toward a reopening plan that had already attracted pushback from large, urban districts and teachers unions.

Critics of the governor’s reopening plan say that requiring more frequent testing — and that students be included — adds more to reopening costs than would be recuperated by the $2 billion fund. School officials have also raised concerns about the tight deadlines in order to qualify for the full per-pupil amounts, as well as the fact that the money is coming out of the Proposition 98 pot of funds already meant for K-12 schools and community colleges.

“I don’t know if that grant money was going to be enough for everything that would be required, including the testing schedule,” said Al Mijares, the Orange County district superintendent. “It’s made it difficult for people to immediately jump at this with enthusiasm and grab it with gusto and run.”

“The difficulty of implementing the proposed testing cadence prior to the proposed deadlines cannot be understated,” read the letter from school advocates, which included the California School Boards Association and California County School Superintendents Educational Services Association.

“Because COVID-19 testing for students and staff is central to the reopening plan, it is critical that schools actually have the capacity to operationalize and pay for the new testing requirements,” the letter said. “Currently, the vast majority of (school districts) do not believe such a path exists.”

Jesse Melgar, a spokesman for Newsom, said in a statement Tuesday that the governor planned to “continue working with legislators and stakeholders to advance this proposal in the coming weeks.”

“We appreciate that the letter acknowledges the importance of our Safe Schools for All Plan and the value of returning to in-person instruction in a manner that is safe for students and staff – even as they pose questions about the $2 billion budget proposal,” Melgar said.

Most public schools that reopened last fall did not include students in their surveillance testing strategies, and some reopened with minimal or no surveillance testing. The testing issue had vexed many local districts grappling with questions surrounding cost, availability and how often to test employees. Earlier state guidance on reopening schools suggested districts test their staff once every two months. It did not issue recommendations for testing students.

As part of the governor’s push to reopen schools, the state is allowing schools to piggyback on the state’s contract with Valencia Branch Laboratory for discounted testing. Also, the state has vowed to offer more technical support for schools by creating a new team dedicated to helping schools develop safety plans and launching a new website to troubleshoot their questions.

Still, for some school districts, the costs associated with required weekly or biweekly testing for employees and students outweigh the benefit of pursuing the $450 per-student grants.

Marian Kim-Phelps, superintendent of San Diego County’s Poway Unified, said Newsom’s reopening plan could actually cost the district of 36,000 students money if it decided to apply for the grants.

In a Thursday school board meeting hours after the state released its new guidance, Phelps explained to her board why it wouldn’t be worth the effort to pursue the grant funding for Poway, one of the largest districts in California to offer in-person instruction. Superintendents in San Diego County had estimated that it costs about $40 million to test all teachers in the county once. By that estimate, Phelps said, the grant funding they’d receive would pay for only eight rounds of testing for all teachers, not including students.

“The math doesn’t even pan out. So, districts would be stuck with this bill on the back end of something that nobody could afford,” Phelps said.

All K-12 students attending school in person are now required to wear masks. While campuses are allowed to reopen for students in kindergarten through sixth grade so long as their county has less than 25 positive cases per 100,000, schools in California cannot physically reopen for grades 7-12 until their county moves out of the purple tier for five days.

The state will now track and publish data on school cases and reopened campuses, requiring school districts to report whether they are offering in-person instruction, and in what capacity, starting next week.

Sara Noguchi, superintendent of Modesto City Schools in the Central Valley, said she plans to pursue the state’s grant funding for reopening, though said she’s sought more clarification from public-health officials over how often staff and students would have to be tested.

Noguchi said the largest school system in Stanislaus County will be able to meet the Feb. 1 deadline for full grant funding because it began offering in-person learning for elementary students in November after applying for now-defunct reopening waivers. Many of the elementary waiver requirements overlap with those for acquiring grant funding.

“It took us weeks and weeks to work on an MOU that we negotiated to open up our elementary schools,” Noguchi said.

“If you weren’t in a district that applied for the waiver, it would be very difficult to put all of this together by February 1.”