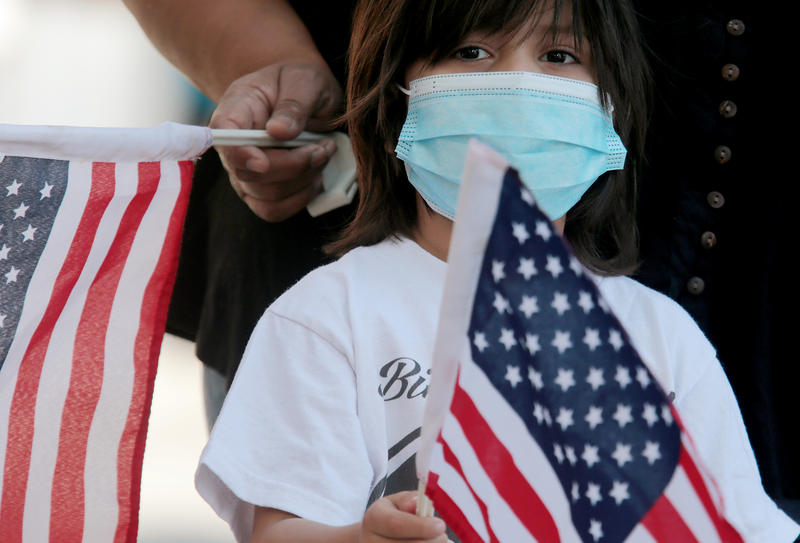 August 26, 2020 - Los Angeles, California, United States: Taylor Situmul, 5, holds a small American flag during a demonstration outside the L.A. Federal Detention Center. Situmul was separated from his parents by immigration authorities earlier this year. He was held in custody, separated from his family, for 12 days. Demonstrators called on Latino voters to reject the re-election of President Donald Trump or any Republican candidate running for public office because of their defiance of federal court orders to release immigrant children separated from their parents. Protesters also denounced Trump's refusal to allow new applicants for DACA, a program that protects the rights of people brought to the U.S. as children. (Luis Sinco / Los Angeles Times/Polaris)

A path to citizenship for millions of undocumented immigrants announced Wednesday by President Joe Biden could benefit hundreds of thousands of California children, alleviating anxiety and fear they, their parents or other family members could be deported.

Biden’s proposed legislation offering an eight-year path to citizenship for most undocumented immigrants and a shorter, three-year path for those who already have been granted Deferred Action for Childhood Arrivals (DACA), marks a seismic pivot away from former President Donald Trump’s immigration policies, which included prioritizing all undocumented immigrants for detention and deportation and rescinding DACA, a temporary protection program for some immigrants who arrived in the U.S. as children.

Biden released his plan a few hours after he was inaugurated.

“The last four years have been traumatizing for our students where we saw a dramatic and devastating spike in ICE arrests of parents in our communities, even outside of school campuses, on their way to taking their children to school. If Biden’s measures are approved, we will hear a huge sigh of relief across the country, and especially here in California,” said Amie Scully, founder and CEO of Students Without Limits, an organization that partners with schools in the San Diego area to help undocumented students get legal services and go to college.

Those who have already received temporary legal status through programs such as DACA, and some farm workers, would be able to apply for permanent residency immediately. About 184,000 DACA recipients live in California. Biden’s legislation would also slash wait times for visas for family members of U.S. citizens and permanent residents who are outside the U.S. It would also eliminate a provision in place since 1996 that bars many undocumented immigrants from the country for three years, if they have been in the U.S. for more than six months, and for 10 years, if they have been in the country for more than a year. That makes it difficult for many undocumented immigrants to become permanent residents, even if they have a U.S. citizen spouse or other close family member. The bill also strengthens border security with new technology to screen people crossing the border, among other provisions.

Biden also signed executive orders undoing some of Trump’s legacy, including one that will strengthen and continue the DACA program and another to end Trump’s enforcement policies that made all undocumented immigrants a priority for deportation.

“For all of us immigrants, this represents a little hope,” said Maria Jimenez, an immigrant from Mexico who has lived in California for 19 years. “We could do many things that we haven’t been able to because our wings have been clipped.”

Jimenez and her husband are both undocumented. Their six children, ages 5 to 17, were born in California and are U.S. citizens.

“Our children watch. They suffer. It affects them emotionally,” Jimenez said. She said four years ago, when Trump became president and ramped up detentions, one of her daughters became very anxious, afraid that her parents would be detained and deported. “She would tell me, ‘Don’t go outside,’” Jimenez said. “She would bite her nails. The stress even began affecting her academically.” A survey conducted by the UCLA Civil Rights Project found that fear of immigration enforcement affects school attendance and performance.

Biden’s plans were hailed and applauded by California school district officials and others who work with undocumented children.

“Kids live with perpetual fear and anxiety that their parents may not be home when they return from school, or that they themselves may be deported and torn from their communities. This is not new with the Trump administration but the fear certainly intensified,” said Etel Calles, outreach and communications manager of the Immigrant Family Defense Fund, an organization based in Oakland that raises money to help undocumented students and families facing deportation. “A path to citizenship would give families the security to live in freedom, but this path must be open to all and not carve out and divide our communities.”

Austin Beutner, superintendent of the Los Angeles Unified School District, said in a statement, “We are grateful to President Biden for his swift action on immigration, a matter that impacts so many families in our school community. Many of these undocumented immigrants and Dreamers have been on the front lines during this pandemic, caring for the sick, feeding the hungry and providing children with an education. Now is the time to recognize their contributions by helping them become citizens of the place they call home.”

Chris Eftychiou, spokesman for the Long Beach Unified School District, said when Trump ended DACA, it affected many students in the district.

“Our role as public school educators is to welcome and serve all students who arrive at the schoolhouse door, regardless of their situation in life,” Eftychiou said. “Our pledge is to continue serving these students and their families, and we welcome any legislation that protects our children, preserves their family unit and gives them a chance to participate fully in our society without unnecessary fear and uncertainty about their right to be here.”

Xanthi Pinkerton, spokeswoman for Elk Grove Unified School District, said, “We welcome our new president and hope that newly proposed federal legislation such as that for immigrants will support and foster improved child development, learning and growth and greater family and community engagement.”

The bill is certain to face opposition from many Republicans. Previous attempts at comprehensive immigration reform, with a path to citizenship for some undocumented immigrants, have failed to pass Congress. Under President Barack Obama, a bill passed the Senate in 2013, but died in the House of Representatives, at that time controlled by Republicans. Already, some Republicans have spoken out against Biden’s plan. Sen. Marco Rubio, R-FLA., has been quoted by several news outlets as saying, “There are many issues I think we can work cooperatively with President-elect Biden, but a blanket amnesty for people who are here unlawfully isn’t going to be one of them.”