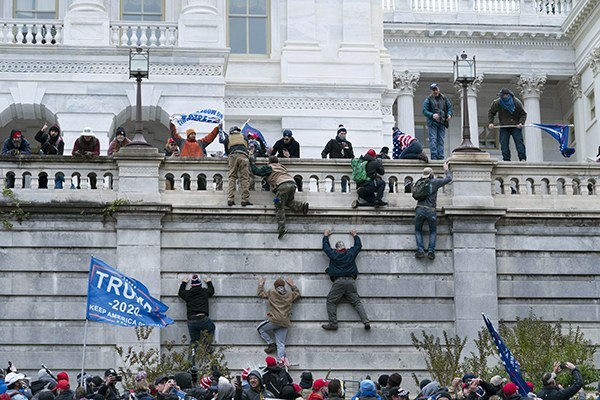 As a violent mob of President Donald Trump’s supporters stormed the U.S. Capitol on Wednesday — temporarily preventing Congress from certifying the Electoral College votes to confirm President-elect Joe Biden’s victory — protests broke out at California’s Capitol building in Sacramento and in cities including Los Angeles, Huntington Beach and Bakersfield.

The unrest led Gov. Gavin Newsom to cancel a Wednesday press conference and condemn the violent events that forced lawmakers in Washington to remain under lockdown for hours as gunshots rang out and gas masks were dispersed. One demonstrator — a San Diego woman — was fatally shot inside the U.S. Capitol.

The response of California’s congressional delegation — 42 Democrats and 11 Republicans — was mixed. Numerous Democratic members called for Trump to be impeached. Virtually every representative denounced the attack on the Capitol, with the notable exception of Rep. Devin Nunes. The Tulare Republican, to whom Trump awarded the Presidential Medal of Freedom on Monday, did not issue a public statement. GOP Minority Leader Kevin McCarthy of Bakersfield described Wednesday’s events as “unacceptable and un-American,” even as he expressed doubts about the integrity of the November election.

Many of California’s state assemblymembers and senators also censured the Capitol attack, though Senate Republican Leader Shannon Grove, in a since-deleted tweet that she later said was sent while incomplete, alleged that the demonstrators were not Trump supporters but members of Antifa. She later condemned the mob’s actions as “unacceptable and un-American.”

Before the Capitol attack, two of California’s 11 congressional Republicans — Reps. Tom McClintock and Young Kim — had pledged to vote to uphold the Electoral College votes. But when the House voted late Wednesday night on whether to overturn Arizona’s slate of electoral votes, McClintock was the only California Republican to vote against doing so. In favor were Reps. McCarthy, Nunes, Ken Calvert, Mike Garcia, Darrell Issa, Doug LaMalfa and Jay Obernolte. Reps. Kim and Michelle Steel abstained. (Rep.-elect David Valadao couldn’t vote; due to a recent positive COVID test, he hasn’t yet been sworn in.)