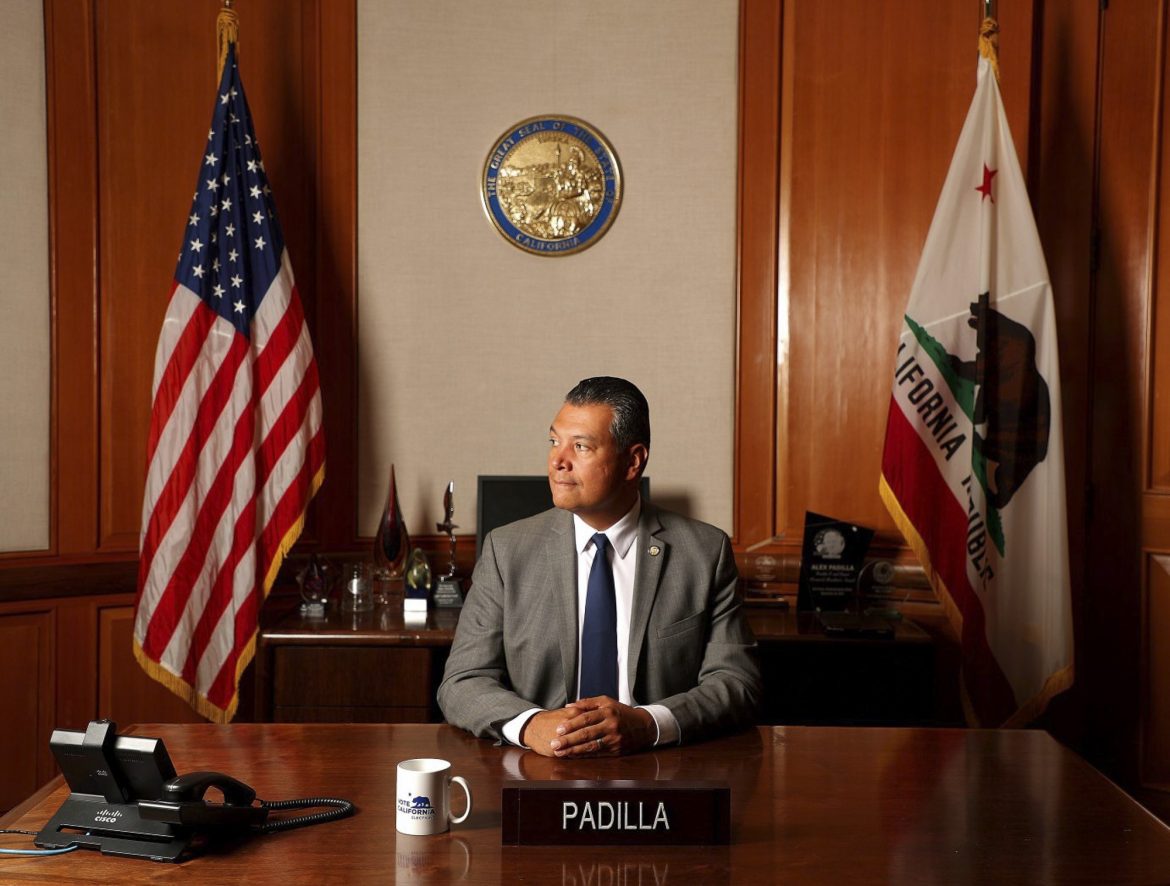 As he’s sworn in today by Vice President Kamala Harris to take her old seat, California’s newest senator says the outgoing president and some fellow senators must be held accountable for the deadly siege of the Capitol.

Today’s presidential inauguration of Joe Biden sets off a spate of historic firsts that are reshaping Democratic politics in California. Kamala Harris, California’s former senator, will be sworn in as the first female vice president. Hours later, she’s scheduled to administer the oath of office to her replacement, Alex Padilla, the outgoing secretary of state who will become the first Latino to represent California in the United States Senate.

The changing of the guard comes as the nation is reeling from a deadly pandemic and the aftermath of the second impeachment of outgoing President Donald Trump. It’s a lot for a new senator to step into.

Amid heightened security, even plans for his swearing-in ceremony have been fluid, Padilla said:

“Here’s my game plan, to be honest. I’ll wake up in the morning, put on a suit. Have a cup of coffee in one hand, and a Bible in the other. And I’m just going to wait for the phone call.”

Conducting business in a conference room near the Democratic National Committee’s headquarters because his Capitol office isn’t yet available to him, Padilla talked to CalMatters about his new job.  This interview has been lightly condensed for clarity.

Q: It’s been less than a month since Governor Newsom announced he would appoint you to replace Harris, but so much has changed in that short time. Democrats won two Senate races in Georgia, giving the party control of the Senate. And the House impeached President Trump for inciting the January 6 attack on the Capitol. How will these developments change your work as a senator?

A: I will try my best to stay focused. A lot of big issues to work on, but none more critical and urgent than the COVID-19 pandemic. A lot of what’s transpired since the announcement, you’re absolutely right, it just keeps adding to the workload. So as I am entering the United States Senate, there’s two oaths that I’ll be administered. One is being sworn in as a member of the Senate, and the other is being sworn in as a juror.

A: I think it’s more than clear his actions, his statements in the public domain — he did just have a huge role in the rebellion and insurrection of January 6th. He’s been fanning those flames for four years.

A: I will respect the process of the hearing in the Senate, as a juror. But Donald Trump, and a lot of his enablers, must be held accountable.

Q: What about Senators Ted Cruz and Josh Hawley — would you vote to censure or expel them for objecting to the Electoral College votes?

A: Yes, I think they have to be held accountable. Every member of the Senate takes an oath to uphold and defend the Constitution of the United States, not to uphold conspiracy theories and baseless lies about election results. And they had fatal consequences on January 6. We can’t lose sight of it. Yes, we have a lot of official work to do but we can’t lose sight of the important accountability to defend our democracy.

Q: So, do you think censure or expulsion is the right answer for them?

A: I think the nation would be best served if they were no longer in the Senate. There are several procedures for that. You know, their hometown papers in their own respective states have called for their resignations, and that says a lot as well.

Q: Wow, that’s a lot to step into that you weren’t expecting a month ago.

Q: What does the slim Democratic majority mean for your policy goals? And are there policies we have in California that you’d like to help pass for the whole nation?

A: Absolutely. It may be a razor-thin majority, but it’s a majority nonetheless. And the urgency by which a lot of these issues need to be addressed is absolutely there, starting with COVID. We can’t rest on our laurels just because there’s vaccines that have been approved. We clearly have manufacturing and production challenges to overcome. More distribution, better distribution plans to put in place across the country. … The other side of COVID response is economic. The $2,000 direct assistance to families across the country should have been done yesterday. The sooner we get that done, the better. And I want to be clear that it’s not a stimulus check in my opinion. It’s a survival check.

In addition to that, I think there’s many ways in which my California experience lends itself to the U.S. Senate. We talk about the imminent threat that is climate change. When I was in the state Senate for six years I chaired the committee that oversaw energy, so I was deeply involved in the crafting of California’s renewable energy goals. That directly translates to climate discussions in Congress. Look at my experience the last six years in the elections world. Election security is going to continue to be a hot topic for Congress. We can’t take our eye off the ball on the multiple threats — cyber and otherwise — to the integrity of our free and fair elections.

Q: What do you think about Biden’s proposal for immigration reform? Is eight years fast enough for a pathway to citizenship?

A: The proposal overall is very, very encouraging. Would I like to see five years as opposed to eight? Absolutely….And for that matter, a more affordable naturalization application fee. The fees have gone up too much, too soon in the last four years. But there’s other elements too. How to provide not just protections to Dreamers by reversing the Trump executive order for DACA, (but also) the parallel program that extends to the families of Dreamers. How to make sure we finish reuniting families that were separated at the border under the Trump administration? And how do we piece back together a humane asylum system that was decimated by Trump? So there’s a lot of elements in the comprehensive immigration reform plan that I’m eager to be a strong voice in. Because no state has more at stake in getting this done than the state of California.

Q: In the run-up to your appointment by Governor Newsom, so much of the public debate was about the ethnic and gender identities of those who might replace Senator Harris. (Some advocates said the seat should go to a Latino to represent the state’s largest ethnic group. Others said Newsom should appoint a Black woman because Harris was the only one in the Senate.) Did that surprise you?

A: Not completely. California’s rich diversity was among a number of considerations, and hopefully a key consideration, for Governor Newsom to take into account.

Q: But did the focus on the origin stories of the possible future senators take away from a discussion of what kind of qualifications voters might want in their senator? Or what their ideology and belief systems are, or what they could accomplish for the state?

A: I don’t think so. That’s one of the beautiful things about our democracy. We all bring our perspective, our life journey, to the process. I know the governor must have weighed a number of considerations, diversity being an important one, but just one. I’m honored and humbled by the selection. And I think in large part, it also is the result of my 20 years of public service, my experience, my track record at the municipal level, in the state Legislature and in the last six years as California’s chief elections officer.

Q: Can you give a sense of what the interview process with Newsom was like? What kinds of things did he ask about and want to explore with you?

A: It really spanned from elections, to health care, to seismic safety sudden warning systems, to higher education. There was a lot.

Q: Your first job in government was as an aide to Senator Dianne Feinstein. Is there anything you learned from her that you’re reflecting on now that you’re that you’re beginning your own position as a senator?

A: Her effectiveness on issues like the assault weapons ban early in her tenure as a senator, and some of the major environmental protection deals that she’s shepherded through, from the desert to the redwoods and everywhere in between. Her courage in releasing the torture memo from the intelligence community. I thought that was bold and brave. So I learned a lot through observation. Looking forward to working alongside her. The narrative is not lost on me: I used to be a field representative for her once upon a time, and now we’re going to be colleagues. But I also look forward to bringing my own perspective and life experience to the deliberations of the United States Senate.

Q: Have you seen Senator Feinstein since you’ve been in Washington? (Feinstein told reporters Tuesday that she thought Sens. Cruz and Hawley had the right to object to Biden’s victory when the Senate certified Electoral College results following the Jan. 6 riot.)

A: I have not seen her since I arrived in Washington. We’ve talked by phone about weekly.