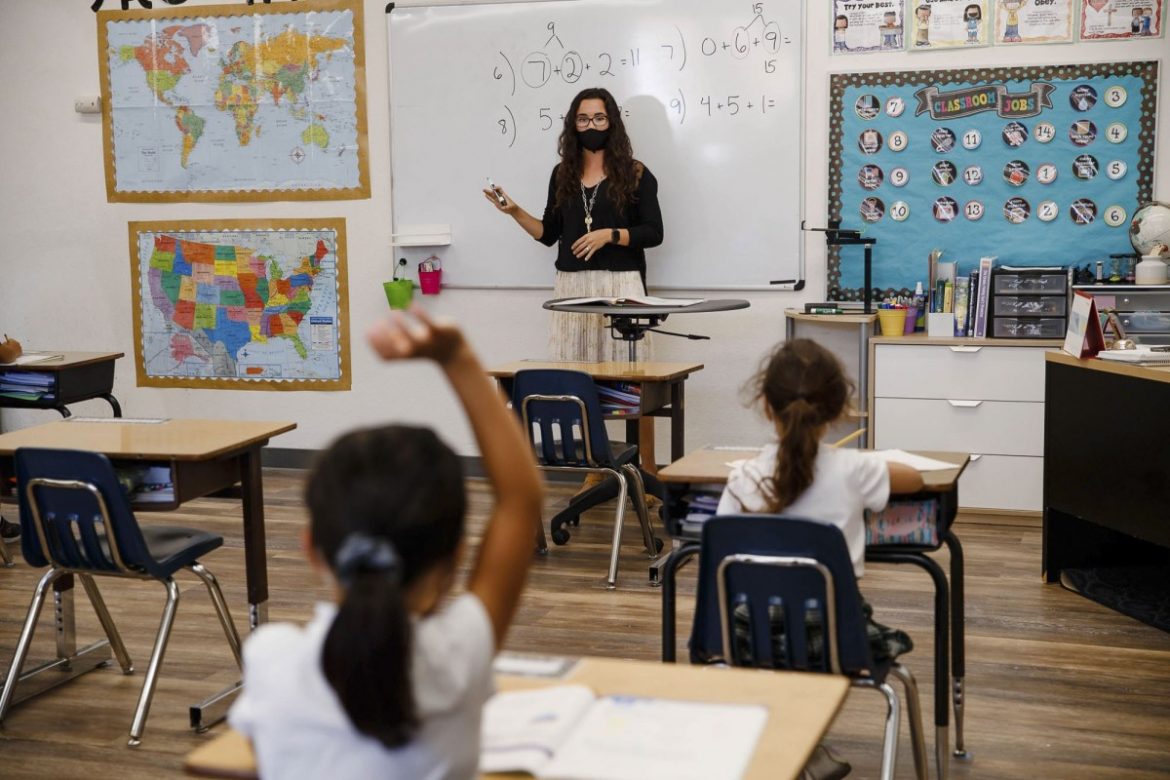 The governor’s push to reopen schools, though, comes as many of the state’s large, urban districts have delayed or scaled back plans for in-person learning amid the state’s worst surge in coronavirus cases since the pandemic initially closed schools almost a year ago.

School districts will also be under tight deadlines if they wish to receive the full $450 to $750 per student in grant funding. In order to get the full amounts, districts will have to submit to the state by Feb. 1 plans outlining the safety and testing measures for in-person learning with approval by their local employee unions, according to trailer bill language describing the program.

Schools then must offer in-person instruction to students in transitional kindergarten through second, as well as students most at risk of disengaging from school, by Feb. 16, followed by third- through sixth-graders by March 15.

Schools — and the governor — are under intense pressure from parents and communities to reopen campuses as they near the anniversary of their initial March 13 closures. In California, reopening schools has been left to local superintendents, schools boards and employee unions, resulting in a patchwork of school reopenings that’s created a divide between private and public schools.

Newsom also is putting the Legislature under a time crunch by asking lawmakers to push through his proposed school-reopening grants in the next two weeks and the $4.6 billion learning loss plan by end of March, ahead of the traditional summer deadlines.

Aided by better-than-projected state revenues, Newsom’s budget plan pays down two-thirds of the schools’ $11 billion in deferrals. It also marks the most significant involvement by the governor in the state’s charged school reopening debate since he introduced reopening guidelines in July that effectively kept most schools closed to start the year.

During his budget presentation Friday, Newsom affirmed his position that schools should be open for in-person instruction if done safely and spoke of his youngest children’s struggle learning remotely.

“Those kids are falling through the cracks, and we have all the support in the world,” Newsom said. “I can’t imagine what’s happening for millions of other children. This is why this is so important.”

But the governor’s reopening plan has come under criticism both from local school leaders who say it would do little to help districts most impacted by the virus, as well as teachers unions pushing against reopening schools as cases climb.

Los Angeles Unified superintendent Austin Beutner said Monday that the governor’s plan “falls well short of what’s needed to help our schools” because it neither sets across-the-board safety standards nor sets a requirement for when schools should reopen.

“It leaves the definition of a safe school environment and the standard for reopening classrooms up to the individual discretion of 1,037 school districts across the state, creating a patchwork of safety standards in the face of a statewide health crisis,” Beutner said. “And it reverses a statewide commitment to equity based funding of schools.”

Beutner, leader of the state’s largest school district, and six other superintendents from large, urban districts raised concerns about Newsom’s reopening plan ahead of its release. The superintendents pushed back against the proposed $2 billion coming out of the state fund earmarked for K-12 schools and community colleges. In a Jan. 6 letter, they said the proposal shuts many of their schools and students out of grant funding because they reside in communities with some of the state’s highest case rates.

The nonpartisan Legislative Analyst’s Office also raised concerns about the reopening plan, writing that the “proposal sets unfeasible time lines” in an analysis of the governor’s budget.

Suzanne Kitchens, president of the California School Boards Association, praised Newsom’s budget plan for easing the financial strain on schools by paying down most of the deferrals, as well proposing a 3.84% cost-of-living adjustment for schools, but added that “we have work to do on both the school reopening and summer school plans.”

“While some schools will undoubtedly take advantage of the incentives to reopen schools this spring, others are not in a position to do so given community health concerns, local standards, funding, resource staffing, and capacity limitations,” Kitchens said.

Newsom’s budget does not propose extending the school funding protections that held attendance-based funding flat this school year. The proposal assumes in-person learning as the “default mode of instruction” during the 2021-22 school year for funding purposes.

As California schools begin the new semester, most will remain learning remotely, many indefinitely. Some of the state’s districts, such as San Francisco, have yet to come to agreement with their local teachers union on how to reopen schools. Others, such as Oakland, have said they planned to reopen campuses once their counties reach the orange tier at the request of their unions — a requirement more stringent than what state public health officials allow for in-person learning. Los Angeles also resumes the year remotely indefinitely as cases there have surged.

A key distinction between Newsom’s reopening plan and legislation Democractic lawmakers introduced last month is that the governor’s effort does not establish a requirement for when schools have to reopen.

Assembly Bill 10, which legislators plan to advance this month, would require that schools offer in-person instruction starting in March once their county moves out of the state’s purple tier. The bill is in response to the fact that many school districts, primarily those in Bay Area counties, stayed closed after they had clearance from public-health authorities to reopen.

Teachers unions have pushed back against Newsom’s plan and AB 10, saying schools should not reopen without extensive health and safety measures and until after the state’s current surge.

“We are in the middle of a devastating COVID-19 surge, and any discussion of returning to in-person instruction is premature,” Jeff Freitas, president of the California Federation of Teachers, said Friday.

Other highlights from Newsom’s education budget include: