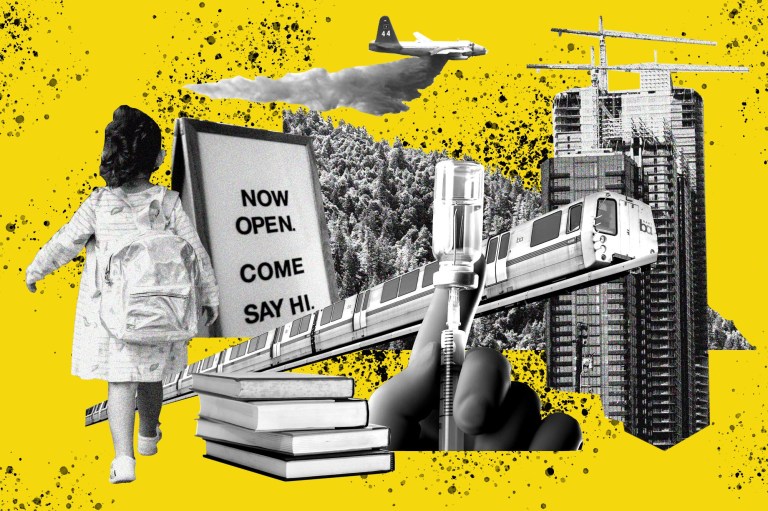 More than last year’s budget. More than the year before. More than any California budget ever.

Despite — or maybe because of — the last 10 months of arrested economic activity and unchecked viral contagion, Gov. Gavin Newsom introduced a record-breaking $227 billion spending plan for the coming fiscal year.

It’s certainly been a journey since last January. “We were talking about a 10-year expansion of our economy here in the state of California,” Newsom marveled at a press conference this morning. Then the coronavirus arrived. Lockdowns began. The number of unemployed Californians surged and tax revenue projections withered.

With his budget proposal today, the governor heralded what he framed as the beginning of the end. “We are on a much better fiscal footing than anyone could have imagined even a few months ago,” he said — so much so that the state appears on track to be forced legally to issue tiny taxpayer rebates next year.

As always, Newsom’s fiscal framework is only the opening offer in a half-year back-and-forth between the governor’s office and the Legislature. The state constitution requires a final budget for the coming fiscal year be passed in June.

But this rough draft from the governor’s office will set the terms of debate for the taxing and spending negotiations to come. As the ongoing public health and economic disasters threaten an increasingly credible political disaster for the governor — manifested in a mounting recall campaign — the proposal also gives Newsom a chance to prioritize and set a new tone for 2021.

Where’s all this extra cash coming from?

The unexpected cushion of cash in this year’s budget is made possible by the dismally low expectations lawmakers worked under last summer. In a profoundly pessimistic mood, the administration and legislative leaders lowballed their projected tax haul.

Blessed is he who expects nothing, for he shall never be disappointed.

In November, the state’s nonpartisan Legislative Analyst Gabriel Petek broke the “jarring” news: “As it turns out, revenues have proven to be much more resilient than that…We see a very large revenue windfall taking shape.”

Driven by a still-roaring stock market and stable earnings among the state’s highest earners and largest taxpayers, the governor’s new tax revenue projection for the current fiscal year is 20% higher than it was projected to be in June. “Folks at the top are doing pretty damn well,” the governor noted today.

That doesn’t mean state lawmakers can go on a spending spree. This year’s extra financial buffer is a one-time pot of cash, but the economic drag of the pandemic could last for years. The governor’s office projects long-term deficits in the $7 billion to $11 billion range extending into the next three years.

That fiscal reality will make it much harder for the governor and Legislature to introduce permanent new programs or expand existing ones.

“Given the influx of tax revenue coming from high-income Californians who are doing well, we have a responsibility to use our resources to help those who have been struggling. These communities have been neglected many times in the past,” Assembly Speaker Anthony Rendon said in a statement. The Los Angeles Democrat also said this was a chance to more quickly help people unable to pay their rents short-term, and to address a housing and homelessness crisis longterm.

And he stated the obvious: that California can expect more federal help from the incoming Biden administration.

Budgeting on the fast track

Newsom’s fiscal proposal is running on parallel tracks this year: one set at the Capitol’s standard, lumbering procedural pace, the other cranked up to high, we’re-in-the-middle-of-a-pandemic speed.

That fast track is reserved for roughly $5 billion in COVID-related policies that, in the governor’s view, are too urgent to be left to the constitutionally mandated five-month budget-writing timeline. It’s typical for governors to include “early action” items in their budget proposals. But they usually aren’t this big, ambitious or expensive.

“In this environment, we can’t wait as we traditionally have for the fiscal year to end — to adjudicate and dialogue around the give and takes of budget. There are certain things that require urgency,” Newsom said today.

He’s been previewing some of these insta-budget proposals all week. They include:

It’s not clear when these measures will be introduced — and once introduced, when and if they will pass. But Newsom said he hopes to see some of these policies introduced “in the next few weeks.”

A return to the pre-pandemic era for state spending?

Last summer, lawmakers got the budget to balance by drawing down the state’s saving accounts, rescinding a few tax breaks for businesses, cutting state worker pay and kicking the can on necessary payments — especially to schools.

The question going into this year’s budget cycle: How much of that will get backfilled?

The governor’s spending plan includes $9.2 billion to pay back deferred payments to public school districts. That adds up to about two-thirds of those IOUs.

The budget also seeks to restore some of the funding for higher education that last year’s budget gutted. And it introduces emergency grants for students struggling financially and proposes 9,000 new slots for the state’s chief financial aid program, the Cal Grant.

But at a time when early childhood advocates have been begging the state for support to keep child care facilities impacted by the pandemic open, the budget proposal shows no significant increase in investment in child care. Transitional kindergarten is getting a small boost with $250 million for expansion of the program for 4-year-olds and additional one-time funds that also can be used for facilities.

Newsom’s proposal “for the most part fails to heed this week’s call from more than 1,000 diverse groups around the state to prioritize kids in the state budget,” the advocacy group Children Now said in a statement. “California leaders must urgently address the fact that kids – especially kids of color, kids in poverty and youth in foster care – have been disproportionally impacted by the pandemic, and the learning loss and increase in mental health issues threatens their – and our collective – future.”

Some new budget fights, same as the old fights

Progressive lawmakers have been clamoring for years, though with increasing urgency since the beginning of the pandemic, to expand Medi-Cal, the state’s subsidized health insurance program, to cover undocumented seniors.

Newsom got on board with the idea last year but it foundered, along with so many other legislative ambitions, as COVID cases began to mount. Asked why the proposal was missing from his budget this year, Newsom emphasized how much more challenging the budget landscape is today compared to a year ago. “We have to be mindful of overcommitting $3 plus billion a year,” Newsom said, referring to the cost of expanding healthcare to undocumented seniors. “I believe in universal coverage…Right now the resources are scarce.”

“This is the most vulnerable population that is currently excluded from coverage,” he said. “They are particularly imperiled because of the pandemic.” He also said he was concerned that there was not more relief offered to people who are struggling to afford coverage under Covered California, the state’s individual health insurance market, after losing employer-based benefits.

This year’s budget proposal also includes a few tidbits likely to revive the perennial debate over housing production that pits the state against reluctant local governments.

It’s an urgent issue for the governor. During his 2018 election, Newsom vowed to oversee the production of 3.5 million units. But among the failed proposals to boost the production of housing was his ill-fated attempt to punish local governments that don’t permit enough housing by yanking their transportation funding. The governor’s office has also taken the Orange County beach town Huntington Beach to court for failing to build enough.

This year the governor is proposing to create a “housing accountability unit” which, according to a summary packet published today, will engage in “monitoring, technical assistance and enforcement of existing housing production laws.”

“This is to monitor city council meetings. This is to monitor board of supervisor meetings,” the governor said. “We’re not going to wait for an article to be written to be proactive in terms of holding local governments accountable.”

Newsom’s January budget proposal puts $1.5 billion towards his promise to phase out the sale of new gas-powered cars in California by 2035. About $465 million would go towards boosting incentives to purchase cleaner cars, trucks, buses, and freight equipment — including California’s Clean Cars 4 All program. Under the proposal, the state would also borrow $1 billion against future revenues to fund construction of electric vehicle charging and hydrogen fueling stations. “

“The Governor is rightfully prioritizing clean mobility and clean air for the Californians most vulnerable to pollution, poverty and pandemic,” Coalition for Clean Air policy director Bill Magavern wrote in a statement.

And picking up on a particularly old debate, the governor noted today that the state is on track to bust through a spending limit that voters added to the state constitution in 1979. Thanks to the Gann Limit, the state can’t exceed its 1978 spending level, per Californian and adjusted for inflation. Any revenue over that cap has to be split up and sent to school districts and taxpayers.

The Newsom administration’s Finance Department estimates that the limit will be exceeded for the second time in California history. But don’t count on that rebate check just yet. “We’re really not going to know exactly what the dollar figure is until (May),” said the governor.