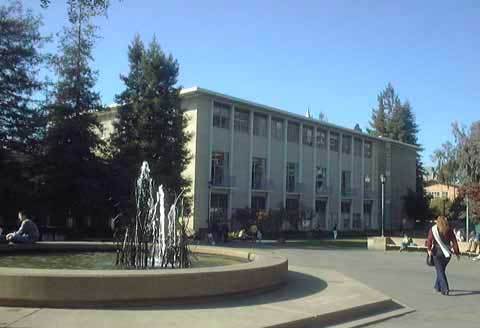 Kroeber Hall on the UC Berkeley campus is named for Alfred Kroeber, whose research on Native American artifacts is today considered illegal and immoral. (Photo courtesy of UC Berkeley)

University of California at Berkeley officials on Tuesday stripped another hall of its name, the fourth in a year’s time.

Kroeber Hall, which honored anthropologist Alfred Kroeber, was unnamed because he continues to be associated with the ideas of exclusion and erasure of Native Americans.

Kroeber is remembered as the founder of the study of anthropology in the American West. But he is also remembered for taking custody in 1911 of a Native American man he named Ishi, who became a living exhibit for museum visitors. The hall will be temporarily named the Anthropology and Art Practice Building.

UC Berkeley Chancellor Carol Christ said in a statement that some of Kroeber’s writings and views “clearly stand in opposition to our university’s values of inclusion and our belief in promoting diversity and excellence.” She added that unnaming the hall would “help Berkeley recognize a challenging part of our history, while better supporting the diversity of today’s academic community.”

Tuesday’s action “may seem like just political correctness, just a gesture, but it is a big gesture, because, for so long, names like Kroeber were untouchable.”

The now unnamed hall is the home of the Department of Anthropology, the Phoebe Apperson Hearst Museum of Anthropology, the Department of Art Practice and Worth Ryder Art Gallery. A proposal to unname the hall was given to Christ in July 2020 by her Building Name Review Committee, which in the fall reached a unanimous decision to remove Kroeber’s name. That decision followed an analysis of the proposal and a review of comments solicited from the campus community.

Eighty-five percent of the 595 respondents were in favor of removing the name, university officials said. Christ supported the committee’s decision and sought and obtained UC President Michael Drake’s approval.

One of the key reasons for seeking the denaming was Kroeber’s unethical and immoral practice, even for his time, of collecting or authorizing the collection of the remains of ancestors of Native Americans as well as curating a repository of them.

He also allowed an autopsy of Ishi’s body against the wishes of the man. Additionally, Kroeber pronounced the Ohlone people culturally extinct, contributing to the federal government’s failure to recognize the Ohlone and “leading to the Muwekma Ohlone Tribe having no land and no political power,” according to the committee.

A year ago, the name of UC Berkeley’s School of Law was denamed and in November Barrows and LeConte halls were stripped of their names.

Not everyone supported the unnaming of Kroeber Hall. Several faculty members said that the denaming was unjust to Kroeber, who did few if any archeological excavations in California but focused on ethnological research. Ethnology is a branch of archeology that involves analyzing and comparing of human cultures. The opponents also said the museum was a place for the remains of Native American people before Kroeber arrived at the university and he curbed the university’s emphasis on California archeology.