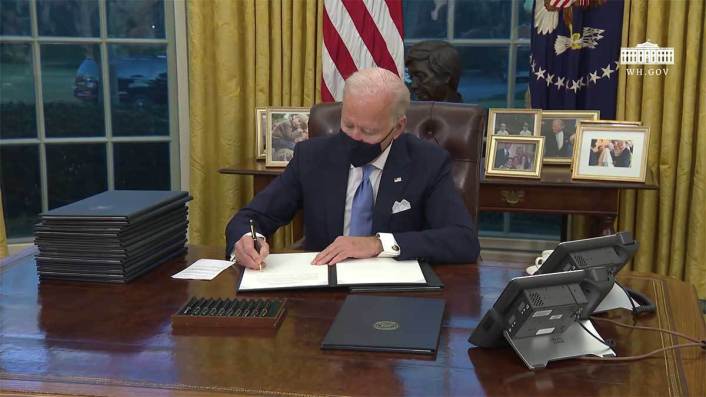 Among his first official acts Wednesday as the newly sworn-in president of the United States, Joe Biden tweeted from the @POTUS account, “There is no time to waste when it comes to tackling the crises we face. That’s why today, I am heading to the Oval Office to get right to work.”

On arrival, Biden signed the first several of a bevy of executive orders that kick off critical initiatives and reverse policies of the Trump administration, many of which have been subject to litigation in Bay Area courts.

Among the orders are several relating to the COVID-19 pandemic, including a directive that will require masks on federal property and launching a “100 Day Masking Challenge” that urges Americans to wear masks in that time period.

A number of orders seek to reverse Trump administration policies or actions on the international stage, including stopping the country’s exit from the World Health Organization and rejoining the Paris climate accord.

Another is intended to stop further construction of the southern border wall by rescinding the national emergency declaration that the Trump administration relied on to justify use of federal funds to build it.

One of the orders will extinguish the Trump-imposed restrictions on entry to the country from passport holders of seven Muslim-majority countries.

Among the other orders is the cancellation of approval of the Keystone XL pipeline and the reversal of many Trump administration actions on the environment.

The orders will also enhance protections of undocumented individuals who first entered the country as children — so called “Dreamers” — and expand protections against discrimination at work on the basis of sexual orientation or gender identification.

Executive orders are issued by the president to instruct the executive branch of government, including its departments and agencies, as to administration policies or provide direction on how those policies should be carried out.

An executive order is not a law — only Congress can create a law — but rather a direction to those in the executive branch as to how the executive power of the country is to be used in a certain area.

Recent presidents have made frequent use of executive orders. Former President Trump issued 212 executive orders, according to the Federal Register, somewhat less than his immediate predecessors (Barack Obama 276; George W. Bush 291, Bill Clinton 254) though each of those presidents served two terms and Trump only one.

Executive orders signed in the first few days of a presidency tend to reflect the incoming president’s positions on hot-button issues. Early executive orders issued by Obama included directives on the ethical responsibilities of executive branch personnel, the manner of conducting interrogation of individuals in the custody of the government, and the intended closure of the Guantanamo Bay detention facilities.

Trump’s first executive orders announced a policy of seeking repeal of “Obamacare,” enhancing security along the southern border, and restricting entry to the country of individuals from enumerated foreign countries — the so-called “Muslim ban.”

Just as the executive power of the United States is limited and constrained by the powers delegated in the Constitution to Congress and the Judiciary, executive orders are limited in their scope.

The courts have frequently been called upon to determine if executive orders are lawful. During the Trump years, litigation challenging his executive orders was common and the courts decided a number of cases relating to those orders, including cases relating to the Muslim ban, the building of the border wall, the census and the Affordable Care Act.

Executive orders alone will not resolve all the issues. In order to fully achieve the goals identified in many of the orders, Biden will need Congress to pass legislation, including a budget that appropriates funds sufficient to implement the priorities.