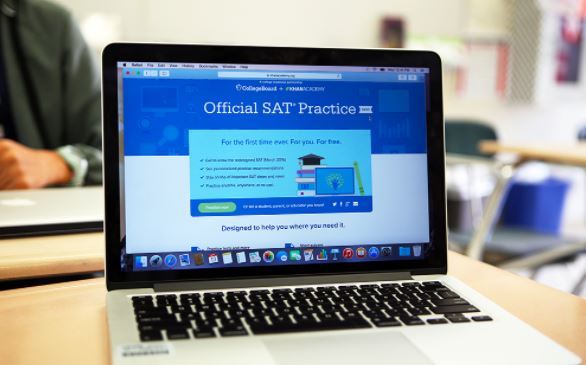 Students can practice with a free SAT online prep program. But UC will no longer require the test or the ACT alternative.

UC is being asked not to create its own test to replace the SAT. Students may instead be able to submit scores from 11th grade state exams.

After doing away with the SAT and ACT in freshman admissions, the University of California should not develop its own standardized test or use any other standardized exam as an admissions requirement, a key university committee has recommended.

Instead, the committee says UC should explore giving students the option to submit their 11th grade Smarter Balanced exams, the state’s annual standardized tests, for consideration when applying for admission to the system’s nine undergraduate campuses.

The committee determined that the Smarter Balanced exam would be an improvement from the SAT and ACT because unlike those exams, the Smarter Balanced test assesses curriculum that is aligned with standards being taught in the state’s public schools and with other UC admission requirements.

The proposal, which will be in front of the UC Board of Regents next week for discussion, is far from being final. Even if it is implemented, it would not go into effect for several years and the test would need to be modified for use in admissions.

Already, the idea is facing some pushback. In fact, a majority of members of a UC work group that was tasked with studying the idea were opposed to using the Smarter Balanced test at all when selecting students for admission and submitted a memo criticizing the work group’s final report for not accurately representing their views. That report, which recommended further exploration of using the Smart Balanced exams in admissions, was the basis for the committee’s final recommendation.

It’s also not clear what it would mean for students who don’t have access to the Smarter Balanced exams, including most out-of-state students, international students and private schools students.

Ultimately, the committee determined that the Smarter Balanced test “has several features that render it worth” consideration, including that it measures the Common Core standards that are taught in California’s K-12 schools. Those standards are integrated into California’s A-G course requirements that students must take to be eligible for admission into the UC and the 23-campus California State University, the state’s other four-year university system.

The committee also stressed that any use of Smarter Balanced exams in admissions should be low-stakes, which is why it recommended that UC consider giving students the option to submit their scores if they think it will help their application, without requiring them to do so.

“We propose that the Smarter Balanced Assessment be further studied and evaluated … and that it be considered for use in a manner that is different from the previous high-stakes use of the SAT or ACT,” UC Provost Michael Brown and UC Academic Senate Chair Mary Gauvain wrote in a letter to Michael Drake, the UC president. Brown and Gauvain were co-chairs of the committee.

Last May, the UC Board of Regents voted to drop the SAT and ACT as a freshman admissions requirement. The work group was subsequently charged with determining whether UC should create its own test or use a different standardized test in freshman admissions and asked to submit a recommendation to a separate steering committee, which would then make a recommendation to the UC President’s office.

The work group initially considered whether UC could develop its own standardized test. However, that idea was quickly ruled out, with the work group deciding it wouldn’t be possible to create a new test within the time constraints set by the Regents. The Regents specified that a new test would be needed for fall 2025 applicants, meaning that it would need to be implemented by spring 2024. The work group determined that it would take at least nine years to develop such a test.

Instead, the work group decided that it would be feasible to modify an existing test and, in its final report to the steering committee, specifically recommended “further exploration” of the Smarter Balanced assessment for admissions purposes.

In addition to being aligned with the state’s curriculum standards, the Smart Balanced test is also already administered free of charge to all public school students in California, meaning that there would be no extra cost for those students or their families.

Smarter Balanced scores for 11th graders also show wide disparities across racial and ethnic lines. For example, the report notes that in mathematics, 70% of Asian students and 45% of white students meet or exceed standards, compared to 20% of Black and Latino students. It is unclear, according to the work group’s report, whether the Smarter Balanced test is any more equitable than the SAT and ACT.

The Smarter Balanced exam is also offered just once to high school students, meaning they can’t retake the test in an effort to get a better score — something that was an option with the SAT and ACT.

The work group was divided over whether UC should explore using Smarter Balanced exams in applicant selection. Ten of the work group’s 18 members submitted a memo voicing their opposition to the use of the exam when selecting students for admission.

In that memo, the 10 members say that the final report “wrongly favors the opinion” of the work group’s minority “instead of our majority position.”

Rosner declined to comment Tuesday, saying it would be inappropriate to do so before the Regents have a chance to discuss the item.