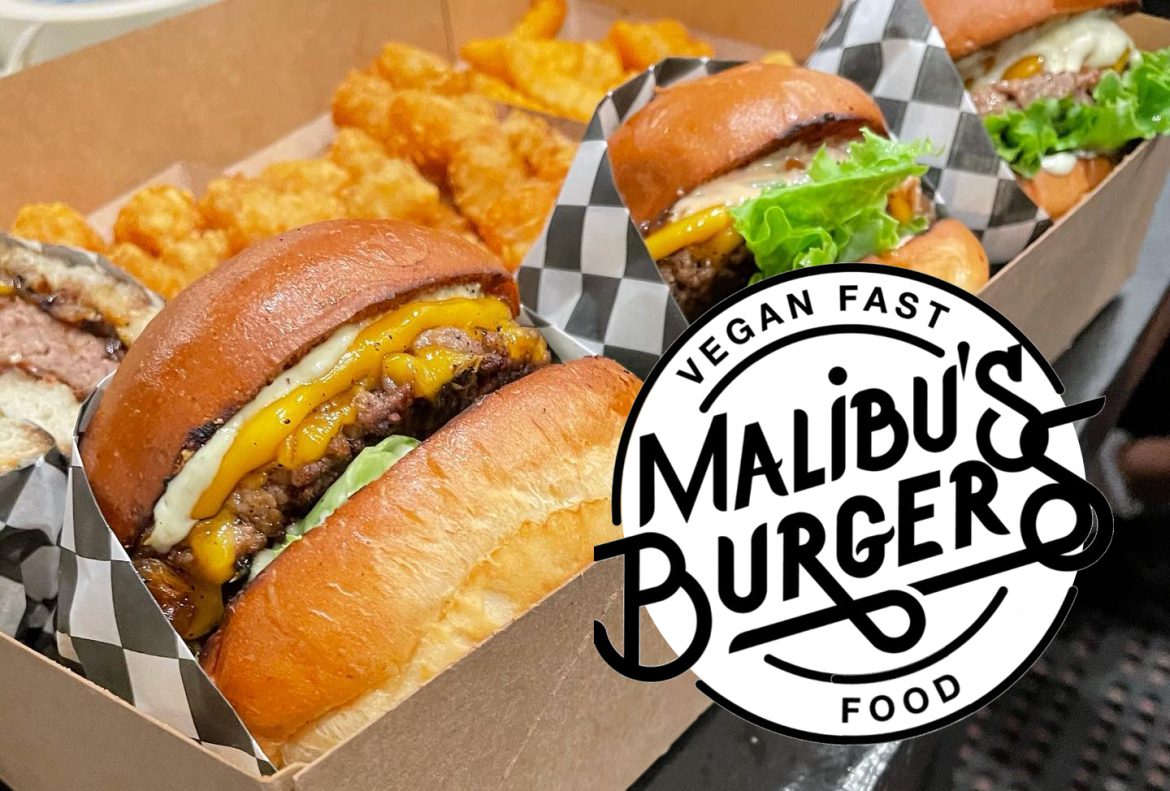 Malibu Burger’s recent move from a popup food truck to a bricks-and-mortar Piedmont Avenue storefront began with a devoted following to the elaborate all-vegan burgers and signature milkshakes hawked out of a black school bus across from Lake Merritt earlier this year. But with the launch of a GoFundMe campaign in July, Malibu owners—Darren Preston, Natasha Fernández-Perez and Wahid Brown—have accomplished the rare pandemic-era food industry success story.

Preston, also known as “Danny Malibu,” in an interview says the response was astounding. With customers and stakeholders such as Timeless Coffee and The Butcher’s Son already hooked on the shop’s addictive Needy Meat, Ghost Town and Tasha burgers, the La Lulu chicken (topped with its “secret” lizard sauce — a blend of vegetables, cumin and smoky guajillo pepper)—or the creamy milkshakes featuring ice cream provided by Eclipse Foods—Malibu Burgers in three weeks exceeded the $75,000 financial goal to raise nearly $80,000.

The 3905 Piedmont Ave location officially opened its doors in early Dec. to brisk business, which has continued, despite the ever-shifting county health guidelines.

“We actually grew during Covid,” says Preston. “We haven’t felt the effect too much. We’ve become friends with our base and they’re amazing.”

I hate to say it during the loss other establishments are suffering, but man, we’re happy to be serving Oakland and the Bay Area.”

Preston is a serial entrepreneur in many respects. Born in Brooklyn, NY, and raised in Queens by a singe mother, Lourdes Marquez, he moved to the Bay Area as a young adult. At first a manager for rappers, during which time he picked up the Danny Malibu nickname, he also developed a clothing design line and worked at various times for Safeway, Uber and the Port of Oakland. Inspired by a vegan burger he had during a trip to L.A., he decided Oakland deserved its own all-veggie based burger shop and began testing and perfecting recipes.

“The lizard sauce, it’s a secret exactly what we put in it,” he says. “My wife (and business partner) had a friend come over. I was wanting to impress her friend by being cool. I had been practicing for Malibu Burgers and offered to make them lunch and put some sauce together and it worked. I made it showboating.”

Other items required far more thought, research and testing. The soy-based faux bacon used on several burgers was selected because it successfully matches the texture and flavor of real meat. The same thing holds true for the Impossible Burgers and Beyond Burgers. “Some people get hung up on the difference,” says Preston. The Beyond Burger is pea-based and requires precise cooking to achieve maximum taste and texture. The Impossible Burger is soy-base and has heme. “Heme is in all living things and it cooks more like a real burger, so I prefer it,” says Preston. “But Beyond Burger has the best sausages so we’ll be launching new items [with those] soon.”

About the bacon, Prestons says, “I don’t know how they make it taste like bacon, but when you eat meat, you season things and you change the texture of it. Raw ground beef, after you cook it and season it, is completely changed. If you can match the texture and then season it right, a vegan burger tastes like meat.”

Naming the burgers provides the owners with a chance to salute specific locations in Oakland (The Ghost Town Burger) or Natasha (Tasha Grande) or Preston’s mom (La Lulu chicken patty sandwich), whose nickname is Lulu. And the Puerto Rican-spiced Thousand Island-style secret sauce called “Mama’s spread?” Preston says his mother invented the sauce for her own restaurant. “I got that one from her. I got permission from her before I used it.”

Preston is grateful for support in the early days given by customers and importantly, the owners of Timeless Coffee, a 100% plant-based coffee roastery and bakery a few blocks away on Piedmont Avenue. When the food truck/bus had mechanical trouble, they opened their kitchen so Preston and his team could make burgers and keep the business in operation. “There’s not really a lot of people jumping out the window to help Black people,” he says. “The people at Timeless, they don’t post anything about it or do a big “save-the-complex-thing,” they just have helped, which is a rarity.”

Similarly, Preston and his co-owners plan to support other Black-owned businesses in Oakland. “I’ve been blessed to make a living and be an entrepreneur. If I can bring people up with me, I’m going to do it.” Considering Malibu Burger’s track record thus far, believing Preston’s promise is as easy as sipping a Black Vanilla Milkshake and noshing on a Malibu Burger with all those addictive toppings.

For menu, hours and information, visit https://www.malibusburgers.com or visit them on Facebook at www.facebook.com/malibusburgers/.