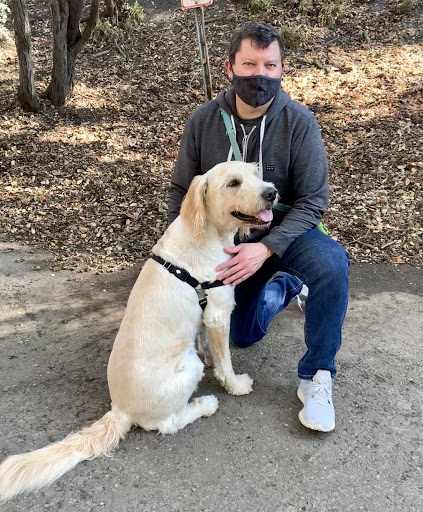 Adoption Story: We found him on Craigslist. There was a woman who was breeding her labradoodle with her friend’s golden retriever and she said there were two left in the litter. It was a Thursday and I asked if she could hold one until Saturday morning. She said sure, so we went up there and got the ninth out of 10 dogs and somehow they left us with the best one.

Likes: He loves cheese and he loves it when his grandpa, Mike Humphries, spoils him with jerky snacks from Costco.

Interesting Facts: He loves to greet people at the dog park. It’s his favorite pastime — maybe more so than playing with other dogs. As you can tell, he prefers to get up and get a nice pet from somebody as much as possible. He’s a super sweet dog.

Anything else we should know? He’s a neighborhood favorite. A lot of kids say that he reminds them of that dragon in The Neverending Story.