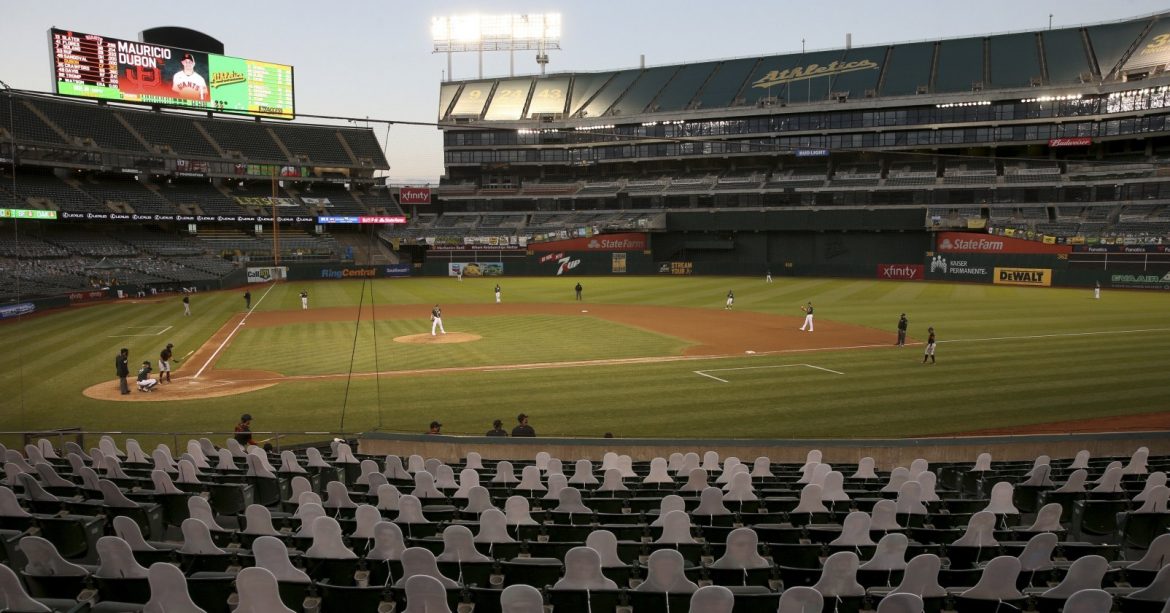 OAKLAND, CA - JULY 20: Fan cutouts are seen as the Oakland Athletics play the San Francisco Giants in the sixth inning of their MLB exhibition game at the Coliseum in Oakland, Calif., on Monday July 20, 2020. (Jane Tyska/Bay Area News Group)

As pandemic shutdowns intensify, more than a third of jobs in three California industries that rely on events — sports, performing arts and catering — have already disappeared. And they’ve been slower to recover than the state workforce as a whole.

While some California industries have managed to adapt their business models to the coronavirus pandemic, for many, the show simply cannot go on.

Spectator sports, catering and the performing arts rely on live events as the centerpiece of their business, and each has been decimated by the pandemic. Tens of thousands of Californians who work in sports arenas, the arts and catering have lost their jobs.

All three of these industries in California saw declines in employment of more than a third, and most of those jobs haven’t come back. As pandemic restrictions tightened this month throughout the state, there’s no recovery in sight for these hard-hit businesses.

Kent Wong, director of UCLA’s Labor Center, said the deep layoffs in these industries have harmed the broader California economy.

The three industries have had deeper cuts — and are slower to recover — than California’s workforce as a whole. While statewide unemployment rates rose to a record high of 16.4% in April and May, they fell back to 8.2% in November.

California’s special food services sector, which includes catering and food carts, lost almost half of its jobs between February and April — dropping from 74,400 to 37,700 employees, according to state employment estimates. Some of the jobs have returned, but most have not: The latest state numbers, from October, show 40,600 people employed in the sector, a decline of 45%.

Likewise, more than a third of the jobs in spectator sports in California that existed in February disappeared by April, as the number of jobs dropped from 13,300 to 8,600. Jobs have continued to vanish since then, with just 7,600 in the industry as of October, or 43% of the pre-pandemic jobs.

California’s performing arts, such as dance troupes, symphonies, operas and theatre, also saw a precipitous drop in employment this spring because all live events were cancelled. By June, 45% of the 15,100 jobs that existed in the sector in February were gone, and by October, just 1,600 of the lost jobs came back. That leaves the industry at 34% of pre-pandemic employment levels.

Large public events have been banned or heavily restricted in California since mid-March under health orders issued by Gov. Gavin Newsom and counties. And since early December, after a surge in hospitalizations, people in most of the state have been asked to stay home except for essential activities.

California was the hardest hit state for job losses in the creative industries, which include film, graphic design and music, according to a Brookings Foundation report in August. About 453,332 jobs were lost between April and July.

The most impacted sub-sectors within the arts nationally were the fine and performing arts, with a staggering 50% of jobs disappearing, the report concluded.

It wasn’t as if any of these industries were on solid footing before the pandemic. Many catering companies are mom-and-pop businesses without the capital to survive long stretches without a gig. The arts and culture sector is perennially underfunded in state and local budgets, relying heavily on philanthropy.

And unlike wealthy team owners and athletes, the concessions workers, ticket sales representatives, parking and security workers, interns and others who have faced the brunt of layoffs by the Dodgers, Giants, Lakers and other sports teams are typically low- or minimum-wage workers.

When these industries suffer, income from sales taxes in cities like Anaheim and Oakland decline, and income taxes also plummet.

Wong said many of the workers who lost their jobs are people of color, immigrants, contract workers and others without a “strong safety net.”

“Many of the workers within those industries already have a contingent relationship to their jobs and very few have other means of income, very few have benefits and any type of economic backup for their jobs,” he said. “We already had a situation of tremendous economic inequality based on race and immigration status — it has only gotten worse.”