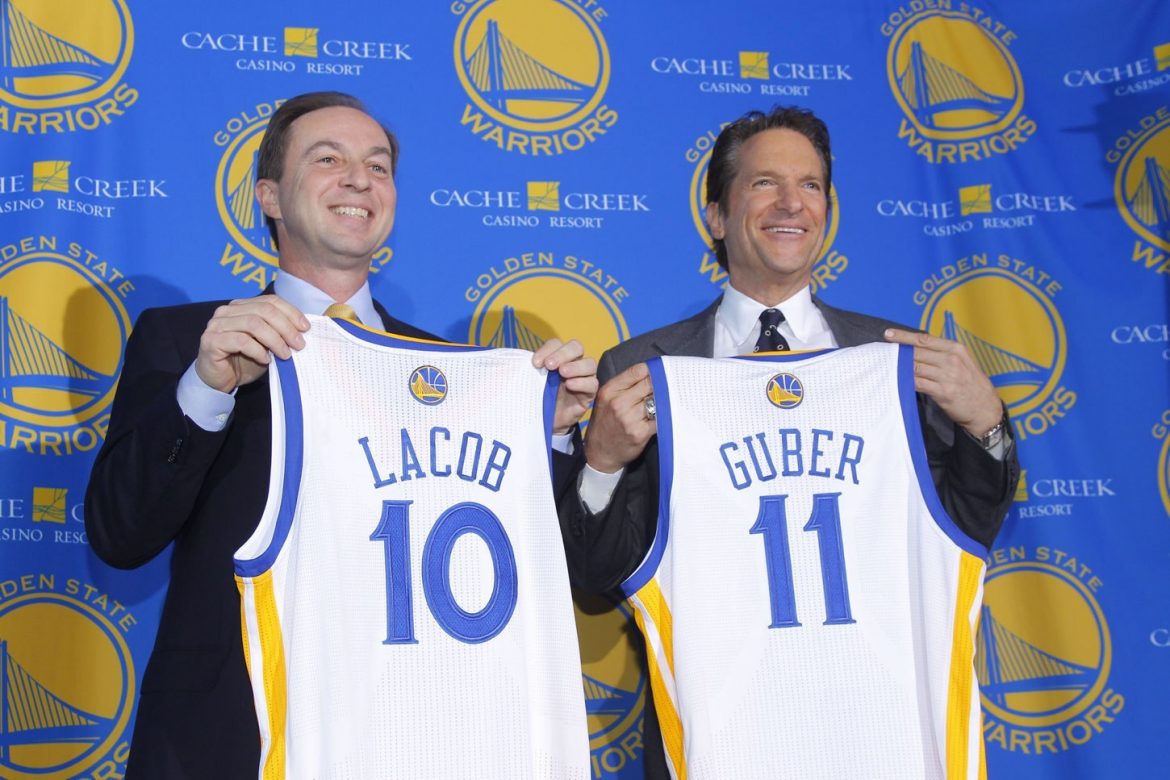 Warriors co-owners Joe Lacob and Peter Guber seem intent on squandering the goodwill their three NBA titles fostered, as repeated attempts to avoid paying millions they owe Oakland reveals them to be a cynical, disloyal ownership awash in hubris and greed.

The Dubs owners’ efforts to stick East Bay taxpayers with the team’s bill is oddly timed, as it takes nerve to desert a city and then expect its residents to pay your tab and root for your team.

Likable and accessible Warriors All-Stars like Steph Curry and Klay Thompson seem to be genuine, good guys who represent the best of sports. But Lacob and Guber have come to embody the worst. They’re part of this nation’s gilded and increasingly self-entitled billionaire class, pernicious individuals who have the most, but pull out all the stops to give the least.

It’s unacceptable. It’s unforgivable. And it’s really, really dumb, given that Warriors owners so obviously want to be seen in a positive light. For, when it comes to their franchise’s former homes — Oakland Arena and the city of Oakland — Lacob and Guber have behaved less like winners and more like deadbeats.

That is the indelicate but accurate word to describe people who have the means to settle their debt but simply don’t want to. In this case, sadly, it describes the Warriors’ ownership group, which still owes nearly $50 million to Oakland and Alameda County for arena renovations.

To be fair, the Warriors franchise has continued to make Oakland Arena debt service payments on time since they left for San Francisco a year ago, according to Coliseum Authority officials.

But as their repeated legal appeals reveal, Lacob and Guber clearly don’t want to pay. And they keep looking for a judge to agree with them.

In the past two years alone, the Warriors have lost three consecutive court rulings on the matter. But, like zombies in a horror movie, the team’s attorneys just … keep … coming. They recently filed yet another appeal, asking the California Supreme Court to overturn a state appeals court that in August reaffirmed two previous decisions the team lost.

“Our position has always been that we will pay what the courts determine we owe, if anything,” Warriors spokesman Raymond Ridder said. “However, the evidence is clear that the authority drafted the contract and knew that it would not require the Warriors to pay debt service under these circumstances. We remain confident that we are right, and we are always willing to fight when we believe that we are right.”

“Warriors owners have created a pattern of failure since deciding to waste money and energy and destroy decades of fan goodwill by fighting to steal tens of millions of dollars from struggling Oakland taxpayers,” Kaplan tweeted earlier this year.

Oakland loyally supported the Dubs for decades, even when the team was a laughingstock. Now, as the coronavirus pandemic has battered Oakland — and all other cities nationwide — the Warriors have a chance to return the favor and show loyal support to The Town in its time of need.

Fat chance. Instead, Lacob and Guber are taking the deadbeat route, relentlessly going after funds that belong to Oakland and Alameda County taxpayers.

The move to San Francisco

The dispute started a few years ago, when the Dubs were preparing to leave Oakland for the Chase Center, the team’s new $1.4 billion arena in San Francisco.

First, the Warriors broke ground at the Mission Bay site in a comically over-the-top ceremony that featured, among other things, dancing construction cranes.

As Chase Center construction proceeded, the team told the Coliseum Authority it did not owe the remaining debt on Oakland Arena, which was renovated for the Warriors in the late 1990s.

The Coliseum Authority disagreed, noting that the license agreement states if the Warriors terminated that contract before June 30, 2027, the franchise would have to pay any debt in connection with Oakland Arena construction. Eventually, the Dubs and the Coliseum Authority took the matter to arbitration, where the team’s lawyers argued they were letting the arena’s lease “expire” and technically were not “terminating” the agreement.

In October 2018, Judge Rebecca Westerfield ruled for the Coliseum Authority and against the Warriors attorneys’ use of semantic technicalities.

“The Warriors draw too fine a distinction between the term ‘terminate’ and ‘expire,’” Judge Ethan Schulman wrote in his April 2019 decision. “The authority contends that the Warriors terminated the license agreement by deciding not to exercise their option to renew. The arbitrator agreed with that position. The court finds that the arbitrator did not err.”

I thought at that point the Warriors would drop the matter. Their deeply talented team had started a playoff run they hoped would end with the Dubs’ third consecutive NBA title and fourth in five years. Shouldn’t they focus solely on basketball, as well as on moving into their glitzy San Francisco arena?

Lacob and Guber apparently had other plans. Then again, so did the basketball gods.

Bad breaks for the team

For the record, I don’t believe in karma. I’ve seen too many bad things happen to good people and vice versa. But what happened next to the Warriors franchise is as strong an argument for karma as you’ll ever find.

On April 15 — three days after Schulman’s ruling — Warriors center DeMarcus Cousins suffered a torn quadriceps muscle in the first round of the playoffs. Three weeks later, Warriors superstar Kevin Durant injured his calf in the Western Conference semifinals. Despite missing those key players, the Dubs advanced to the NBA Finals. Golden State faced the Toronto Raptors in Game 1 on May 30, 2019 — the same day team attorneys filed an appeal to Schulman’s decision.

The Warriors’ roster has been a M*A*S*H unit ever since.

Center Kevon Looney fractured his collarbone in Game 2 of the NBA Finals. Durant tried to play on his bad leg in Game 5 and ruptured his right Achilles tendon. All-Star guard Klay Thompson then tore his ACL in Game 6, which the Raptors captured to win the NBA title.

Durant and Cousins left for other teams before the 2019-20 season, the team’s first in San Francisco. Superstar Steph Curry missed the majority of the inaugural S.F. year because of a broken hand. Injuries also forced Looney and forward Draymond Green to miss regular season games. Thompson’s knee injury led him to miss the entire season, in which the Dubs were the NBA’s worst team, going 15-50 in a coronavirus-shortened schedule. It was their first losing season since 2012.

The storm cloud over the Dubs franchise has not abated.

Two weeks ago, Thompson sustained yet another season-ending injury, tearing an Achilles tendon 17 months after his ACL tear. The same day, San Francisco officials rejected the Warriors’ plan to host games at 50% capacity next season, saying the latest surge in COVID-19 cases made it unsafe for fans to sit inside Chase Center.

You know Chase Center — that pricey gymnasium where an alarming number of tech bros mix with the last of the bay’s old-school hardwood fanatics.

For the love of money

Chase Center is where Warriors games now have VIP luxury boxes called Google Suites that cost $2 million a year, offer their own wine cellars and come with their own butlers.

It’s the same Chase Center about which Warriors executives bragged last year they had booked $2 billion in concerts and other events.

Earlier this year, Forbes magazine pegged the Warriors’ value at $4.3 billion, making them the NBA’s third-most lucrative franchise. Lacob and Guber bought the club in 2010 for $450 million, meaning the Dubs franchise has increased in value by nearly $4 billion in just a decade. After Thompson’s injury was announced on Nov. 19, the Warriors quickly replaced him by acquiring guard Kelly Oubre, which will reportedly cost the team tens of millions of dollars in NBA luxury tax fees, which punish franchises for spending above league-mandated limits.

Good for Dubs owners that they’ve enjoyed such a strong return on their investment. And good for fans that their team is willing to spend to win.

Having billionaires pay their fair share shouldn’t be too much to ask, especially from San Francisco’s “Google Suite Warriors.”

Word is, Joe Lacob doesn’t care much for the nickname “Joey Lightyears.”

That is because it stems from an infamous 2016 New York Times article in which Lacob — apparently thirsty for validation — eagerly told the reporter that the Stanford cafe they were visiting had named a sandwich after him. Even worse, Lacob boasted that his Warriors front office was so intelligent it was “light years” ahead of other teams. The quote reportedly angered other NBA execs who surely cried no tears when the Warriors’ fortunes plummeted overnight last season, becoming the league’s worst team in an injury-plagued year.

Winning makes everything smell better, former Raiders coach John Madden famously said. But Curry, along with Thompson and Green, won’t be around forever to deodorize this ownership’s stench. Once those surefire Hall of Famers are gone in a few years, what will the Dubs have left? Greedy owners thirsty for attention but utterly graceless and unlikable when placed under the unforgiving glare of the spotlight they crave so much.

So, here’s a wild idea: Maybe Lacob and Guber can pay what they owe. Not anything special. Not a handout. Not a “Lightyears Tax” or anything crazy. Just keep paying their debt on time like the rest of us, as three court decisions have ordered them to do.

The Warriors have backstabbed the city of Oakland by leaving. I only urge them to show some restraint and decline to twist the knife.

That New York Times article made it quite clear that these owners — especially Lacob — want so badly to be recognized as winners. That’s what makes their relentless legal actions so puzzling. Instead of looking like champions, this latest appeal makes the Warriors owners look like weasels, trying to welch on their debt and get away with something they don’t deserve.

It reveals Lacob and Guber as lacking loyalty, class and honor.

All the important stuff in life that money can’t buy. Qualities so rare and priceless, even the best Google Suite butlers couldn’t find them for you.

C’mon, none of this is complicated. The Warriors should simply do the right thing and drop the courtroom appeal.

When it comes to misunderstanding the difference between the two, unfortunately, Lacob and Guber are light years ahead of everyone else.